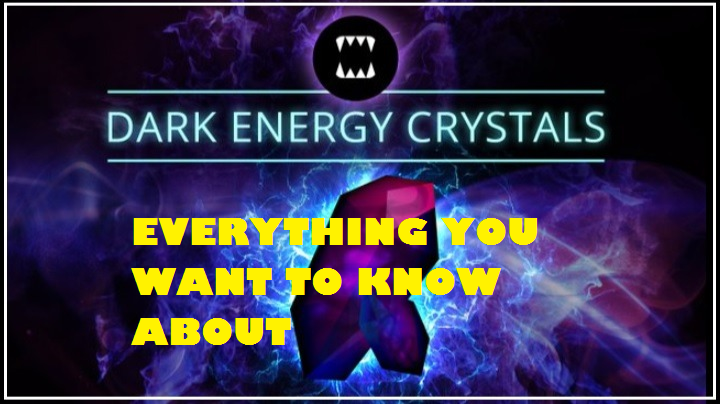 Since the SPS token introduction there has been a lot of hype and focus around the new token. It makes a lot of sense that is so when the token is new and players of all walks of life trying to accumulate them. However one of the original tokens of the game Dark Energy Crystals (DEC) has been somewhat over shadowed by SPS excitement. Here in this post we will look at DEC and what value it holds in Splinterlands. 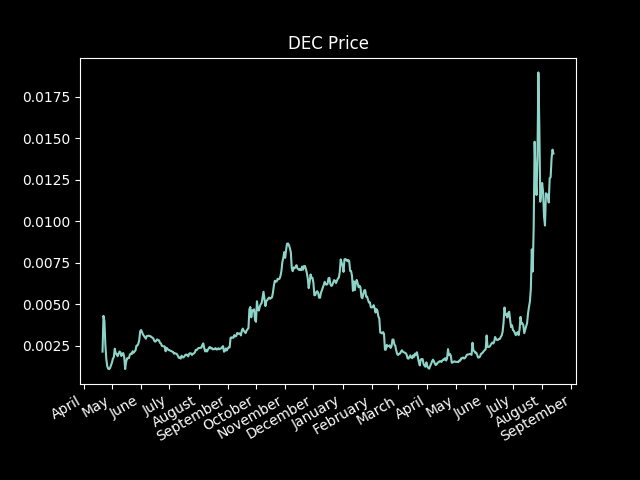 The recent price of DEC has reached all time highs so it would make sense to talk about why may be the causes and what to expect in the future for DEC. In addition we will learn what roles DEC plays in the Splinterlands ecosystem.

The token can be used to purchase in game items such as potions, booster packs, and card skins. Where used in game the DEC is pegged to $0.001 = 1 DEC. The peg is held up due to the booster packs costing $2 USD each and hence 2,000 DEC per a pack. (As of current writing of blog post the in game no longer has any packs for sale.)

How to Obtain DEC

There are two ways to obtain DEC. The first one is to burn, destroy, a card to obtain its equvailent DEC value. In game we call this the card's DEC burn rate. For instance example below of Giant Roc Alpha a 19 BCX has a DEC burn rate of 570 while a 10 BCX has 300 and so on.

There is a table summarizing the 1 BCX of each Splinterland's DEC burn rate. the DEC burn rate is determined by its card series and its rarity. 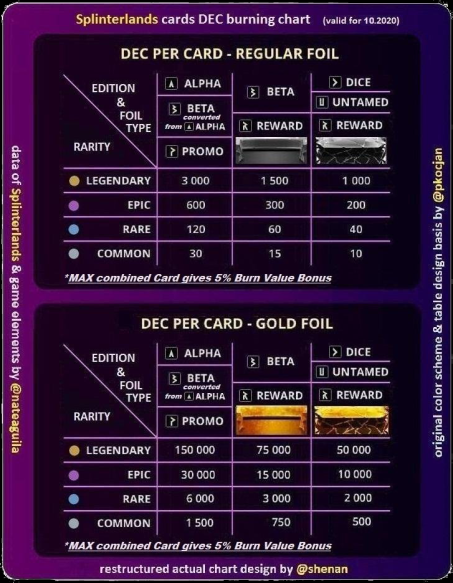 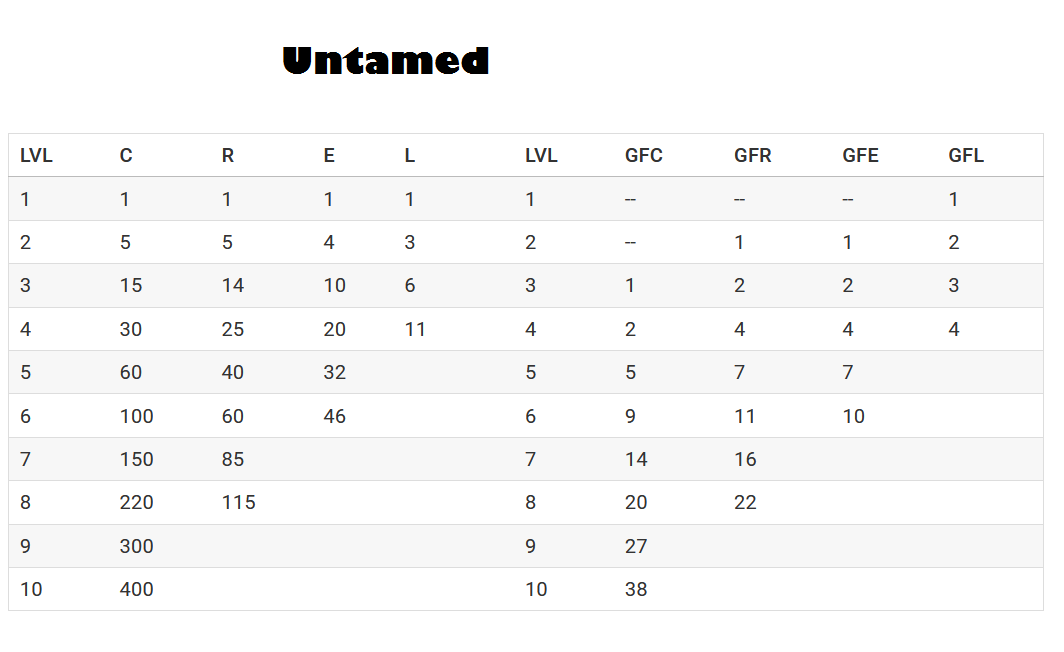 An example of reading the charts is in Untamed epic cards it takes 46 bcx to make card maximum level. That means if player combines 46 of the same card they will have a max level card and a burn rate of the card at 46 x 200 x 1.05 = 9,660 DEC. It is the same process for all cards. Reward series will have same charts either as Beta or Untamed depending on the type of card border of the Reward card.

The second way to obtain DEC is through play to earn in game. DEC is a token rewarded in winning battles and obtainable in opening reward chests. But the main way to earn DEC is through battles. Every day DEC is held in a pool and distributed to winners of battles that happens through out the day. By default DEC pool daily starts at 1 million tokens and is drawn down by winners of the battles.

Factors that effect the draw down of the DEC pool are as follows (in no particular order):

It is worth mentioning when DEC originally came out there was also a fixed allocation of 100 million DEC held by the game's developers as liquid asset that could be used for future use in promoting, advertising or used in some form to benefit the game itself. This allocation would be separate from the daily pool distribution.

Above list of bullet points we had showed also relates to how players are earning more DEC per a battle win. The actual math involve in calculating the exact amount of DEC won as the following:

The DEC amount operates on a quadratic curve meaning that a player with double the rating of another player will earn 4X more DEC after each Ranked battle win.

The following chart is based on depreciation of the DEC Capture Rate Bar from 100% down to 70% with respect to one DEC per win. Of course users of the chart will have to add a multiplier to one DEC depending on ranking during their battle won. 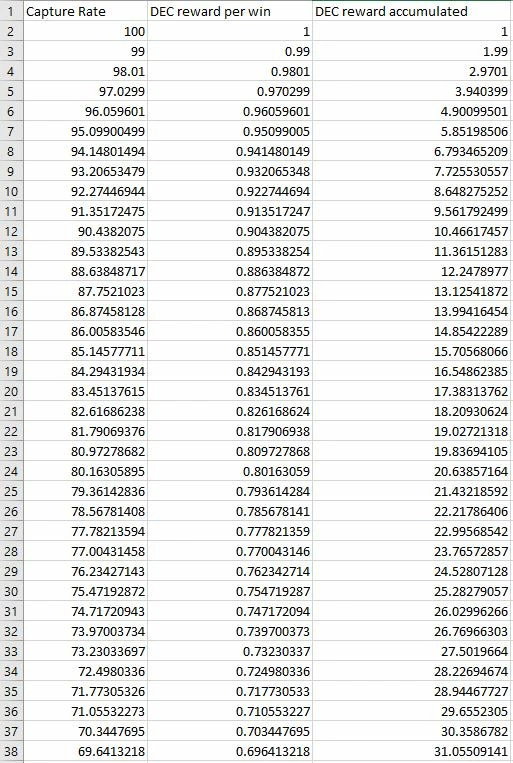 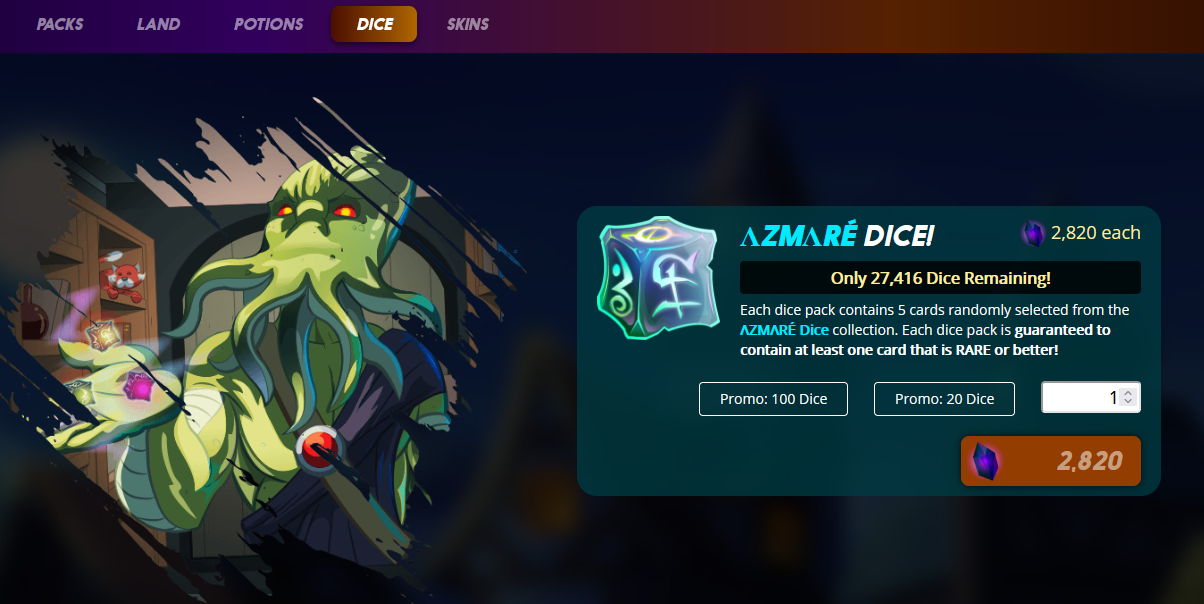 As mentioned earlier DEC is pegged to $0.001 each and used in game as a currency to purchase digital assets such as booster packs, potions, plot lands, orbs, dices, and skins. As of currently writing of this post only dice booster packs and skins are available for purchase. All other items are sold out.

A more recent game update has now allowed DEC to be used to rent cards daily. The new use of DEC is likely feeding into the demand of having DEC.

On top of all this is of course SPS air drop where players who hold DEC in their accounts increase their overall score which in turn earns them more daily SPS per air drop.