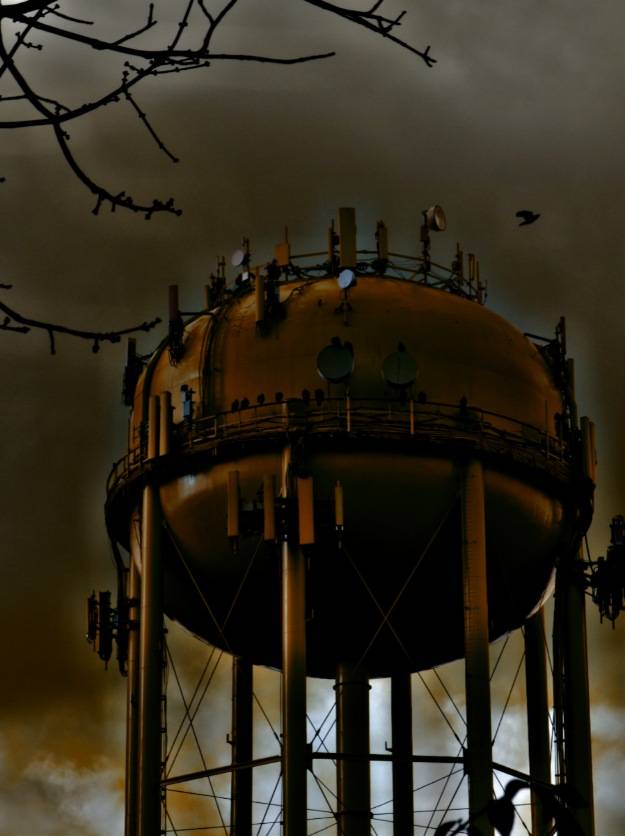 Welcome once again to another part of "Document 13", a dystopian graphic novel I'm creating with my daughter. She is currently working on some concept art for how she wants the world to look. Hopefully that means next week I'll have a new image for my posts.

Love it? Hate it? I welcome any and all feedback!

The year is 2074, the world has been plunged into darkness. One girl, Sarah Doe, will learn the secrets of the dark forces that run the ruined world. With the help of a few friends, her family, and her own powers she will fight to return the world to an order not known since well before her birth. Will she succeed? Read to find out!

If you haven't read the other parts, go back and read them first!

Scene: Kitchen pantry. Ruby is moving a false wall and helping Sarah into it.

R: You’ll be safe in here, child. Stay here until I come get you. I have to get you a suit…

R: I don’t know. Somebody up there must want you alive, but you won’t live long if you stay here. I’ll get you what you need to get out of the city, I have friends outside who can take you someplace safe.

R: I don’t have time to explain. Wait here. And don’t go tryin' to kill yourself again!

Ruby replaces the false wall and leaves the pantry.

Scene: Suit room attached to the airlock. The two orderlies are carefully counting the suits hanging on the wall.

O2: Count them again. We searched the dome, she isn’t here.

O1: All here. Do you think she’s just outside? No one can make it far…

Ruby stops just outside the door. She can hear them talking.
O2 returns from the airlock.

O1: What the hell? The Headmistress is going to kill us!

O2: Do you want to tell her or should I?

They flip a coin.

Ruby walks away quickly as O1 comes out and walks towards the hm office.

Scene: A week later in the pantry. There is a makeshift bed set up and a small table and chair. Ruby is teaching Sarah to read.

R: Girl, you’re doin’ very well. Don’t beat yourself up. It’s only been a week. I’ve never seen anyone read like you.

S: Why do I have to learn to read, anyway? I know how to survive…

R: You have to be able to read the signs to the outside…

S: But why’s it have to be such a dark book?

R: You start with the Good Book, then you can read what you like. It’ll teach you a bit about this mess we are livin’ in.

R: Oh girl, had you heard the stories my momma told me, you’d understand this is hell. There was a time when the sky was blue.

R: She swore it. But even then they said the world was endin’. Wars, weather, plagues… They tried to stop it all and we ended up in this mess. Well, that and the volcano. But even that was man tryin’ to play God…

R: You keep readin’ and one day you’ll find out!

Orderly 1: No, ma’am, we still haven’t found any sign of her.

O1: Yes, ma’am. But it’s getting exhausting taking 12 hour shifts. Perhaps if we could get some of the other orderlies to take a turn….

Hm: No! We can’t let anyone else know we have a potential escapee. We have already had to tell the other orphans that she is on an extended fundraiser.

HM: You’ve been tracking who goes in and out, correct?

HM: And all suits are accounted for?

O1: Yes ma’am… we think she has to be in the compound…

Hm: We searched it a dozen times. No one is acting suspicious?

O1: No more than usual. chuckles

Hm: This is serious! She was our best fundraiser, despite her betrayal. We can’t have her loose and talking to the other orphans. If she is hiding it is imperative that she is found!

O1: Perhaps we should question the staff?

HM: And how do we do that without raising alarm?

HM: Fine, but if anyone gets suspicious you’re out without a suit!

O1 backs out of the room with his head down. HM taps the table impatiently.