Everything you need to know about programming languages

I took a Deep Dive into programming theory, and I put together a guide to help you find out which programming languages are good for what, and what doors they can open for you in the world of work.

Generation Z - the digital children of the 21st century - have grown up using a wide variety of software, apps and mobile applications, and are much more open to learning more about technology than their elders. Confident programmers can earn big salaries even as entry-level employees in large IT companies - and for young people, this can be a powerful motivation to learn a profession.

I want to be a developer, how do I get started?

The first step is to clarify which area you are interested in. Front-end, back-end or full-stack, mobile software, embedded software development require different skills and knowledge.

The frontend (FE) developer is responsible for the user interface (UI); this is the environment that users encounter. It is his or her job to incorporate the visual elements created by the designer. To do his or her job, you'll need HTML, CSS, and JavaScript, as well as frameworks such as Angular or Bootstrap.

The backend (BE) developer is responsible for server-side development, i.e. how the website works and ensures communication between endpoints, as well as optimising security and performance efficiency. Today, the vast majority of websites are dynamic rather than static, so a BE developer must also be proficient in database languages such as SQL or PHP. The most common programming languages used by backend developers are Java, Python and C/C++. 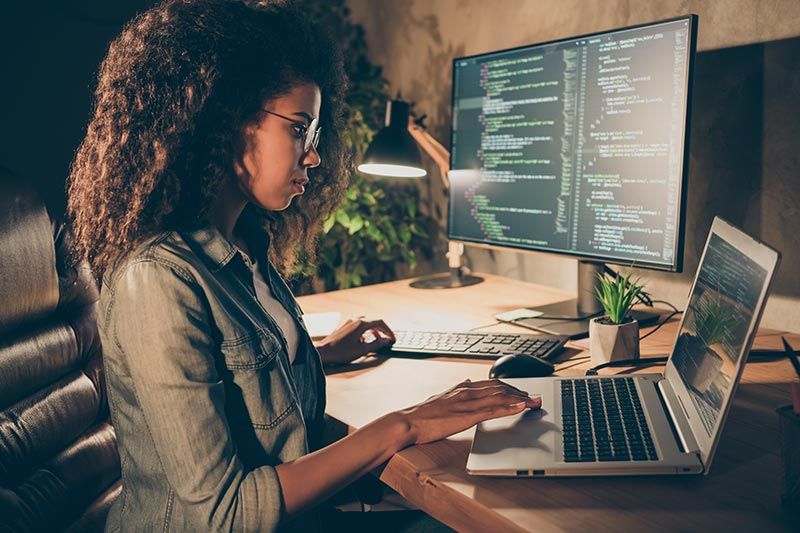 A full-stack (FS) developer can work on the front-end or back-end using a web framework, usually Java, Python or C#. Their tasks include design, testing and implementation. A good FS developer needs a solid knowledge of both FE and BE, so it is worth spending a few years in-depth on each of them separately, so that they can then confidently apply them in their work.

Mobile software development is also a really exciting area, with a distinction between Android and iOS operating systems. Language skills are Java for the former and Swift for the latter. Their development requires a different logic than a web application: the duration of the app has to be taken into account, the program has to handle different screen resolutions, notifications, and hardware and software differences.

Embedded software developers are responsible for programming mechanical or electronic devices (drones, robots, cars, airplane components) that perform so-called target tasks. An electrical or other engineering degree and IT skills are essential for this job, but these professions almost always involve circuit design, so knowledge of some design software (e.g. CAD) is also required. Learning the C/C++ programming language used here will be child's play once you have a broad knowledge of IT. OK, but which one can I use the most?

To be a really good developer, you need to be a good communicator, as well as a good coder, and you need to be able to work well in a team and be adaptable. Today's IT sector is constantly changing, so knowing one programming language is not enough to build a career as a programmer.

If you want a secure job as a beginner, you should be confident in coding in at least two languages. Java, C# or Javascript are a good starting point, as these are the programming languages currently used by most companies offering jobs in various countries, for example in Hungary (from where I am from).

Thank you for reading. I hope that you find this Deep Dive useful/helpful.