Brawl Report #26 Back in Action Again! This is my first report in a couple of weeks I think, I was on vacation without a great internet connection, and I came back home testing positive for COVID, so things don’t always go the correct way you want. However, I am feeling better, I know it will take me awhile to get to where I was, mostly with my lungs and getting moving, but I will get there, in the meantime, we start our 26th brawl report.

I am still with the Pizza family in the Stuffed Crust guild!

As I post this SPS is currently trending at $0.085, it has been bouncing, the big up didn’t happen like many people thought it would with the sale of the nodes. I still think it is a good time to buy, speaking of that, there are 370,489 packs to go until the next airdrop, a legendary life summoner.

The guild filled 10 out of 13 spots this time around, we do need to work on filling those 3 spots, granted we have few members on vacation, so it makes it a little more difficult. I am rocking the Novice, Chaos Legion only fray, with 7 fights this time around. Next time the pizza jokes will come back.

Battle #1
We begin in the enemy arena, apparently I will have more in the enemy arena, so that is not fun. This one consists of Little league, Poison, and only 20 mana, So I am going fire on this one, for the platoon and the chemist, meanwhile, I am going to hope that orella abadon with sneak can do enough damage to stay alive for a little while. However, this one looks like they didn’t want to show up to their own party, they fled, so I won.

Battle #2 (Link)
This one we are at the home arena, which provides some bonuses, such as we win draws and they can’t use obsidian. This one is 40 mana, along with earthquake and knockout. I am going to go water on this one, even though I do not have flying, the extra shield will hopefully give me enough time to take them out! They went dragon, which with all of that yellow over there, does not look good for me. I put on a good show, just not enough, it was bad enough my monsters hid for the picture!

Battle #3(Link)
Running back to the enemy again with Blast, Lost Magic, and 24 mana, that makes it rough. I went fire on this one, I figure the shield up front followed by Chimney can do some damage to the front warriors. I think they had a similar idea; they went fire as well. However, my lineup seemed to be a little bit better, not to mention just the amount of damage that Chimney does in a hit helps to take people down quickly. 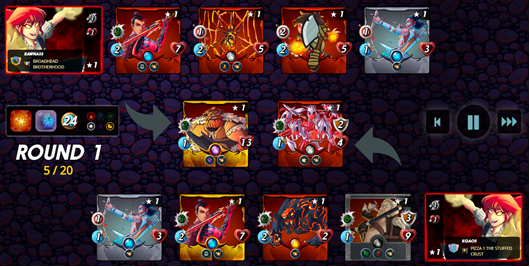 Battle #4 (Link)
This one is in the home arena with 23 mana, close range and heavy hitters. Think I might go a little crazy on this one, with water, double opportunity, but a heavy magic hit as well, which doesn’t leave me too much for tanks. They went water as well, but with a more typical line up. Luck pulled through with me on this one.

Battle #5 (Link)
Leaving the home field again on this one with 27 mana, little league, and earthquake rule sets, not to mention, only death and dragon can be used. Since I do not have a dragon summoner, it is death, but not a lot of hit points on this one either, this will be a quick fight! It went to fatigue, 25 rounds, it was kind of fun to see the counter go on this one, but it became a draw, which is good since that guild did not have the barracks up a level. 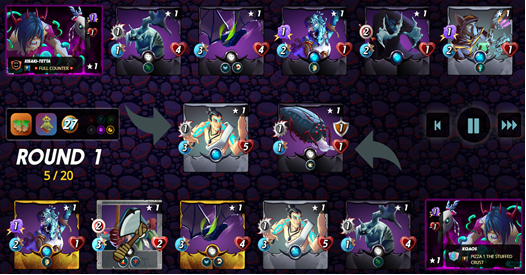 Battle #6 (Link)
Second to the end on this one, we are looking at the home field and the advantages that it brings, 16 mana, NO Neutral monsters and all ranged monsters have the snipe ability. I am going water on this one for the double opportunity attacks, plus the one ranged, but I also want that shield since the enemy cannot use obsidian. They went water as well, probably the same idea, only they went with a healer and a gladiator. However, the gladiator was too much for me to handle. 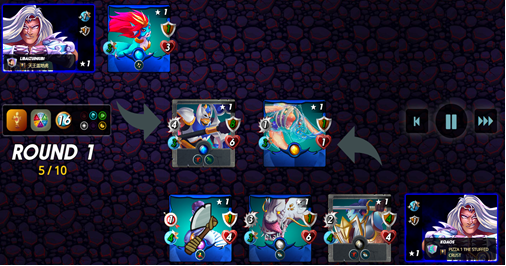 Battle #7 (Link)
Last battle, away, not feeling too confident in this one, I just haven’t been doing well with this brawl. They banished Tarsa, which is not even a choice here, but it is 26 mana, Weak Magic, along with enrage. I am trying something a little different with earth, grund up front for the double attack, katrelba in the back for the double attack, and queen mycelia for the armor, but no healing, the scavo hireling for getting back some armor, hopefully it goes well! They went with something similar on this one, but with some healing, but I also have my gladiator, which stole the show! A good win for me! 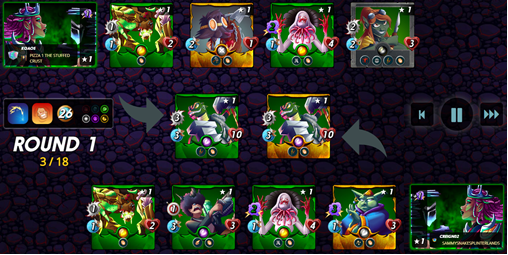 So, with 14 in a half hours to go, I am sitting on, 2-2-1, not great only 2 battles left, I feel I am letting the team down. However, the guild right now we are sitting in 2nd place with 22 wins and 11 losses, plus my draw. Still have a good amount of battles to go, hopefully it will go in our favor!

Thank you for reading this far, additionally, I do want to thank the people in Pizza, a great place to hang out! I have learned a lot from it and there are great people and a very positive community.
You can find them here: Awesome Pizza Discord

I’m starting to track the Pizza token a little bit more as well, it is currently sitting at $0.02538 a great time to stake that 20 Pizza to get that badge!

At some point I will be doing some other posts about my experiences in Crypto, but here are some links if you are interested in some other NFT Games or other games as well!

Splinterlands
If you use my referral link I will send you 100 DEC to get started!
Layer 2 Labs
A Great community for Splinterlands, with games and a faucet to help players as well, new name, was Splinterlabs.
Rising Star
Great music NFT and a way to support up and coming musicians!
Sorare
Still learning this one, but it is a football (American Soccer), easy to set up and go!
Star Citizen Referral code: STAR-LRKQ-D6NK
Space game, still in alpha development, playable, very immersive, sign up with the referral code it will give you money in the game along with both of us receiving a free ship!
Unmineable
A great way to get into Crypto mining, easy to set up, code gets you a 0.25% fee discount, uses the graphics card while you are not using your computer, or you can mine with just your CPU.

Let me know if there are any questions, you can find me in the messages here or in the Pizza Discord.

Lastly, thank you again, remember you are awesome and have a wonderful week!
Dr. Kqaos

Photos come from PowerPoints stock image, Bitmoji with Splinterlands logo on top of it, or my own screen shots of Splinterlands
Disclaimer: This is my opinion, not financial advice.