One of the ways Digimon Story Cybersleuth: Hacker's Memory expanded upon Cybersleuth is by adding a new type of battles for the game: Dominion Battles!

They're team battles (3 vs 3) in which hackers team up to gather the Points for the team. The first team that gathers a certain amount of Points wins. Before I started Hacker's Memory, I didn't watch any gameplay trailer for it. (I intended to play it after Cybersleuth either way, so I didn't bother.) I was surprised when the game introduced a new type of battle when the game prompted me to make a team of 3 Digimon.

They're called Domination Battles in the US version, but I love the term Dominion that's used in the Europe PS4 version and the PC release.

Domination Battles are 3v3 battles in which groups of hackers team up on a board in an attempt to collect the most points.

Points come in either 1, 3, 5 or 10 and the first team to reach the required amount of points wins.

The setup of Dominion Battles makes that part of Hacker Memory feel like a Strategy RPG/Tactics game. Each character is a piece on the grid. When a fight happens, it only lasts one turn before going back to the gird. (This reminds me of Devil Survivor series.)

The focus isn't on defeating the opponent, but on the strategic placement of these pieces to earn the most points. Two characters can even use their turns to gang up on the same enemy.

The number of turns is also important. There's a Turn Limit in every Dominion Battle I fought by now. In all of them, getting past the turn limit was a loss condition. 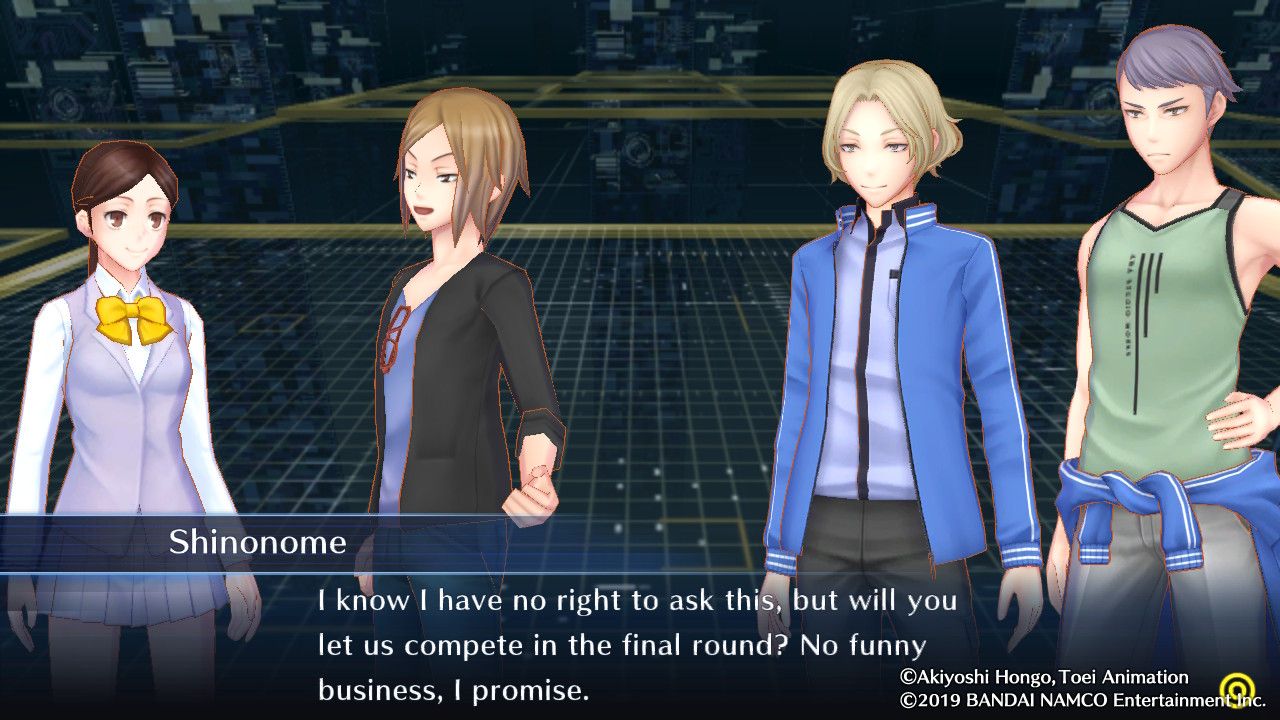 As of Chapter 10 in Hacker's Memory story. Most of Dominion Battles I encountered were parts of Side Quests. My favorite so far is the battle in the protagonist's school's Hacking Contest. The protagonist was hired by his schoolmate along with Chitose, while the opponent team hired Ryuji. The leader of Hudie takes his job seriously, and doesn't hold back. It made a great"avoid at all costs" challenge on the Dominion Battle grid!

Another favorite of mine is early on. My partner on the team was Erika and her Wormmon. Basically, in 3 vs 3 battle, she only had one Digimon who's extremely weak. I had to play that Battle as if was short on one character. My main feelings about this battle system at the start were: "fun but too long" but now I'm used to it, I think it's a great way to prevent the gameplay from going too stale. Especially since Dominion Battles are used sparsely in Digimon Hacker's Memory.

These battles take a long time though... You can't save mid-battle, so I make sure I'm prepared every time the game warns me of such a battle. (I'm happy that Digimon Hacker's Memory always gives this warning.)

Even when I'm stronger than my opponents, it takes a while to gather the required points to win. The Turn Limit in these battles is generous but doesn't allow you to make many mistakes.

Getting a "Game Over" screen against an opponent with weak Digimon is extra painful, but treating turns carelessly leads to just that. If I remember correctly, that almost happened to me in the Wormmon battle I mentioned above.

This Dominion Battles feature, just by existing in Digimon Hacker's Memory, reinforces the sense of comradery between Team Hudie members. I think that feeling is only enhanced in Side Quests, as in some of them, you can choose a partner out of the protagonist's friends to help with the Mission. It's a great contrast to the first Cybersleuth game, in which every one of the main cast is doing something by themselves. Aiba might be the professional detective, but it's Keisuke who relies on his friends more!

What Do You Think?

Dominion Battles aren't the only type of Team Battles in Hacker's Memory, but Emblem Battles types don't have new gameplay features like this one. Only going around the map, gathering emblems, and dealing with Random and Team Encounters.

I wrote and rewrote this article for months before finally publishing it today. I started after fighting my first Dominion Battle, and updated it with what I know by now. If you're interested in more of my Digimon content: Read my First Impression for Digimon Cybersleuth and Meeting "Sistermon" in Hacker's Memory also check the #GamingSnaplog tag!

For now, I leave you until the next article. Salam (peace~)