Digimon World is the first Digimon title to reach worldwide success. It turned the Digital pet series of toys into a video game with actual story and colorful characters. 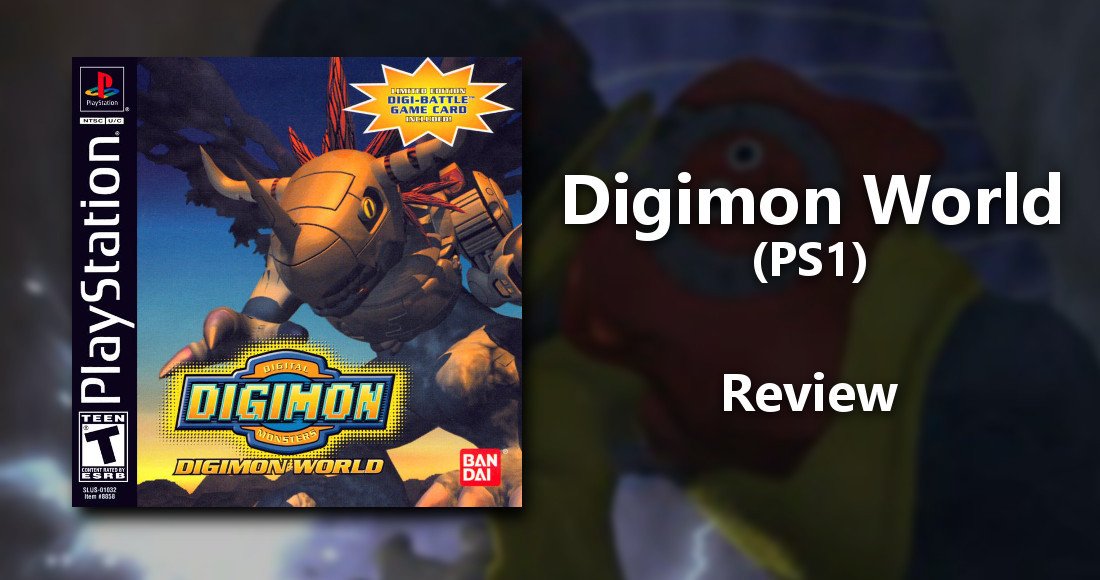 It's one of the games that had a special place in my heart. As a child I stumbled on this game not knowing anything about Digimon, I thought it was Pokemon but with different monsters. I played it a lot but I have only vague memories of that time. I was a child who don't know English yet so I didn't progress in the story. At that time, Digimon World was my first Open World experience.

I watched the game's awesome intro many times!

Digimon World follows the player character (a Digimon fan) who gets sucked into a Digimon key chain and finds himself in the Digital World. A place where Digimon live. He encounters Jijimon and is tasked by him to return the Digimon who have "lost heart" to the file city, the town in the center of the island.

Most of the island is open from the start including areas with Digimon who're impossible beat at that level. Some actions you do and Digimon you recruit open more areas with stronger enemies. 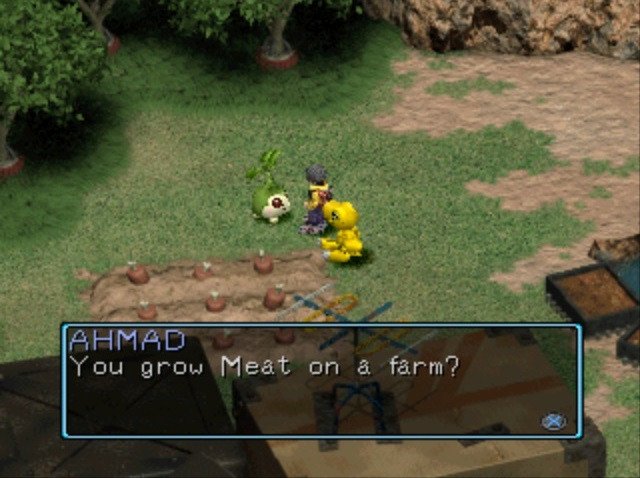 Digimon World is full of bizarre ideas like a meat farm!

The graphic of Digimon World are amazing for a Playstation game. The island landscapes have village/country-side feel. There are forests, and mountains. A tropical area. An invisible bridge. A land covered in snow and a haunted mansion. The best thing is, they all make sense next to each other. The Digimon in game feel alive and I could feel all the love put into their animations. 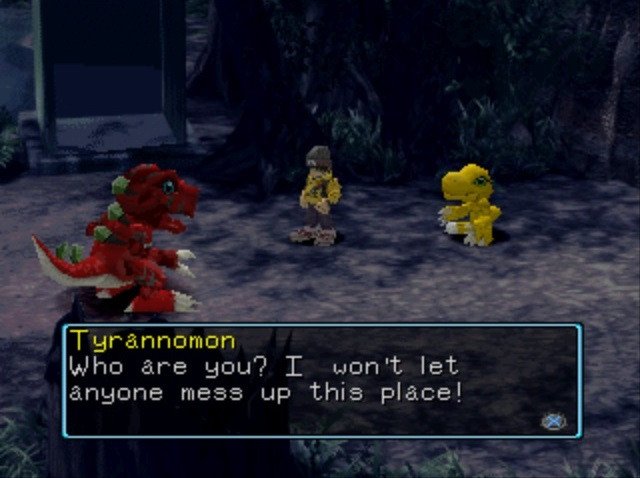 My favorite is the pre-historic themed area.

Digimon World has a interesting gameplay cycle. As you explore the island, you have to take care of your Digimon needs. More than once a day they get hungry and you have to feed. They need to sleep at night (some Digimon are Nocturnal so they sleep during the day.) The Digimon also needs to poop.

Battles progress in real time and Digimon fight on their own and you can promt them to use their finisher move when the gauge fills up and support them. While Digimon mostly make their own decisions, you can give your partner orders and you get more specific ones as you train their intellegnce.

Your real role in battle however, is to support using items. Opening the menu gives you a list of items in your bag. You can throw them at your partner to help them through the battle.

Digimon World battles give us the perfect balance taking the control out of the player without making ys feel helpless. Items and finsihers are essential to win battles and if your Dgimon isn't overpowered you'll need to use them frequently.

The Digivolution Animation is Awesome!

Digimon Digivolve once they grows older. They evolve from In-training to Rookie and from there to Chamption and Ultimate (which was the final stage when this game came out.) The digivolution depends on multiple factors like parameters (HP, MP, Atk, Def,) weight and age. Care mistakes influence which Digimon you'll get and you'll get terrible Champtions weaker than Rookie Digimon if you made too many.

When the Digimon's lifespan ends they pass away. This usually happen after few days in-game, and reaching the level Ultimate increases their life span a bit. When they do die you get a new Digimon to raise. But depending on when that happens it could be frustrating, instead of going to the next point in story you'll have to train them from the start and hopefully get a Digimon as strong or better than the previous one.

The main goal of the game is to recruit lost Digimon to the city. Recruitable Digimon are spread all over the island though only handful of which are required to finish the game's story.

Digimon World is an interesting case of an open world game. You can do anything you want, recruit Digimon out of order or explore the island with your own pace. But there's nothing to do except the main objective. Luckily, most of the Digimon offer something to the village after they join. First shop in the city.

Digimon World is full of mini games, a lot of Digimon you recruit will challenge you or ask you favors before joining. Penguinmon has the infamous Curling mini-game. Drimogmon's makes you dump the dirt as he drills the tunnel, and my favorite one is Monochromon's store management challenge, in which you run a store and have to make 3000 BITs to be accepted. The city becomes alive as you recruit more Digimon as some of them open stores or services. A restaurnt and a Clinic would be buit by Meramon and Centaurmon respectively. Birdramon opens a transport services and takes you to any place you've been to before. Greymon who joins the city after hearing about your achievemnts opens up an Arena for figthing. Various Digimon improve the city store when they join and take turns on the storefront.

Digimon World's island areas are breathtaking to see and each new area feels fresh. The soundtrack however, is a mixed bag. Many areas don't have music, opting for natural sounds instead. But the few music tracks are good. The File City at night music is so good and relaxing that I downloaded it on my phone years ago.

I won't say Digimon World is perfect, the game is riddled with bugs (few are gamebreaking, and I wrote a post about a glitch last year.) and the 3D models sometimes pass through each other resulting into a jarring scenes. These imprefections didn't take out of my enjoyment of the game and the game breaking bugs are easy to avoid if you know them beforehand.

It's a challenge to finish a %100 run of Digimon World. There are medals to collect after mastering each aspect of the game. For example, getting every Digimon requires a lot of experimentation and paitence. There are 29 different Champion level Digimon so getting all of them requires raising at least that amount of partners and you have to try next time if you make a mistake.

Digimon World isn't for everyone. Taking care of the Digimon becomes a chore after a while, and trying for a specific Digimon to play as or recruit is frustrating. However, playing the game using a guide takes a lot of fun out of the experience.

This game is hard to recommend to new people. It's a unique genre (monster simulation) and it could take a lot of time to get used to. If you're new to Digimon or not interested in the franchise I don't think I'll recommend it so much especially if you hate the reset mechanic (once a Digimon die you have to start training all over again.)

But you don't mind the flaws and interested in raising monsters then I highly recommend playing Digimon World! It's regarded by many fans as the best Digimon game and that's saying something for how old it is.

If you want to read more PS1 nostalgia check my Playstation Games of My Childhood series. I mentioned the game in the first part. For more #gaming content follow me and comment your thoughts. Comments make me actually want to write more.

First image uses the games box art taken from google. Most of the animated gifs and screenshots are taken by me. Late game screenshits are taken from Neoseeker.