Would you love to live in space or another planet?. The problem is not your cravings but can you thrive there?. Well if Humans can thrive on other planets then that's the next level of space exploration. In this movie Mark played by Matt Damon survived on Mars. I was on the edge all through the duration of this movie because of how thrilling it was. If you don't get me just imagine getting left behind in a desert after a tour, with nothing but a few rations of food. 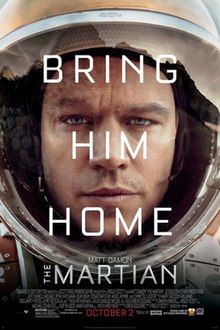 So, what tickles me about 'The Martian' is the ingenuity. I mean who could think of growing their own potatoes on Mars. I also live the fancy space suit. It looks almost the same with the real ones used by NASA but with some improvement especially in movement. I love how the scientists where able to move around on space vehicle as if they were driving in the sands of Dubai.

I think my love for space exploration and space shuttles increased after I saw this movie. It made me more interested in space, and the whole new idea that one day soon we shall be able to travel to space, like journeying in a train from London to France.
I also witnessed space X launch and the thrill that followed, although it too longer time.

My favourite scene in this movie was when Mark tried sending message to earth through a rover. The way he arranged photos showing that he was alive. Even as help was 140 million miles away, that's far, even for me that don't really do much maths. Anyways, he succeeded and got the folks back on earth cracking their brains for a possible rescue plan. They eventually resolved not to rescue him citing risk and all that.

The reason "The Martian" stands out for me among other famous space movies like star wars and star trek is the way it is realistic. Take for instance the travel from earth. The way the shuttle vibrated, and the floating norm we all know about in space. Although a little bit of sci-fi is added here and there, you still have a feeling that there's a probability this could happen. Also there is a chance that somewhere in the future someone might get stuck in Mars. Maybe in one of Elon Musk's shuttle hahaha. I am not praying for that though.

Mark (Matt Damon) for me did a great job as a scientist and also a survivor. His role in this movie left me thinking that maybe, just maybe we could grow crops on Mars. Imagine the possibilities. Wheat being shipped from Mars. I also love Rick's (Michael Peña) role in the movie how he risked it all in a doughty attempt to rescue Mark.

So, for people who want to experience a near reality to space travel this movie is highly recommended by me. For more movies on space check out other outstanding post on the CineTv Community post on favourite space movies.