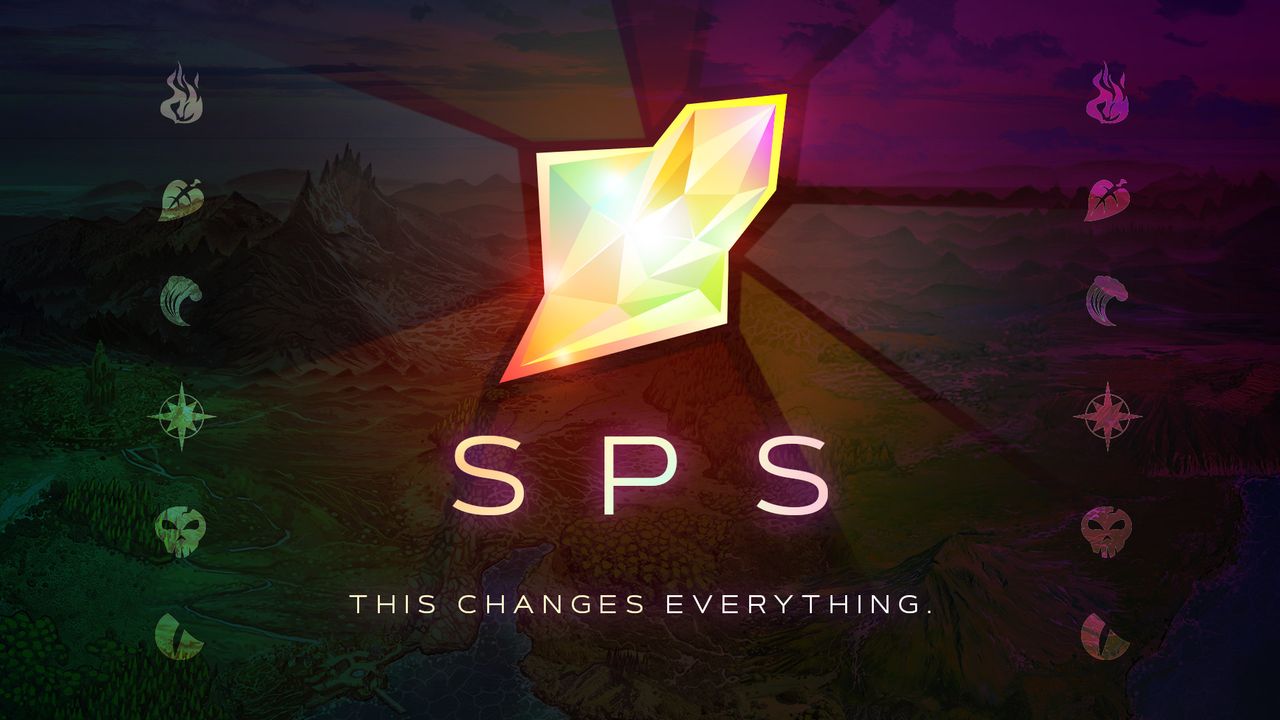 Three years ago, Splinterlands (or Steem Monsters, as it was known at that time) was launched with nothing more than a basic website, some left-over artwork, and a promise that it would turn into something more.

An unbelievable amount has changed over the past three years, but one thing that has stayed the same is the driving mission behind the entire project - to return ownership and control of in-game assets to players, and to allow players to share in the rewards and value that their time and effort spent gaming generates. In short, we want to turn the exploitative nature of the traditional digital game market on its head.

In the past three years, Splinterlands players have won over $250,000 of tournament prizes, earned over 1.7 billion DEC tokens, and sold just shy of $4 million worth of cards on the peer-to-peer market. Those are some nice numbers, but we think we can do better. With the launch of the SPS token we're entering a completely new phase of the product where we hope to take player earnings and control to the next level.

The Splinterlands team is extremely excited to share this with our amazing community, and we look forward to working together to make the next three years blow the last three out of the water.

For nearly a millennium after the Splintering, the Wizards’ Council has ruled over and governed much of the Splinterlands, wielding a mysterious power that allowed them to control and even alter nearly every aspect of the world as they desired. The source of that power has remained a heavily guarded secret...until now.

Plagued by scandals around the recent unveiling and opening of the continent of Praetoria for exploration and settlement, the Wizards’ Council has suddenly and mysteriously disbanded, providing a rare opportunity for Splintral scholars to begin unraveling their many secrets. Before the death of Gariboleus the Old, the aged Wizard left a magical inscription upon the wall of a cave hidden deep in the Praetorian wilderness that began to tell the story. This cave was discovered by Truck Vandenburg, the first pioneer of the Praetorian explorations. The secret contents of Gariboleus’ inscription were revealed to the Order of the Silver Shield, who shared them with the most powerful people in the Splinterlands for an undisclosed price.

It has now been discovered that the source of the Council's control over the Splinterlands came from massive deposits of a previously unknown type of rock spread throughout the Splinterlands. These rocks are believed to have been created in the midst of the great Splintering itself nearly one thousand years ago. When enough of these Splintershards (as they have come to be called) are combined together, they have the power to alter the very fabric that makes up the world of the Splinterlands. As more information is slowly discovered about the Splintershards, Splinterlanders who understand their secrets are scrambling to harvest as many as they can in hopes of harnessing their immense otherworldly power.

The full details of the token can be found in the official SPS token whitepaper available at: https://sps.splinterlands.com. This post will cover some of the highlights and things that we expect will be most important to our existing player base.

Additionally, Splinterlands founders @aggroed and @yabapmatt will be holding two AMAs following this announcement to discuss anything and everything about the new token and answer as many questions as possible from the player community. The AMAs will be at the following times:

We hope to see all of you there!

The Splintershards token will be set up as a Decentralized Autonomous Organization or DAO via a series of smart contracts which will be published on the Binance Smart Chain (BSC) platform.

All interactions between the Splinterlands game (which runs on the Hive blockchain) and the SPS tokens (which will run on the BSC blockchain) will be handled via an oracle system.

The oracles will be users or other entities elected by the SPS token holders that will be responsible for running software that will relay relevant information about game transactions on the Hive blockchain to the SPS token smart contracts on BSC and vice versa and will receive SPS token rewards for doing so properly.

Please note that it will not be necessary for players to have a Binance Smart Chain wallet or interact with BSC in any way in order to earn SPS tokens via the Splinterlands game and participate in game-related governance voting. Tokens earned and held in the game will be "locked" in the SPS smart contracts on BSC until/if a player chooses to transfer them to a BSC wallet address which will be handled via the oracle system.

The maximum total supply of SPS tokens is not planned to exceed 3,000,000,000 which are planned to be allocated as follows:

We will cover some of these allocations in this post, but for the full details please see the Token Distribution section of the SPS Token Whitepaper.

400M SPS tokens, or 13.33% of the total token supply, will be airdropped to players based upon the amount and type of Splinterlands assets held in their accounts. Rather than have a specific airdrop date/time with a snapshot as is common, SPS tokens will be airdropped to asset holders on a daily basis over a 1-year period. The goal is to encourage players to accumulate and hold Splinterlands assets over a longer period rather than having a big rush up until the snapshot followed by a dump shortly afterwards.

The first day of the airdrop is expected to start around July, 2021, and more details about how it works, exact dates/times, and how players can view and claim their airdrop rewards will be released before that time.

As an example, if there are a total of 5 billion airdrop points in total across all assets in the game on a particular day, then players will receive 0.00022 SPS tokens (1.1M / 5B) for each airdrop point worth of assets they hold in their account at the time of the snapshot that day.

The base asset for determining airdrop points will be Splinterlands cards. Cards will be valued by their Collection Power, which is equivalent to the DEC burn value of the card, and each point of collection power will be worth one airdrop point.

For more details about the airdrop points values of the various Splinterlands assets, please see the Airdrop section of the SPS Token Whitepaper.

The initial planned allocation of the 37.5M monthly reward pool tokens are listed in the table below:

Staked SPS tokens will not earn any new SPS tokens from the reward pools just for simply being staked, as is the case in many other projects. Instead, SPS tokens must be staked on a particular player in order to earn rewards based on that player's performance.

Both the Ranked Battles pool and the SPS Staking Rewards pool will work similarly to how the DEC rewards for ranked battles work currently. After every ranked battle, a number of "reward shares" will be calculated for the winner based on the winner's ranked ladder rating, their Energy Capture Rate (ECR), and any modifiers such as the use of gold cards, win streak, and guild or other bonuses.

The SPS earned from the Ranked Battles reward pool will go to the player who won the battle, and the SPS from the SPS Staking Rewards pool will be divided among all of the accounts that staked SPS on the winning player based on their percentage of the total SPS staked on that player.

Therefore, it would not make sense for everyone to stake their SPS on the top-rated player because after a certain point it will provide better returns to stake SPS on a lower-rated player who does not have as much SPS already staked on them.

Please refer to the Ranked Battles section of the SPS Token Whitepaper for more details as well as some formulas and example calculations.

But there is much more to the token than just governance. Once Splintershards are released, nearly every offer and promotion offered by Splinterlands going forward will either require certain amounts of SPS tokens to be staked in order to participate, or provide significant bonuses to players who have SPS tokens staked.

Additionally, promotions such as airdrops may provide increased chances of receiving airdropped cards and/or gold foil versions of the card based on the number of SPS tokens the player has staked in their account. Please note that this will not apply to any airdrops that have been previously announced such as the remaining ones for the Untamed and AZMARE Dice pack purchases.

Splinterlands intends to run offers and promotions with staked SPS requirements on a regular basis in order to encourage players to hold and stake SPS tokens as much as possible.

Finally, Splinterlands also intends to add SPS staking as an entry requirement for certain tournaments. This means that in addition to providing access to offers, promotions, and other bonuses, staking SPS tokens will also allow players to compete for larger tournament prize pools.

It is expected that the Binance Smart Chain contracts for the DAO and oracle systems will take a considerable amount of time to build and adequately test, including third-party audits, so rather than waiting for that to be completed the Splinterlands team is planning to release the token and begin the airdrop in-game while that is being developed. The rest of the in-game mechanics around the SPS tokens are also planned to be developed in parallel with the BSC smart contracts and released in phases as they are completed.

A very high-level, rough timeline for the planned releases of each of the features is below:

Splinterlands is working on bringing on additional engineers and other resources for the development of the SPS token ecosystem so that it can be built in parallel with the land expansion development; however, it is possible that some portions of the land expansion as well as other items on the roadmap may be delayed either directly or indirectly as a result.

Ultimately it was decided that releasing the SPS token, with everything it brings, was important enough to do in parallel with, and potentially causing some delays for the other features being developed, rather than waiting until afterwards.

One important aspect that sets the SPS token announcement apart from other announcements in the past is the inclusion of a number of influential organizations and individuals in the blockchain and cryptocurrency space who will be participating in the private token sale and will be coming on board as partners and advisors to help ensure the project's success.

We will be announcing many more partnerships over the coming weeks as they are finalized, but to start it off we are excited to announce our partnerships with Blockchain Founders Fund and MarketAcross!

Blockchain Founders Fund (BFF) invests in and venture builds top-tier startups. They are a Limited Partner on Loyal VC and Draper Goren Holm. They have over 50 high-potential tech startups in their portfolio. BFF consults organizations on emerging technologies such as INSEAD and the United Nations

MarketAcross is one of the world's leading blockchain PR and marketing firms and we are extremely excited for them to be taking the lead on the marketing and promotional efforts for the SPS token project.