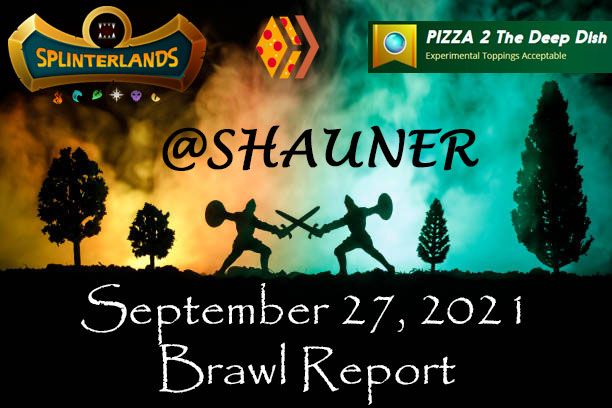 This is my fifth #BrawlReport and my third brawl in the @hive.pizza PIZZA 2 The Deep Dish guild.

I entered Fray #3 for this brawl, which is limited to only level 1 cards, but only allows Untamed edition to be used for battle.

I faced 8 opponents and my record was 4W-3L-1D. Unfortunately, due to server issues when this brawl began, I ended up with two "you fled" battles at the very beginning. It's too bad, because I could have possibly won up to 6 battles had that not happened.

I placed second in our guild with 4 total wins. Congratulations to @seriousacorn223 for taking the top spot in this brawl with 5 wins! 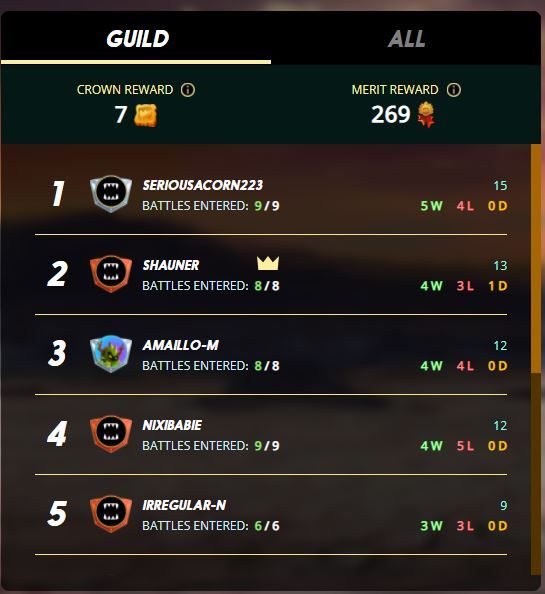 Our guild finished in 7th place this time, with a total of 31 wins. Unfortunately, we had one player who failed to enter their battles and I believe they had at least seven opponents. Those battles could have pushed us up into the top 3. 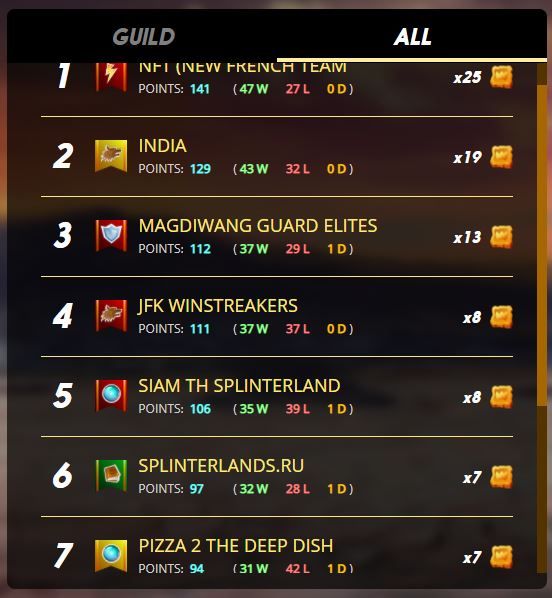 You Fled - due to server issues.

You Fled - due to server issues.

Equal Opportunity: All monsters have the Opportunity ability.
Melee Mayhem: Melee attack monsters can attack from any position.

The combination of Equal Opportunity and Melee Mayhem means that all melee attack monsters are going to attack the rear monster of the opponent. We were also limited to only using life or death splinters which significantly limited my options.

Both my opponent and I opted for a +1 health summoner and the Shieldbearer in the tank position. We ended up with very similar monsters in our lineup, adding +2 shields too.

My opponent only had 4 attack points per round, whereas I had 5 and this led to me making faster progress in eliminating their tank and ultimately winning the battle.

Equal Opportunity: All monsters have the Opportunity ability.
Up Close & Personal: Only monsters with melee attack may be used in battles.

I used my Llama summoner for this battle in the hopes that the Last Stand ability would make my Unicorn Mustang tank able to take out my opponent quickly. However, my opponent had a +1 shield summoner and used a Living Lava tank which reduces melee damage.

My Last Stand powered Unicorn Mustang was able to do exactly as I'd hoped and overpower my opponents defenses leading to victory.

Rise of the Commons: Only common and rare monsters may be used in battles.

I was unable to unleash Kron to pair with my Llama for this battle because of being limited to common and rare monsters only. I once again depended on the Last Stand ability from Llama to boost the power of the Unicorn in the last position to hopefully clear out any remaining opponents.

Unfortunately, my opponent's summoner was refilling the health of their tank each round while they pecked away at my last monster with sneak attacks. This wore me down too quickly and I ended up with a loss here.

Noxious Fumes: All monsters start the battle poisoned.
Reverse Speed: Monsters with the lowest speed attack first and have the highest chance of evading attacks.

This battle was limited to the Water, Life, and Death splinters. I decided to go with Life and setup a tank that I'd hoped would outlast the effect of the poison each round. I backed up my tank with Luminous Eagle which has a reach ability to hopefully continue damaging my opponent to let the poison take them down.

After the first round, my opponents back monster was eliminated by poison, but the shields on their tank continued to protect it from my melee attacks. Thankfully, my tank also had shields to protect from those hits, but it wasn't enough when my monster missed two attacks that cost me the win here. We ended up tied because both of our final monsters died with the final round of poison.

Earthquake: Non-flying monsters take 2 melee damage at the end of each round.
Target Practice: All ranged and magic attack monsters have the Snipe ability.

I finally got to use my Llama/Kron the Undying combo for this battle. I rented both of them leading up to this brawl and was hoping to boost my performance as a result. However, I found that most of the battles had restrictions that didn't allow me to use this combination of monsters.

The earthquake effect on this battle means a 2-damage hit to every non-flying monster each round. Kron has the healing ability which will offset the earthquake damage each round and he successfully outlasted my opponents.

Holy Protection: All monsters have the divine shield ability.
Equalizer: The initial health of all monsters is equal to that of the monster on either team with the highest base health.

I decided to deploy the Llama/Kron combo for this battle again and my opponent came prepared with a magic-suppressing Unicorn tank that held me back in the beginning. Once I was able to knock out my opponents melee attackers and left them with just range, Kron was able to make quick work of finishing them off. 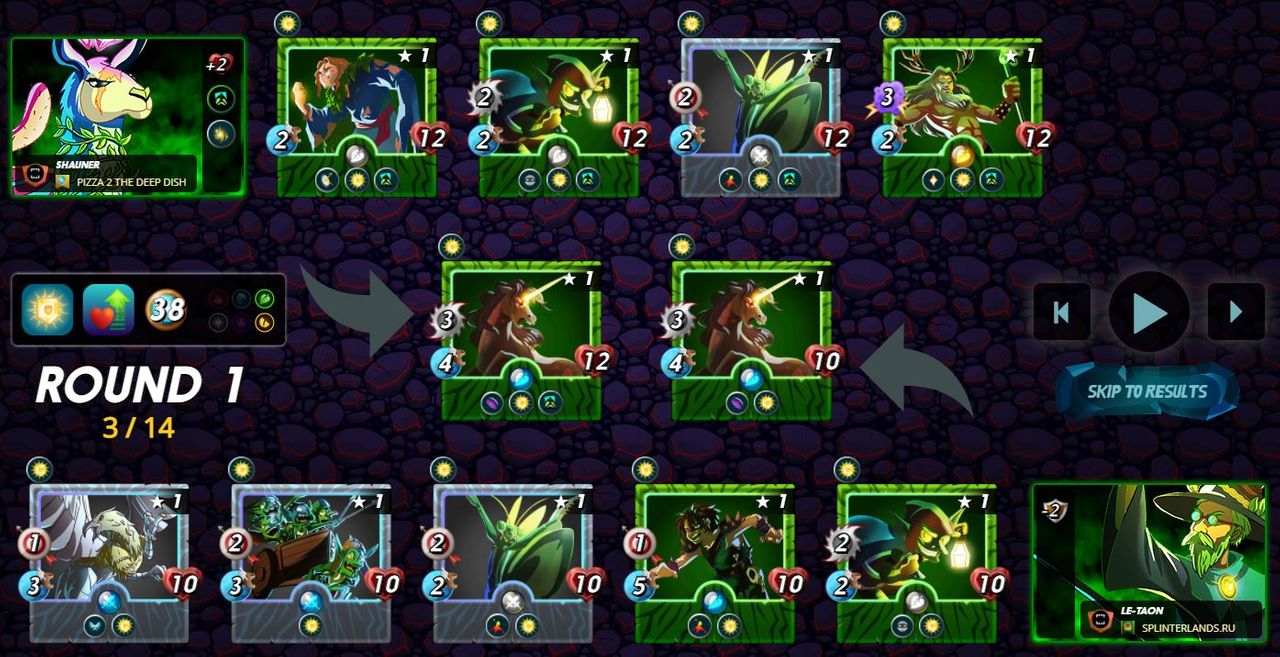 Considering the first two battles I lost because of server issues, I feel pretty good about this brawl. This was also the first time I joined an Untamed-only fray, but I also made sure to rent a few Untamed cards before entering my battles. My only lost battle restricted cards to only common and rare monsters and that likely contributed to my performance.

We each received 269 merits for this brawl and are still working on upgrading our guild store so that we can redeem the merits for gladiator cases. From what I've seen in our PIZZA 1 The Stuffed Crust guild, those gladiator cards are pretty useful!

Looking ahead to the next brawl, I am in another Untamed-only fray, but with higher card limits. I expect this means my rental budget will increase substantially for the next brawl that starts in a couple days.

@kennysgaminglife has spearheaded the #BrawlReport project as a way to get PIZZA guild members more engaged in the Splinterlands community. Here's what he had to say:

As a reminder! DO NOT use @reward.app when writing your @Splinterlands content. They are not forwarding the SPT rewards to authors as detailed by @kennyskitchen in his recent post. This unfortunate issue cost me over 18,000 SPT I wasn't awarded on a single post.