Share Your Battle, Weekly Challenge, Silent Ninja attacks in the Back! Another Death splinter for the weekly challenge, now with Death which is a great counter splinter, you cannot say that about the other splinters, if you can get the cards right, it knocks out every advantage that the other splinters have, such as what happened with this weeks battle!

The Silent Sha-Vi Ninjas the Back: 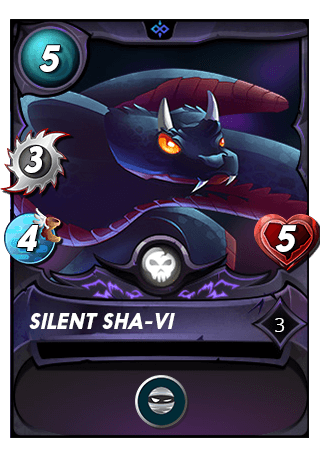 The Silent Sha-Vi is a mainstay of many of my Death Splinter fights, the quickness at 4 speed and then 3 damage is very nice, add in the 5 health and it makes it a good deal at 5 mana cost, but even more so the sneak attack, is a great thing!

The ruleset on this one was low, with only 24 mana
Up Close & Personal: Only Monsters with Melee attack may be used in battles.
Everyone is sneaky, so you need to protect your back line on this one
Here is the quick link to the battle: (Link) however, I will break it down, then you might want to watch again.

First up, the Summoner: 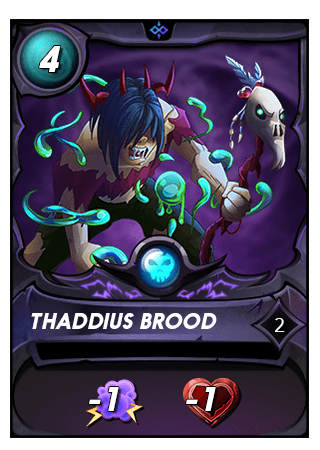 Brood is a great counter summoner, taking away 1 health and 1 magic, helps a lot right there. I also chose Thaddius because it is a death challenge, and it is the only Death summoner I have over level 1. I also him because of the minus to health, that helps to take down enemy monsters a little quicker.

The front line was the Cursed Windeku: As is standard in most death lineups nowadays, the Cursed Windeku up front, high health along with thorns, it makes it painful for many people trying to get through, very important when only melee can be used. This is mostly just a place filler between the tank and the disintegrator, also to absorb an opportunity attack.

Next up, the Disintegrator: When I use Death I usually use an alt tank, mostly because the Windeku has a tendency to die quickly, so I put in the Disintegrator as this backup tank, but it is the Demoralize ability that I am really after, it reduces the melee attack of all enemy monsters, which will allow my Silent Sha-Vi and the Windeku to do more damage with attacking and then thorns.

Next is the Silent Sha-Vi, I get that nice sneak attack damage, 4 speed, 3 damage, it takes down enemies in the back row pretty quickly. The Carrion Shade was an addition to the back line to provide a little extra hit points and damage buff for the Silent Sha-Vi, the flying hopefully can make some attacks miss, but it is mostly about keeping the Silent Sha-Vi alive a little longer to do more damage.

Did my strategy work, yes it did work out this time. The decrease in health was nice, the slimeball died quickly, the Carrion shade just took damage, no dodging, which was sad, but overall, I took them down quickly with the Silent Sha-Vi staying alive to wreak havoc on the other monsters!

I love the Silent Sha-Vi card, as stated earlier it is in many of my death lineups, the amount of damage it does, especially to the back line, works very well against most builds. Combine the counters in the Death Splinter, and it only gets better. I do recommend the card for any deck, also really good if you can get it in gold, I’m not there yet, but hoping to pull one here soon!

Overall, this was a really good battle for me, and when you are watching a battle, you always need some Pizza! If you are looking for a great area of Positivity along with a great community, com join the Pizza Family!

You can find them here: Awesome Pizza Discord

I do want to say thank you for reading all of this and have a wonderful rest of the week!
Dr. Kqaos


If you are confused by this post, start here! If you use my referral link I will send you 100 DEC to get started!
Rising Star
Great music NFT and a way to support up and coming musicians!
Sorare
Still learning this one, but it is a football (American Soccer), easy to set up and go!
Star Citizen Referral code: STAR-LRKQ-D6NK
Space game, still in alpha development, playable, very immersive, sign up with the referral code it will give you money in the game along with both of us receiving a free ship!
Unmineable
A great way to get into Crypto mining, easy to set up, code gets you a 0.25% fee discount, uses the graphics card while you are not using your computer, or you can mine with just your CPU.

Photos come from PowerPoints stock image, Bitmoji with Splinterlands logo on top of it, or my own screen shots of Splinterlands, along with the image that they provided for the Weekly Challenge.