It is with a heavy heart that I write this blog today. A blog about that my dogs and I, are giving up using the dogs their barking account. This is about the @shepherd-stories account. 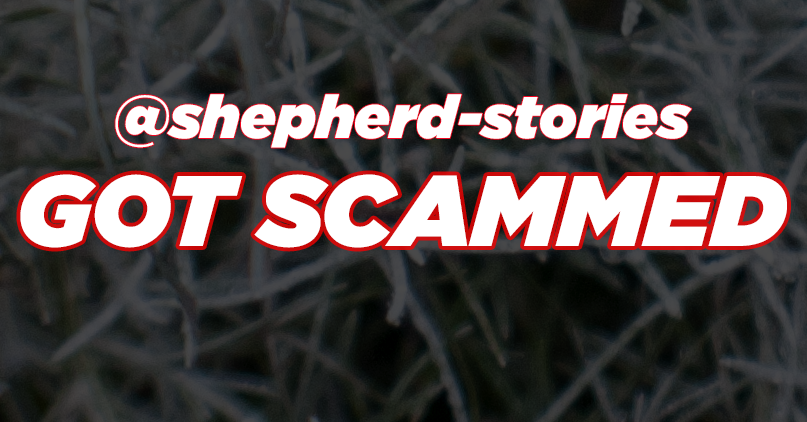 Last Christmas Eve, I logged into Hive-Engine, a habit I repeat every day. And it's never that exciting to see the balance of shepherd stories, because I pretty much didn't use the account anymore. Not because the dogs had nothing to say, nor because I don't want to keep it that way anymore. But because I'm too busy with other commitments and even having trouble keeping up with my own blog, in addition to the weekly commitments for @lbi-token and @brofund. Of course, I also have an offline life that has to go on, I still have hobbies that I want to practice ... and yes, my partner is still there. No drama of course. I had setup autovote for the shepherd stories and they followed my main account. You would think that this is also the way it should be, wouldn't you? Dogs should follow their owner. They do and did so well, and I had hope that in the future I could free up more time to keep up with this account again. Because it is nice to write differently, from the point of view of the dogs.

So last Christmas Eve I saw that there were trades made in Hive-Engine, which was strange because I certainly hadn't made those trades! A powerdown was also started from the account itself, several unstakes were enabled in Hive-Engine, in short, someone had been preparing to empty everything.

I did what I could on hive... change the keys, and cancel the powerdown, , cancel the unstakes, (which I turned on later again because I decided to not use the shepherd-stories account anymore), and pass it on to @hivewatchers. And thought it was over with this.

From the shepherd-stories account I gave the dogs the chance to bark this story. And there we thought it was done. Until I realized a few days later that I had created this account in the old days, on that other platform! I went to look, and noticed that I couldn't log in with my keys that belonged to that account.

I no longer have access and can't do anything. An account recovery request there only works if your recovery account was set up on steem, and it wasn't. I had it on my hetty-rowan account. But a quick look into the steemworld taught me that there was even a change for recovery account pending. That was set to “ahimadri”. A withdrawal route was also set up to “ahimadri”.

And the hacker started posting from that account! The blog I had written here on hive from my shepherd-stories account has been copied and posted. Another dog has been used for the photo, (I bet that is stolen too, because when I do a reversed image search I end up with a gofund!

But every word from my original blog has been copied. Except for one thing. The ahimadri account, which I also mentioned in that blog, has been omitted!

And if that wasn't bad enough...I also found a blog that was NOT written by me. Shamelessly, the 'hacker' has a blog written by @nguyenthaonguyen copied and posted on the shepherd-stories account on that other platform using the original photos.

They are plagiarizing not only me

I felt so bad when I discovered that. First, because I can't get into the shepherd-stories account anymore, so I can't do anything with that. Second, because a blog has been plagiarized, both from myself and from someone else. But also because the shepherd-stories account still states that the stories are written by hetty-rowan. Therefore, my name would be associated with plagiarism by people who don't know I've lost access to that account! That bothers me… I've worked hard for four years to build a good reputation, and now a scammer comes along and would destroy that. I really hate to see that happen!

Shamelessly, all my words copied to the other platform

When I went to check Ahimadri on that other platform I almost fell off my chair in surprise. The photography End Of Year Contest blog I wrote 4 days ago for the Photography Lovers contest Community held by @derangedvisions, is shamelessly copied by ahimadri on that other platform. The links that indicate the images even point to my hive blog. And really believe me, I have nothing to do with that account!

What's the point of this?

I feel angry and shocked at the same time. What's the point of this? What's the point of copying someone else's words literally? To pretend to be someone else? But what bothers me the most is that there may be people who think I'm behind this. While that is absolutely not the case. I only have my words, I no longer use that other platform. I have found my home in the Hive community. Not there! Which also immediately explains why I unfortunately only got it so late seen that there was a mess in my shepherd stories account.

Yes I was negligent, unfortunately I did not change my keys from the shepherd-stories account after the hardfork of hive. It is what it is, unfortunately! Luckily on Hive I was able to change my keys in time before more damage was done. The activity started 18 hours before I logged in.

This will at least make shepherd-stories' account on Hive safe again, but... personally it makes me feel bad to know that the account on that other platform, which I no longer have control over, is copying blogs from Hive to there.

I distance myself from this!

I have never plagiarized a photo or text and never will. Because I know all too well how annoying this is. I have words enough of my own to come up with original content, and besides that, I love to write up original content. All I have are my words! But now, I have to take into account that my words are apparently important enough to be copied. Ahimadri on that other platform has proven that once again.

I would like to make it clear that I ONLY ACTIVELY BLOG ON HIVE, and nowhere else.

And that I feel like I can't blog anymore with shepherd-stories because I really don't want to be associated with scammers, and plagiarism in any way.

Get a damned life

That they look for a damn life of their own, and take the trouble to earn their money in an honest way instead of screwing up other people who do work to earn some money! You don't get me angry easily, but once I get angry, I search until I can eliminate the problem. And now I am angry! I don't know how to do it yet. But I'm not going to stand by helplessly as another person impersonates me by posting blogs from a stolen account. If anyone has any tips on how to fix this I'd be very grateful.

NOT on that other platform.**

The main question is how they got my keys. I've actually pretty much racked my brain over the past few days trying to figure that out. And I still don't know! I have searched all old email addresses, have searched my mail accounts but have not found anything that involves keys, and never entered them anywhere on a website because I always work with keychain. I always used keychain for that other platform as well as I use keychain for Hive.

By checking my email address via a link I received from @guiltyparties via discord DM, I saw that my email was compromised in 3 breaches. This was in a 500px breach, perhaps well known to photographers, another breach was animoto, and the third was Canva! Now, I know that several people here use Canva for their blogs. My mail passwords were changed after that time, but still I changed everything again! Just to be sure. I also have setup my mail with other security that I won't explain here. Because I know for 99% sure that this blog will also appear on that other platform, and the ones who stole my account don't have to know how I secured my email. They have more than enough already.

Anyway, it leaves a bitter aftertaste at the end of 2021, a year that was otherwise just good if you think away the noise of Corona and the associated measures.

Unfortunately, the ahimadri account on the other platform also plagiarises hive blogs. I wish I could prevent this, but unfortunately I can't because I have nothing to do with this account.