It's not that I'm used to great luxury, I used to sleep in barns and various budgets during my service and training, but I have to admit that the stale straw in the barn, if it can be called a barn at all, gave me a pretty bad welcome. The planks that used to be there and formed the partition walls were taken out and the enemy wind did not give me peace. Grumpy and sleepless, I returned to the tavern, drank tea and ate some strange breakfast mixture, and after that I wanted to ride through the village and talk to the locals. The innkeeper was in the same grumpy mood as last night, maybe he didn't sleep well either, if he slept at all considering how hostile he was to me. He didn't speak while I had breakfast, except to take my money out of my bag again.

My day was spent riding from one farm to another, wandering the fields and meadows so I could talk to the farmers. It seems to me that they accepted the stranger a little happier, but my questions from the fugitive killer very quickly returned them to the same mood that reigned in the tavern. The innkeeper was right, I could not see many young men working in the fields, so my intention and task to recruit them into the Imperial Army seemed to be in vain. All in all, I did not gather any useful information and I returned to the inn hoping that that grumpy from the innkeeper would find at least a little will to talk to me about the fugitive. It seemed to me that he still had some knowledge, the only question is what is the price to speak.

As I took care of the horse, I thought about what awaits me when I return to Central if no segment of my task is completed. Of course, I am not the only agent on duty at this moment, but I was the only one sent to a place where none of the Imperial officials had been for years.
In the tavern, all the tables were empty, which is to be expected, considering that this is an agricultural area and that everyone is in the fields. The innkeeper was in his place behind the bar while an elderly woman was cleaning the floor. She looked down when I walked in and soon got lost in the kitchen.

"Innkeeper, why aren't there young people here ... Something strange is happening here" - I decided to be direct with my questions, I even thought about using force at one point if he refuses to speak again. It was a great stretch of my orders, but I think I could do it if necessary.

‘‘ Because everyone left. Far away for better lives, and the few who found it difficult to separate from their homes are now in the woods. It's hunting season, so they won't be back for a few more weeks. Why did the Empire suddenly feel the need to send someone here to recruit soldiers, huh? As far as I remember the old maps, the Empire stretches over two continents and so far has never had a problem with the size of its army. " He said less suspiciously, and quite curiously.

"I'm afraid I don't have that information, I'm just a soldier listening to orders. But what I can tell you is that the Empire no longer has such a large army or such a large territory as before. Various torments have befallen us in previous years. Where is hunting at this time, in which forests? ”I asked the questions slowly, tactfully, hoping to get him to talk about the fugitive.

"It is hunted in the Northern Forest, it is deer season. So the Empire is giving up, it's no surprise to me. The rulers have been playing with powers that are not intended for them for too long. "

The enigmatic sentence deepened my curiosity. What could an innkeeper know about the powers that rulers used to play, hmmm? Interesting. It seems that there may be more here than I initially thought.

‘‘ And the fugitive? Do you remember today more than yesterday? '' I asked and impatience was clearly heard in my voice.

‘‘ Maybe I know something, maybe someone went this way And maybe I know where he went. How much is Empire willing to pay for it? ”

And then I knew, deep down, that this was not going to be so easy and that this man knew much, much more than he seemed to. 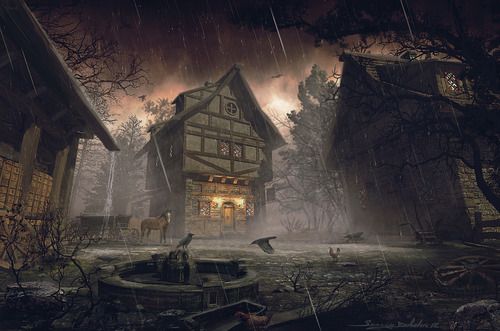