The Ink Well Fiction Prompt #8 - All the way to tomorrow 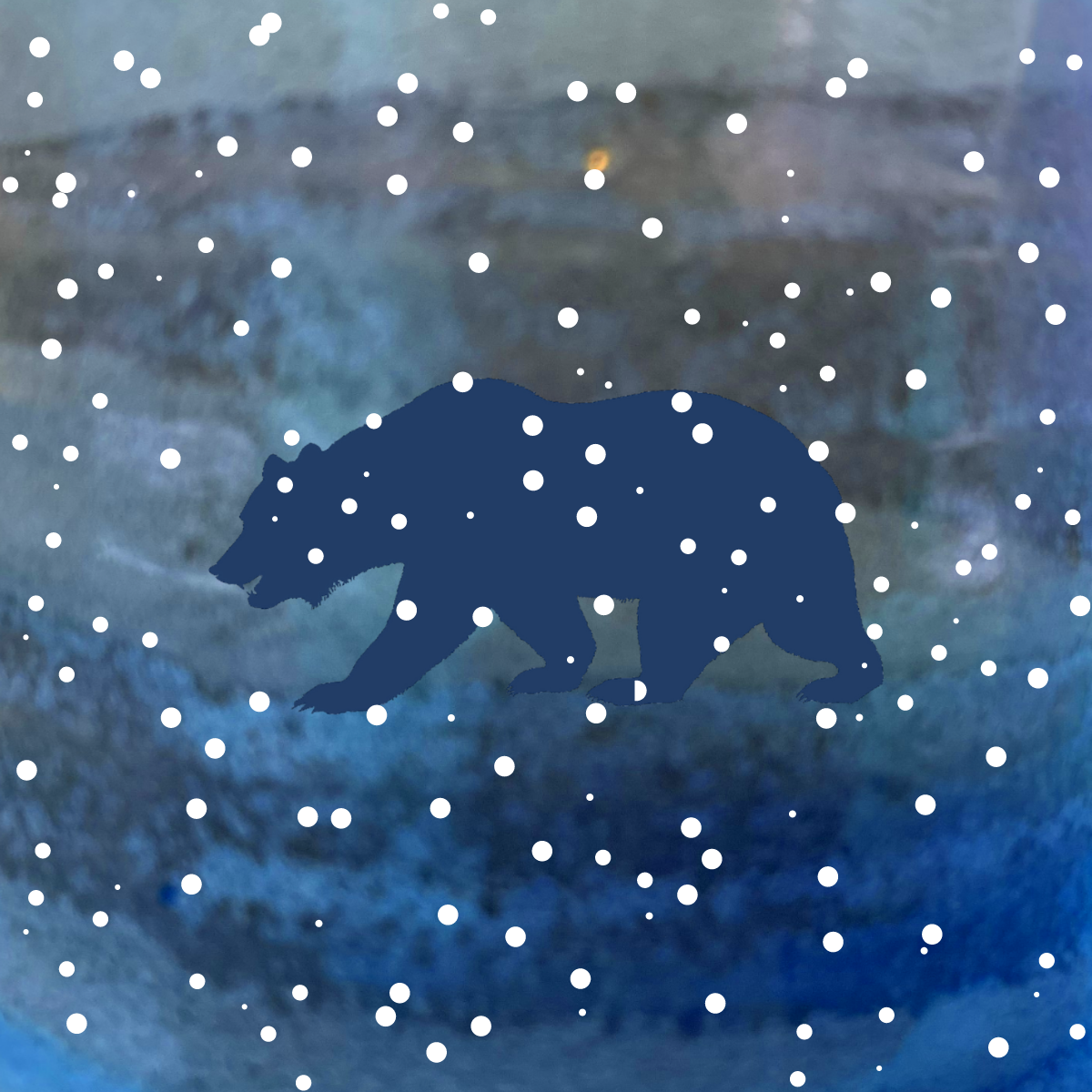 How can I be so cold, Myra mused as her awareness and consciousness arm-wrestled, Did dad forget to bank the fire again?

She went to open her eyes only to find that her lashes were frozen shut. "What the..." her voice trailed off as the frigid air crashed into her throat like a tsunami of ice fairies at a climate change protest.

Cupping her hands over her face, she exhaled until she felt the crystalline mortar that held her eyes hostage to the visual world melt away.

She was lying on top of a block of glacial blue ice.

Myra bolted upright, only to slip as her feet hit the ice-covered surface next to her cube resting place.

"Mom!" she shouted as she ran her rapidly numbing hand through her long auburn hair.

"You really should quit yelling child, it's most unbecoming." a cultured voice behind her stated.

Myra swung around and gasped, “You’re a, you’re a!”

The great slate blue bear before her tilted its head slightly and replied, “Pressed for time is what I am, and if we are going to make the meeting on time you better get a move on.”

The cold forgotten, Myra was frozen in place. She was in some sort of cursed igloo with a bear, and a blue talking bear at that.

“I must be dreaming, right?” Myra spoke as she stared into the bear’s amber eyes.

“What you are is most probably hypothermic, and we don’t have time for such nonsense,” the massive bear delivered this statement in the most matter-of-fact tone as it swirled towards a wooden chest on the edge of the ice room.

“Well, get over here,” the creature huffed, “This trunk is for The Arbiter.”

“What?” Myra squeaked, the bear’s voice, while refined, also contained a bit of growl that she felt in her spine.

“Lovely,” the bear growled, “Worst dispute in a hundred years and they send us a squeaking mouse.”

Before Myra could draw another frigid breath the bear slapped the trunk with its massive paw and roared, “You are the Arbiter, you are also a fragile little naked skinned weakling, get over here and wrap that that fur-free pelt of yours up before you freeze to death!”

Something warm began to glow in Myra and she snapped back, “Well, I don’t know what the heck an Arbiter is, but there’s no need to be so dang rude!”

“Ah, signs of life, that’s more like it,” the bear replied as it used a long black claw to flick open the clasp on the trunk.”

Myra, having decided that this was all probably a bad dream anyway, strolled up to the trunk. Inside was a deep blue hooded fur cloak, a pair of blue fur gloves, and a matching pair of boots. There was also a blue leather ledger.

“You know, there are other colors out there.” She grunted as she shrugged on the cloak.

“Blue is the beginning, Blue until all ends,” the bear responded in a mechanical tone.

Myra jerked her head towards the bear as she slid on one of the gloves. The fur was the softest she had ever felt, and she marveled at how detailed her dream was.

“What’s your name?" she asked as she stared at one of the bear’s protruding canines. It was bigger than her dad’s index finger.

“Oh,” the bear replied, “How dreadfully rude of me, my name is Kolar.”

“Nice to meet you, Kolar, my name is Myra,” Myra replied. She was going to get the most out of this crazy dream.

“It’s a pleasure to make your acquaintance Arbiter, but could you please hurry it up a bit, they’re waiting,” Kolar replied, impatience coloring her amber eyes.

Myra reached down and grabbed the ledger. It was made of the most unusual leather and she felt a strange urge to plop down and pour through its contents. Kolar had other ideas,

The massive bear knelt down beside Myra and said, “Hop on.”

“Dang! This dream just keeps getting better and better!” Myra exclaimed as she tucked the ledger into a handy pocket she had just located inside the cloak, grasped a handful of gray-blue fur, and hopped up onto Kolar’s back. Before she had even found her seat the great creature took off out of the doorway and into the frozen waste that lay beyond.

“Where are we going?” Myra shouted into the frigid wind that enveloped her as they pounded across the snow and ice, her inquiry swallowed by the frosted roar. Myra clutched Kolar’s dense fur and flattened herself against the bear. The tips of Kolar’s fur lightened to a blue so pale that it was almost as white as the snow whirling around them.

Then she was flying.

Above the roaring of the relentless storm, a crash resounded, and Myra gasped as she flew off of Kolar’s back and into the swirling snow, only to smack into the ground moments later.

“Now, with a new and improved pain feature,” she spat as she rolled to a stop on her back. “This dream is getting a little too real for me,” she mused and sat up.

To her right, a battle raged within the Arctic tempest that they were engulfed in. Myra’s mouth popped open at the sight, for now, there were two bears, Kolar and one the color of a spruce tree in the twilight.

“Your time is over, Monotone,” the giant green-colored creature growled, its massive ruff standing on end. Myra glimpsed a golden yellow ring of fur around the new bear’s neck, even in the blinding snow it shined like a jewel of a royal commission.

“Interloper!” Kolar roared, “How dare you interfere in Blue business!” The blue bear rose on her hind legs and slapped the opposing bear so hard that Myra cried out.

Suddenly, the wind left her lungs. Myra’s scream was swallowed by the wind as she flew backward.

“Hush kid, no harm will come to you by my claw,” replied yet another bear.

Before Myra could blink, she found herself seated upon a blanket of mottled green and blue fur. It was as if someone had crafted a pelt of emeralds and sapphires into a tapestry of visually pleasing awe.

“This dream is getting out of hand,” Myra croaked as she grasped two handfuls of the swirled fur.

“Easy with the grip kid, that hair’s attached you know,” the bear grunted.

“I didn’t ask to be snatched!” Myra barked in return, “Where are you taking me?”

“To end this nonsense once and for all, kid,” the bear replied, “You are going to lead the revolution.”

And as somewhat of the time, the image in this post was made by the author on Canva out of one of her own pictures taken on the her iPhone and a graphic from Pixabay.
The Ink Wellfictionwritinginkwellprompttheinkwellstorytelling
generikat72
via hiveblog
$ 31.97
594
H2
H3
H4
3 columns
2 columns
1 column
20 Comments