Scalping is traditionally defines as :

a trading style that specializes in profiting off of small price changes. This generally occurs after a trade is executed and becomes profitable. Scalping requires a trader to have a strict exit strategy because one large loss could eliminate the many small gains the trader worked to obtain.

To say it in simpler words, scalping involves a trader to identify a repetitive price range and buy the lows and sell the highs.

Sounds quite straightforward, but as a beginner trader, you'll see this isn't the easiest to execute from the get go. First step is to choose your poison wisely and then observe it for days and weeks and months if necessary to understand the pattern your coin of choice follows. This is absolutely essential. I can not stress this enough, if you want to scalp successfully, you HAVE to identify and understand the pattern, and you have to trust the pattern no matter what.

If you're a day trader, you can of course scalp with something with a very high volume like Ethereum. But that requires you to have enough time to stay on top of the market constantly, on a daily basis. But if you're unable to do that, like myself, I find something more sparsely distributed like HIVE to be very suitable. Why? See the repeated high and low spikes, you'll hardly see them occurring with high volumes, let alone getting these on a regular basis. But with HIVE, I relied entirely on taking advantage of these spikes to make $25-40 per trade.

So what really worked for me?

Okay, this last point needs a bit of explanation.

Say for example, you are scalping with 2000 HIVE. So every 2 cent profit margin gives you an absolute profit of $40. Sure you can divert this entire profit to open a position in another trade. And that's what I did, mostly. But for a few of the trades, I didn't move the profit into another trade. Instead I put all of it back into buying HIVE. Question must be asked, why is this important.

First off, I'm a HIVE fanatic regardless of all the sarcasm we spread on discord. Secondly, you don't kill the golden goose!

A bit too cryptic?

Let's say you wanted to buy hive when it was 12 cents...13 cents..15 cents. But now the price has shot up to nearly 30 cents. and it seems a bit out of reach for you. You can still use scalping to gather more hive.

You have successfully done a cycle of scalping and you have a nice amount of USDT sitting in you balance. As I said above, you could use this USDT to get into another trade. Or, instead of buying back only your original position...you put the entire amount to buy whatever HIVE it adds up to which will be higher than your original position.

Essentially you're pulling extra hive out of nowhere into your account.

So being a HIVE fanatic, you could ideally still be accumulating "cheap" hive at 70 cents if you can master the art of scalping. And that's what we fanatics want, don't we! MORE HIVE!

Let's address the golden goose theory. This is very interesting, and I will back this part up with real trade example. (The rest of my scalping real trades, I already discussed in an earlier post, so didn't wanna sound repetitive.)

On 15th february, late afternoon I started creating the draft for my contest post...basically me brainstorming and typing down points...specific words I wanna use (for example "choose your poison wisely" is something I really wanted to incorporate at some point). I had most of the draft ready, I'd say 70% (no pun towards my 70% gut feeling score). The Golden Goose Theory was still not in the draft.

It was time for Magrib, so I finished my prayer and went for a cup of tea. My sell order was at 28 cents and HIVE decided to do this in the meantime. 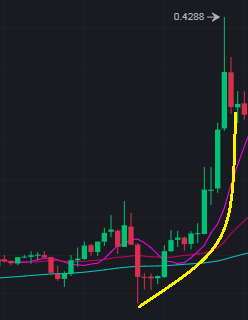 Needless to say, I panicked as I remember how I sold almost 90% of my liquid at below 30 cents last time HIVE went to knock the $1 door. This time it wasn't 90%, coz you know....নেড়া বেলতলায় যায় কবার? So I had a bit of liquid stored, in a land far far away from exchanges!

By now we have established the golden goose is HIVE, yes? Right.

After a few long hours the price started to pull back. But I was not confident of the price to go much below my sell of 28 cents (and after two days, it still hasn't stayed substantially below 28 cents). But remember point number 3 in my strategy? ALWAYS buy back your position, don't be greedy!

Now this is the Fun Trade we've been building up this post for!

I caved in, admitted I sold off too early and decided to take the blow and buy back at 31 cents... higher than where I sold without waiting too long to avoid the risk of further compounding my loss...(because eventually I was always going to buy back HIVE...be it at 30 cents, 40 cents or 50 cents).

So I did a Burl (I hope @burlarj will forgive me for the reference hehe) and Sold Low, Bought back High!

Remember the HIVE I was pulling out of thin air from time to time, they compounded in and I managed to save the dying golden Goose and still have my initial position back, a bit more than that actually!

And once the storm settles, I can start scalping again. Right now we are in uncharted territory because hive hasn't stayed in this price range for long enough periods in the past. We're back at square one, Observe!

I invite @udezee and @rehan12 to participate in this week's Trade Mania.