Your First Day in Rabona

Hello, this is jelly again. I would like to thank anyone who showed support for the Your First Hour in Rabona post (especially @crazy-andy, curating it for @curangel project). It got double digits worth of upvotes without having to tell you I run a League of Champions team, own more RBN and more players than anyone else in the game, am #1 in Rabona-related bet earnings (+RBN1,000,000) and #1 community RBN seller (20 HBD volume). Yes, these are all currently true (actually, one of those was even true at the time I posted the guide). Now, skip the guide at your own risk!

Looking Around for Talent

Last time we agreed you are going to supplement your squad one way or another. There are three ways to do that. One is the Sign section. On the surface, it is a free resource. In fact, it is a trap as the players end up there for two reasons. They might be useless - just too weak to play the lowest leagues. Most of them are actually playable but those on the top of the list (talking the default OS-based sort) ask too high of a salary (especially at season start). This is actually a Dutch auction (they ask for less and less until some signs them) You should avoid fishing here until you have some experience. Do you really think you can already outwit people who have played the game for a while in an auction? Window shop to get the feel for what is not good enough to get for free (looking at skills vs salary) but do not sign anyone now.

When you return to the Team section, you might notice another big blue button - Scout a Player. Do not touch it now either. Your Youth academy is not ready yet. Scouting players is buying lottery tickets. Some people enjoy that. Others do not. The former would buy one (or a few) when they find extra change in their pockets. The latter just put the coin back. Either way, no one seems to play lottery for a living, although some people have happened to win enough to retire. Scouting is not part of my game but feel free to have your fun. But if you do, please do not scout until you build up your Youth academy to the highest level you can afford (go ahead and start that upgrade in the Stadium section if you wish, I have told you enough on the topic). Scouting at high YA levels gives you a longshot at a (future) star player. Scouting at Lvl 1 is like buying used scratch cards (I know, they were at discount). 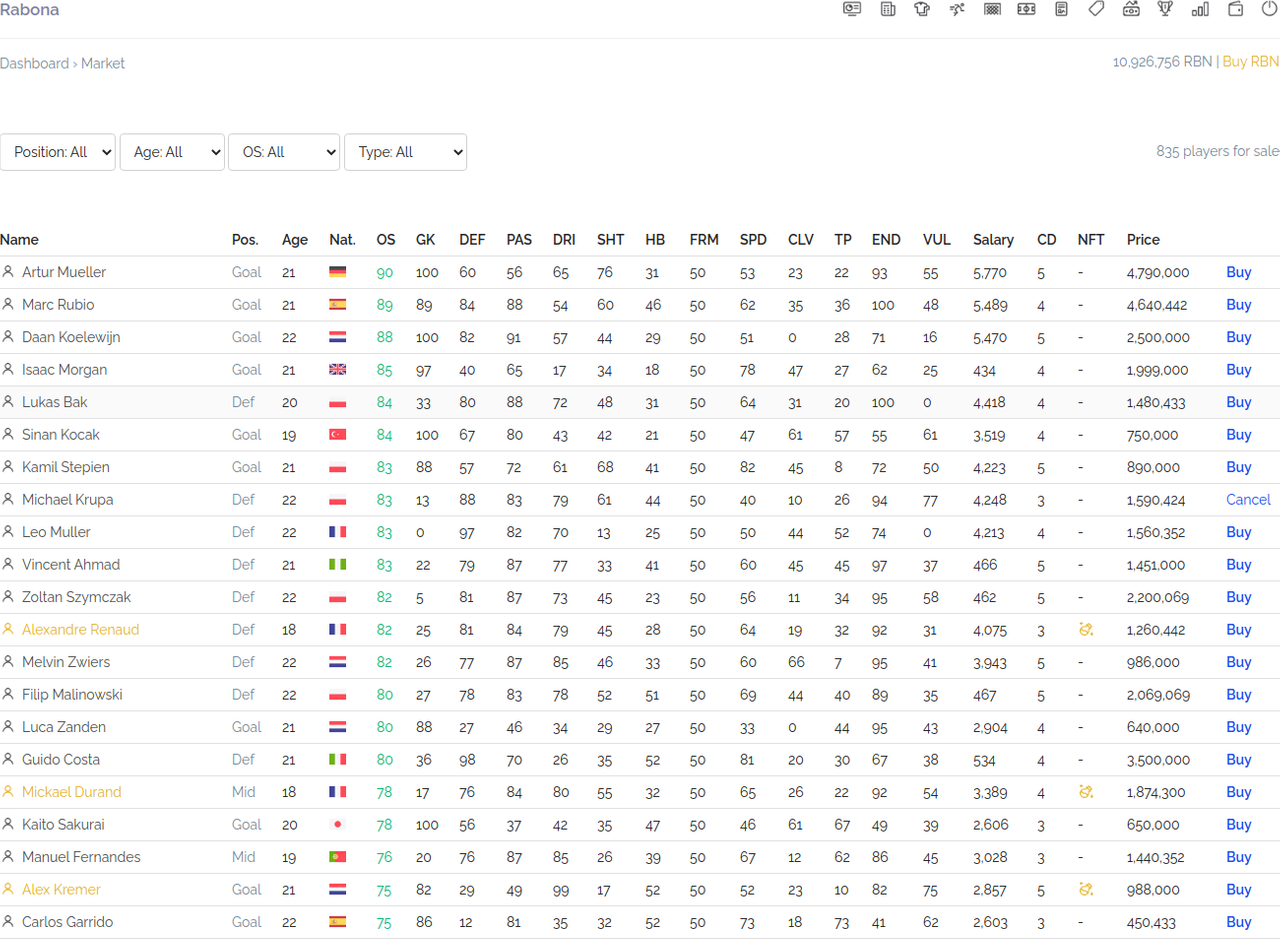 The third and final option is the Market page. This is where you actually prove your great football-managing skills, isn't it? If you followed the OS discussion, you should sense the opportunity here. Anyone can sort players by OS at look at the prices. Successful traders can read the full line and then all the player page that you can open by clicking the player name (I like to launch it in a new window to avoid reloading the marketover and over). So, is the player you noticed for a cheap price tag indeed a great deal? His SHT is great but does he have enough PAS to actually get those balls? Does his low TP stat hurt the team overall performance too much? Does his formation experience fit your team?

How could you know PAS is also used for receiving balls? What does the rest of the paragraph even mean? Well, some people come to Rabona to show how great their football knowledge is. Others start by reading rules and work from there. I guess it is time to read the FAQ by Rabona devs. If you end up with more questions than you had before reading FAQ, it is all fine.

So what attributes are we looking for? I will skip the "high GK is important for a goalkeeper" part and start from the right, looking at...

Salary is what you pay to your player on every matchday. That is, you pay everyone on the team regardless if they played or not. If you think you need 38 players because that is what Barcelona or Ajax do, you are wrong. You will go broke with the attitude. Salaries used to be flat and low in the 400-500 area but that is like asking the players to live on €1000 a month and you do not pursue the sporting carreer forthat kind of money in the western world. So players have recently started to ask for more. Best players earn around RBN 5,000 per match. It is a lot but that is not your issue right now, is it? Be careful with those free signings. You can get a free player now for a bit of headache later. Fortunately, if you sign someone you can not afford, you can cancel his contract if you can afford it. You heard right, it costs money to get rid of an unwanted player. For the stubborn managers that deny any mistake and refuse to pay, a new feature is being discussed - the ability to discard your current club and buy a new starterpack. Please do not end up there.

On the other hand, people capable of basic arithmetics can see that at some point you are better off signing a free player with high wage than paying a full telephone number on the player market. It is ok if you have to wait a few seasons to have the former player collect as much on salary as you throw at a fellow manager in a single click buying the latter. Do your math. If the Sign page offers a close deal, you can come and check later as the players lower their salary offers gradually (this currently happens after each game).

Teamplayer is the most important stat of all non-OS-influenting stats. There are only two ways to deal with it. Ignoring it (for the lack of knowledge) and overestimating it (the minute you learn about it). I will discuss it next time when dealing with team performance (I guess you already feel the connection).

This is the exception to my rule that says you need to study all aspects of the game to succeed. There is no "I will just play Fire and Life" in Splinterlands, so there is no "I wiil just play Defenders and Forwards" in soccer games. If the feature is in the game, try to understand its effects.
Rabona Vulnerability is the exception. The higher Vul, the more likely an injury is to occur. So watch out, lower VUL is better. However, you know the result of a VUL0 player collision with a train so do not complain when he is injured. You can just get a cheap replacement for the few games the player is out. And if he is too expensive, the cheat-healing is cheap enough to afford it anyway. Do not pay for low VUL.

You expect your clever players to play better? They do not. This "skill" is only used in salary negotiations and frankly, noone has noticed a meaningful differnce yet (well, the salaries are going to be more of a factor in a few seasons's time).

This is just a super obvious field present in every management simulation game. Rabona is no different other than one detail: Everyone in the game has FRM50 and it won't move.
Personally. I think this is ridiculous as the game suffers a huge oversupply of players right now and switching FRM on would increase the demand. Whatever.

OK, this one is even less important than VUL. Players from small nations are not more valuable.

All players enter the game at young age. So far, noone is even nearing the peak of their careers. While Rabona training system is so unique it deserves a separate post, a quick sneek-peek here: The age does not influence the utility a player gets from training. Everyone trains at same pace and it is only in-between seasons when age influences skills. At that point, young guys tend to improve while old guys tend to deteroriate. This is a random process, even young players can suffer a drop in one or two skills button the other hand, I have seen a +10 on SPD which is huge.

Headball is the last on the list of attributes that do not influence OS and the only one of those that can be trained. It seems underpowered compared to IRL (I challenge you to find a game with more than one corner) but there is no doubt about it being underrepresented in OS calculation. No matter how small the positive effect might be (it is non-zero for sure as we witnessed a bug that proved someone actually made a shot on goal with a header),if the HB stat is not in the OS calculation, it pays to pick a player with better headball if OS is equal. You surely cannot say you want a higher DEF defender of the two options of equal OS as in this case, high DEF is already counted in and the other guy is better at other skills that are also important.

You can log off Rabona now but make sure you log in first thing in the morning for your Second Day in Rabona. Just joking, unless the season starts by then, you have all the time you need. Get ready for some work though. You will need to sort out your gameplan, get those players, run a training - you should be glad itis still time until the games start rolling.
If your gameplan allows for spending some extra money on your team, you show your support for this series by buying the RBN in-game currency from me on Rabona Discord Server. If you had signed with my Refferal link, do not be shy to ask for the Friends and Family bonus!