For the contest we were tasked with building within the game. Fortunately, we need to build to progress anyways, so this was like getting two birds with one stone. Of course, i didn't need some opulent mansion... but i set out to build one anyhow. Although i met this challenge with some success... it wasn't without it's epic failures.

Below you can see a screenshot of the pit i dug. If you look in the far corner you will see a pool of water. I dug down to water table which is only about two stories since we are close to the coast. I thought this would be a nice plot to build while concealing the bottom two floors. This took a lot of pick-axing and ground leveling. 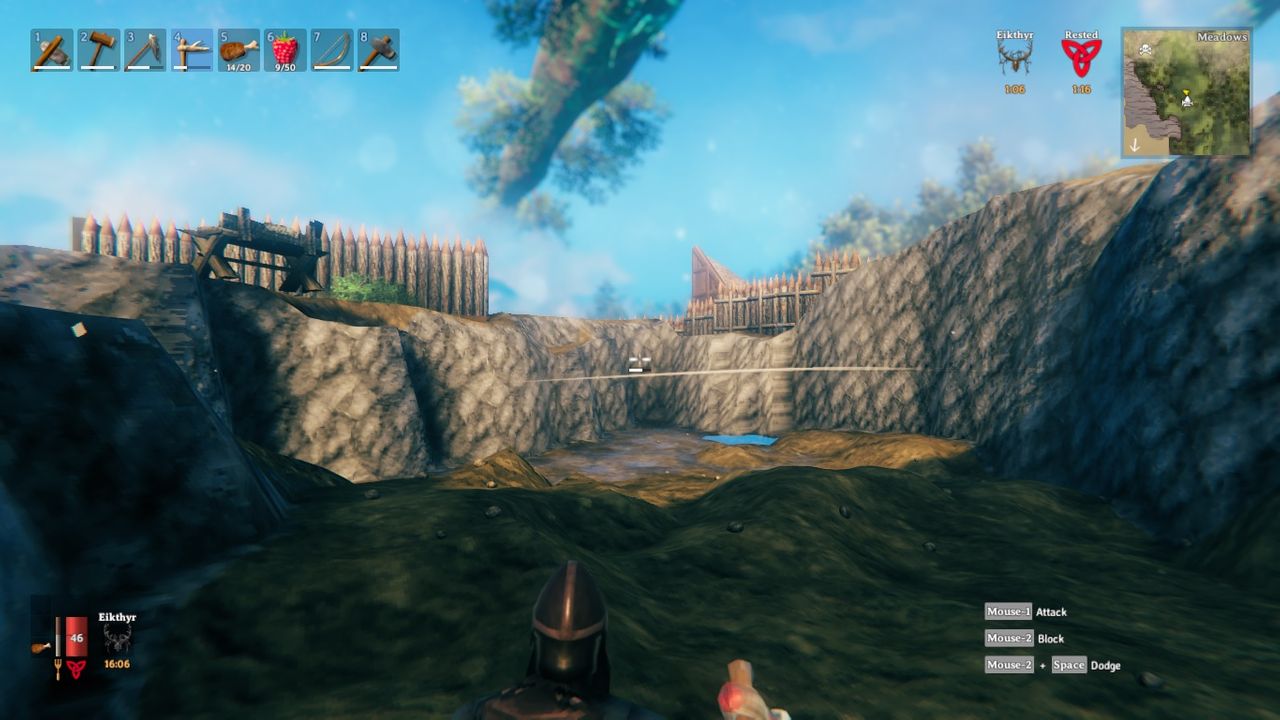 After some excruciating efforts to get the ground level, i was able to begin framing the construction. Having already had so many issues with my first build, i knew that having the framing done properly was critical! As you can see, i hadn't quite got to the hardest part yet... the roof!

In this game, without a roof your wood deteriorates and decays, especially when it rains. So, i had to repair as well as build simultaneously. Part of my epic failure was going too big on this build. I didn't realize until it was too late that i needed better structural supports to build this high. Core Wood comes from Pine trees which are located pretty far from our settlement. So, in the middle of this build i had to go harvest a whole lot of core wood to then come back and replace many of my supports for the frame. 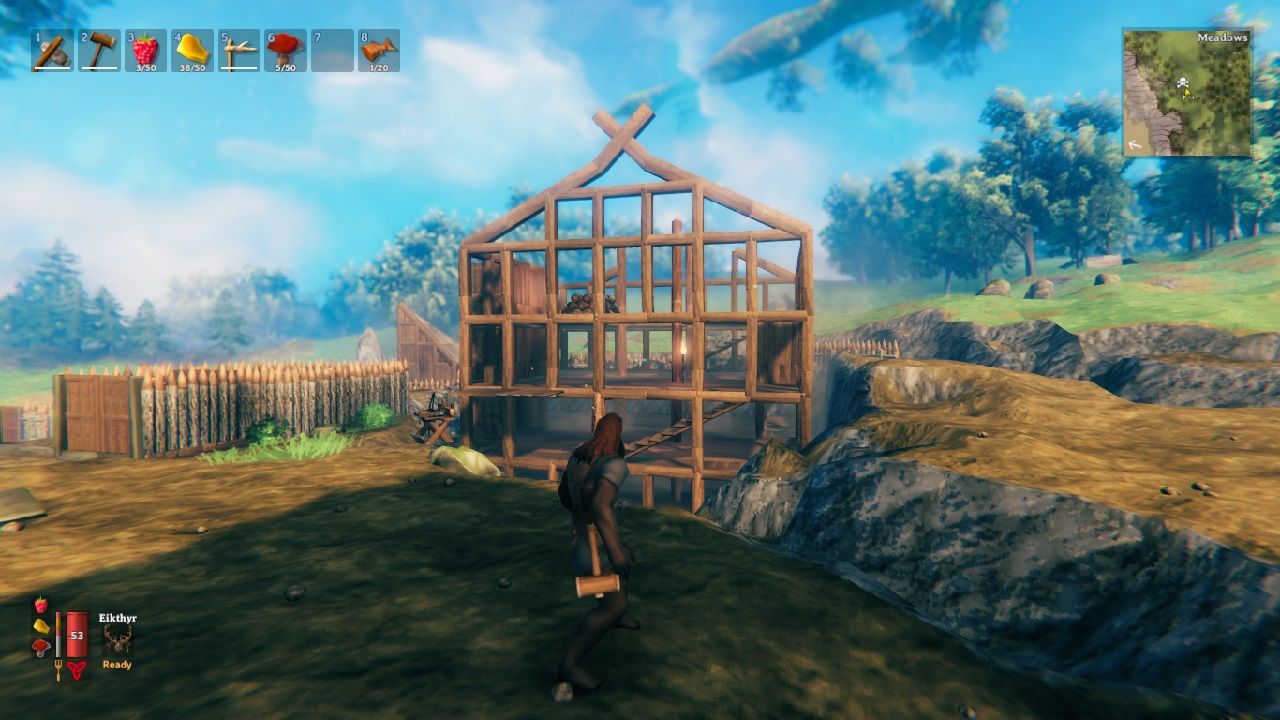 Oftentimes, the night would have already fallen when i would make it back with my Core Wood so i had to work many NightShifts. I set up some lighting which helped a lot since the nights are quite dark. It was actually pretty funny because i had made so much progress with the original frame and regular wood i was starting to feel pretty confident.

I still laugh a little that i pretty much had to deconstruct and then replace each set of support beams from the ground up with those log beams. As far as a building challenge goes i would consider myself the biggest loser... but lessons were learned. 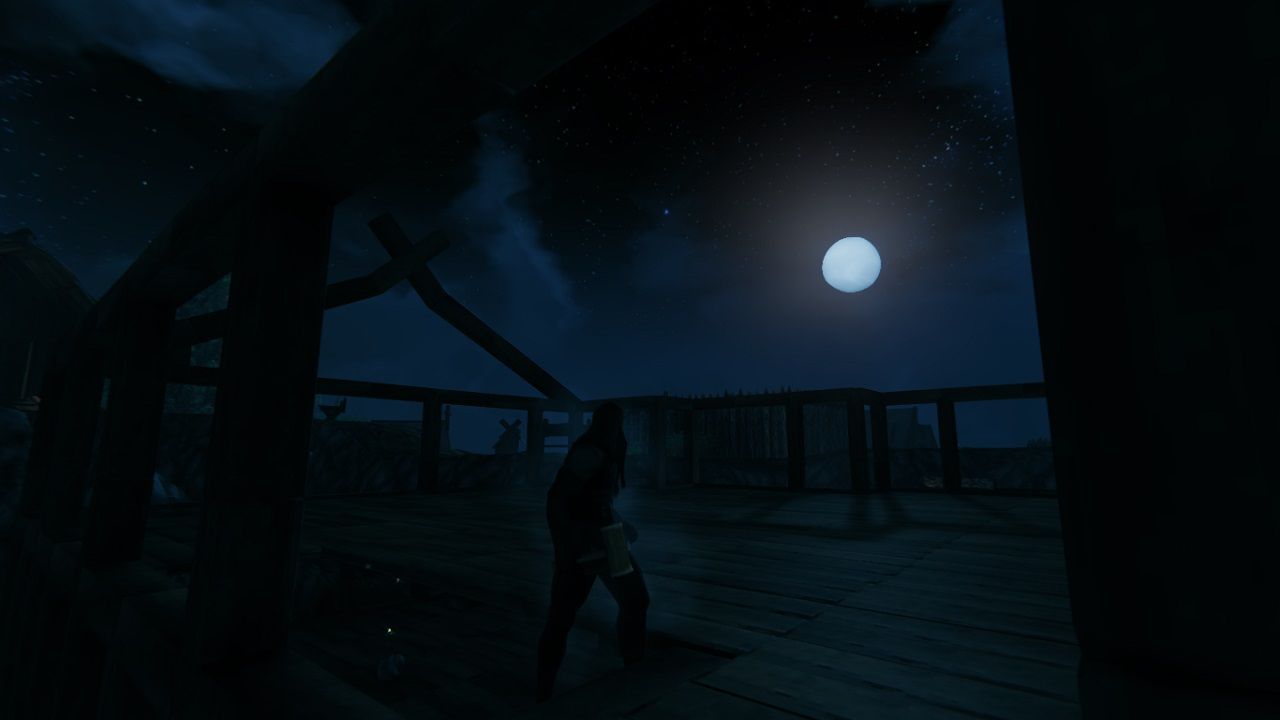 After finally getting my roof framed and all the log Core Wood beams put up i began on the siding. Building this structure was tricky because i set up a fireplace and chimney on each floor but tied it in to the interior design. If you look at the image you can see the Core Wood logs on the supports. Since it was raining so hard you can also see how brown and fresh the corner looks and how grey and dingy some of the others look. That is the deterioration i mentioned earlier.

Something that stole my thunder was realizing that i can't put fires on any of the upper floors yet. I saw a hack to do it that has since been patched. So, lightning has struck in the same place more than once! This is one Epic Fail that will be successful in the future once my character progresses more. I guess you could say i was building for the future!

At the end of this workday it began to rain and the thunder and lightning was awesome. I took a screenshot and tried to capture this lightning storm in a bottle. 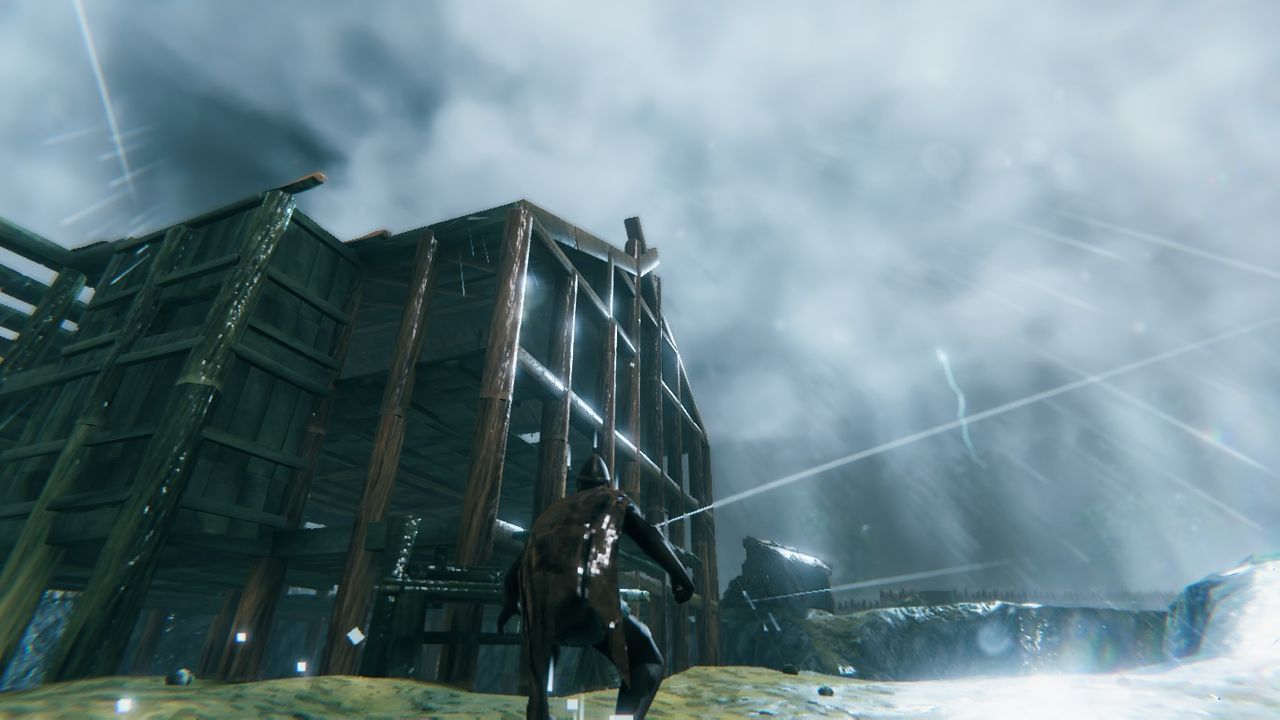 Eventually, i was able to get the roof to stay on thanks to the refurbishing of my framing supports. I also got all the floors and walls in place. This was a labor of love and although the inside is pretty bare-bones at this point... i am looking forward to jazzing it up a bit in time and making it more of a home. I have considered building a corridor and connecting it to my existing house. Now that would be cool.

So in the image, to the left, you can see the finished structure. To the right off in the distance you can see another pit i carved out of the hillside. So much of my time was consumed in running to the forest and getting wood that i decided to try a tree farm close to the settlement. 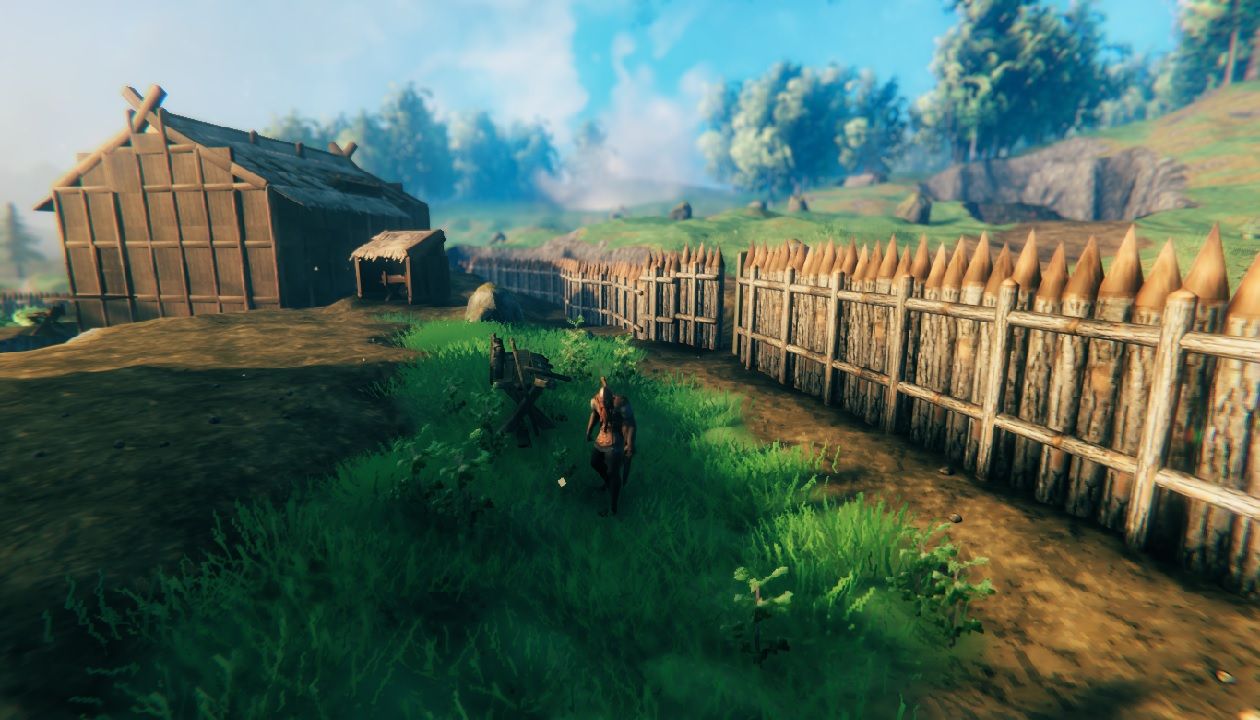 Inside that pit i planted a bunch of seeds. I carved it out fairly deep and pretty wide. The goal was to grow trees in the channel so that when i chopped down the top row of trees they would fall and create a cascading domino effect. In essence, the trees would chop themselves down since they cause so much damage when they fall. This would also save time in chopping each individual log into more logs and then chopping it down to wood.
In theory, this would be a great time saver and we could grow Core Wood right next door.

So, i planted one day during my build. A few days later after a couple of trial and errors... i had a mini forest to farm you can see in the image below. 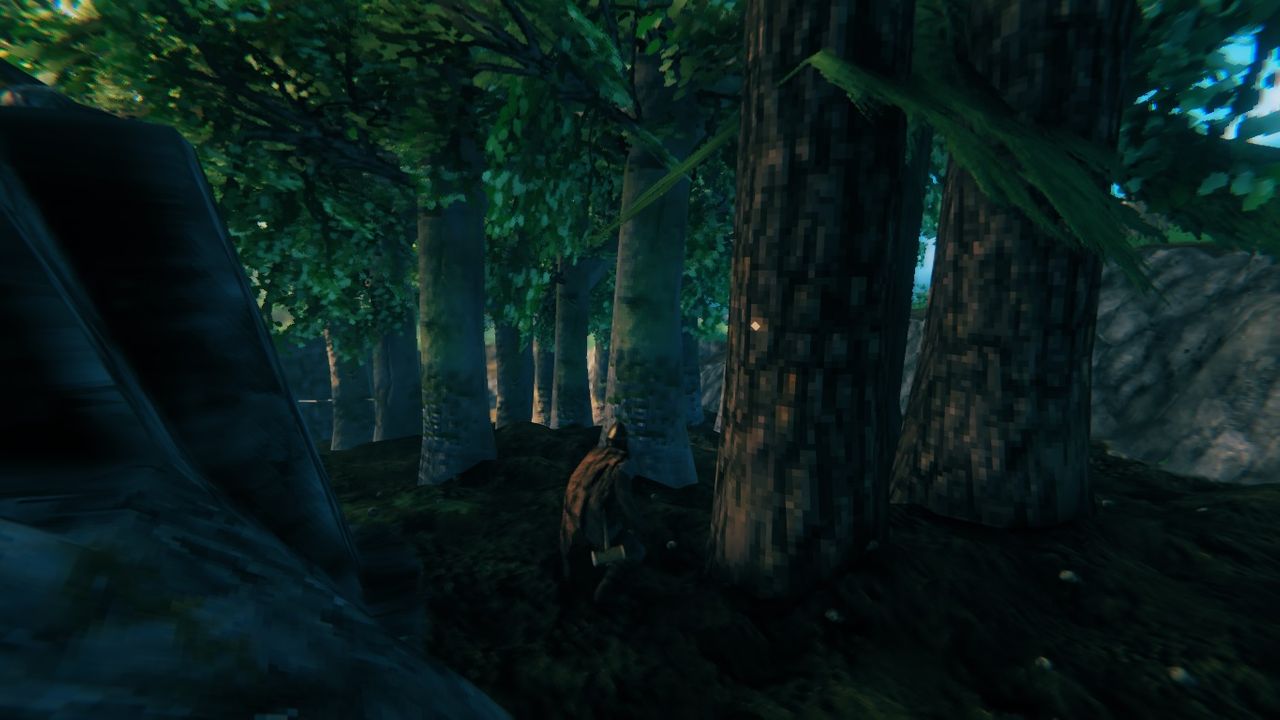 Well, as with everything else in this contest... another Epic Fail! I made the cut on the top row. One tree fell and got hung up on another. I chopped that one down and the same. There was a lot more chopping going on than i originally had hoped for. I guess you live (if the tree doesn't fall on you) and learn.

There was a bit of a cascade effect but not until towards the end of the harvesting. Something was better than nothing i suppose. After looking at the aftermath, which you can see in the image below, i realized where i went wrong. I should have dug the pit a bit wider and a good bit deeper. Not bad though for a first try. Now that this contest is wrapping up and the building has come to a close... I feel like i won based on the experience gained and the lessons learned. There is quite a bit of a learning curve on Valheim but i have had a lot of fun and frustration overcoming that curve. With the outcomes of having a nice structure to perfect and embellish along with my own Forest Farm... things are looking up.

Now, i can focus on growing my character and achieving more development in the game. In some regards i am ahead of the game but in many aspects i still have a lot of catching up to do! Thanks for taking the time to check out my post and see the updates on the Epic Adventure. If you want to join the fray the instructions to get started are down below!

If you want to get started too then come and join the Hive Viking Settlement with us! We can build together! There is also a contest for building in this server which just kicked off today. Below, i will tell you how to get started and you can read about the Valheim contest on our exclusive Hive server!! at that link there.

Valheim is available as an early release at The Steam Store and can be purchased for about $22.00 dollars USD after taxes. I had to set up a Steam account just to get this game. Once you buy it you own it! So there isn't a monthly fee or anything. From what i read in the reviews and one of the things that persuaded me to take the risk was that many folks were saying this game was better in early release than many others as final products.

Honestly, i couldn't say, but it is trending as one of the most successful games sold on Steam ever. That is pretty incredible since it's only going to get better as it develops.

Once you buy and download the game and launch it... you will have to create your character. Then you will come to a start menu which looks much like the screenshot below. If you see i circled CANCEL... that's because to join the Hive server you will need to skip that popup. 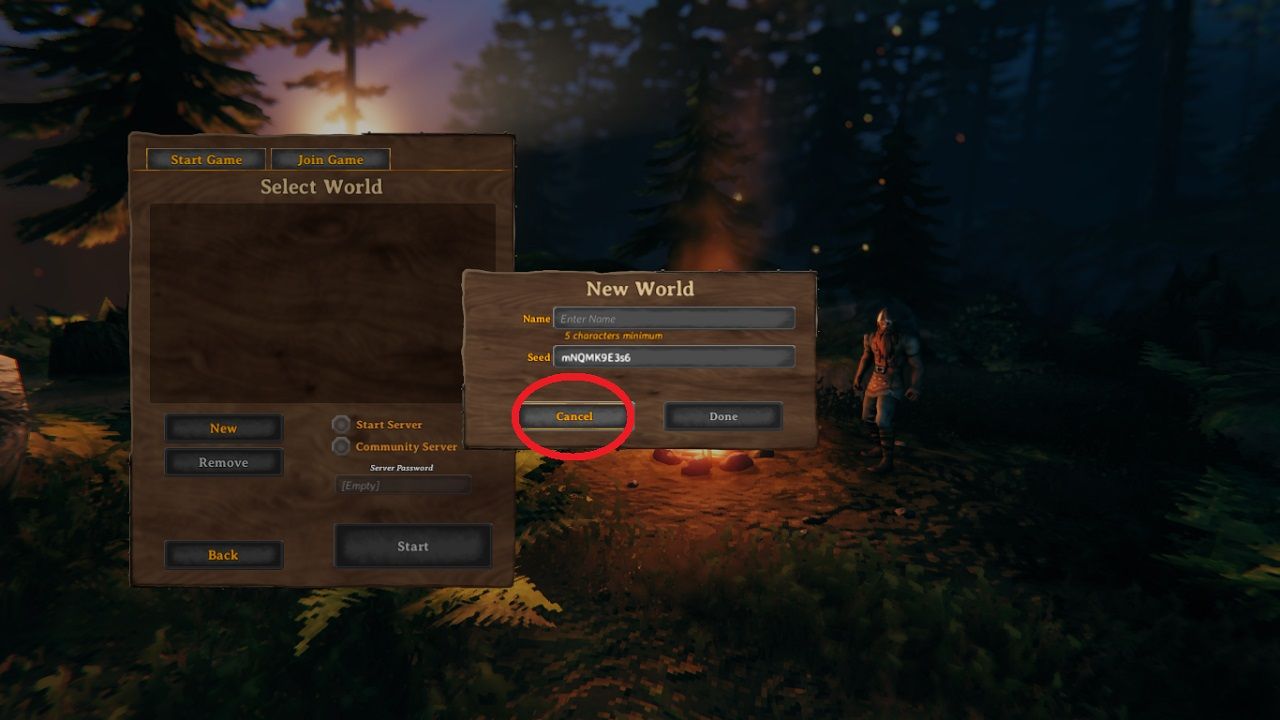 Next, you will be brought to the screen below. I put a 1, 2, and 3 in the steps you need to take to get connected. First, click Join Game. Second, click Join IP. Third, fill in the IP number to connect. After you fill in the IP you will be prompted to type in a password. Below is the IP and Password. Copy it somewhere because you will have to paste it in every time you log in to the server. 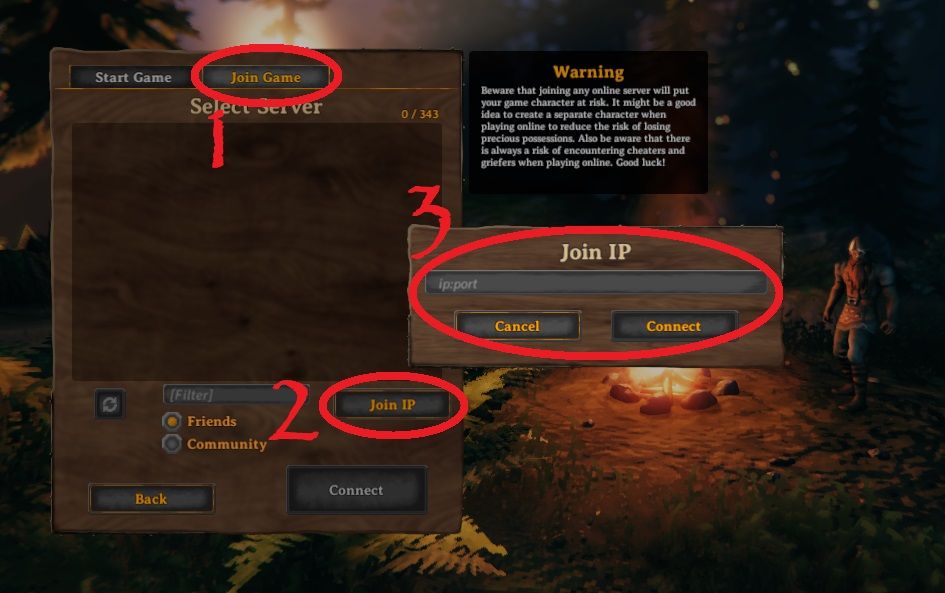 Thanks Again For Stopping By!