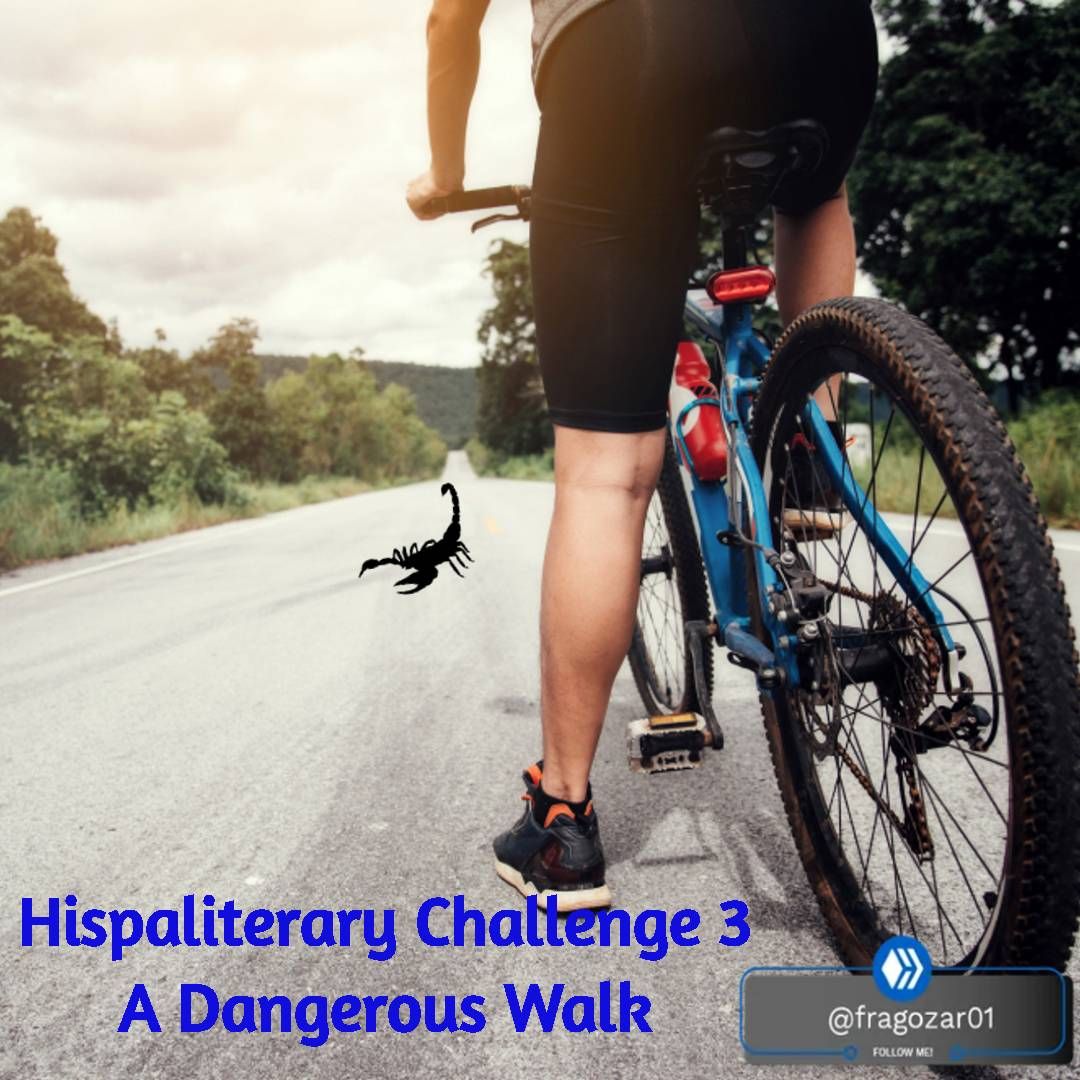 The breeze hits Alexander's face as he squints a bit to keep the dust out of his eyes. He is moving swiftly along the dirt road, pedaling hard to make his bike pick up speed. The sensation of speed and the wind blowing hard in his ears enervates his senses and he feels himself flying. A delicious breath that tastes of freedom and grandeur. The fields, now green, then with different shades of the red, parade like in a movie to his right and left, impregnating the atmosphere with the characteristic smell of ripe tomatoes. Undoubtedly, living in the countryside has been the best experience he has had in recent days.

After rounding a slight left turn, he encounters a small hill that descends to a small creek crossing, then turns and climbs to the right. Alexander leans to gain speed on the downhill and feels the wind getting thicker and noisier. Suddenly, almost reaching the bottom of the gentle hill, he notices something dark across the track. He lifts his body to get a better look as he approaches and as he defines exactly what it is, fear invades him and he abruptly tries to stop, lowering his feet from the pedals to the ground. His shoes touch the ground and begin to kick up a swirl of dust, as he struggles with the handlebars to keep his balance. In all this trance, he has not stopped watching the huge scorpion that has stopped exactly in the middle of the road. Already a few meters away from the large insect, he manages to swerve the bicycle towards the edge of the track and stops when they both fall to the ground. Quickly, he gets up so as not to lose sight of the strange and creepy animal that has cut short his cycling adventure.

While his heart is pumping hard and his lungs are working at an accelerated pace, Alexander stares at the scorpion that remains motionless in the middle of the road. Without taking his eyes off the animal, he lifts the bicycle and places it in the direction of the road already traveled. Although he is not clear about the size of the intruder obstructing the road, he is sure of one thing:

— My God, this critter is huge!

Instinctively, he takes more distance from the insect without ceasing to observe it. He wonders if it is alive, although, by the glow it emanates, he takes it for granted that it surely is. He takes a few steps away to feel safer. He thinks to himself that with so many legs, it will surely move very fast and might be able to reach him. He remembers for an instant that he has a mission to accomplish beyond where the scorpion is calmly stopped. But his fear, combined with his survival instinct, makes him desist. Suddenly, he watches in horror as the scorpion raises its enormous sting. Something he realizes at that very moment is that the scorpion is watching him. Although he does not see its eyes clearly, he feels its gaze, as black as its dark armor. The animal raises its pointed tail a little more and takes the first step in Alexander's direction, which is reason enough for him to start a fast and frantic fleeing race.

Several minutes later, pedaling like a madman, Alexander arrived at his aunt's house. His fast race to get away from the frightful animal, led him to not stop for any reason, passing without much care and at great speed through the small streams that cross the road to the field where his uncle was waiting for him. Seeing him all sweaty, tired, and covered with dust and mud, she asked him:

— Have you already gone that fast? - while curiously detailing the bicycle.

— No, my aunt! I met a monster on the road! — replies the young man, still puffing from the fatigue and the hustle and bustle.

— What do you mean, a monster, boy? And you didn't take the food to your uncle? — asks the aunt with a surprised expression, when she sees the package with her husband's lunch, which was to be delivered by Alexander to his farm— And now what is that man going to eat? — she emphasizes now with a more pleading voice.

— No, my aunt, I'm not going back that way — Alexander answers, convinced that he has saved his life from the attack of a relentless predator.

— These city boys are afraid of a worm. Now, who can stand that old, annoying, and hungry man? — grumbles the aunt, as she goes to the kitchen to continue her daily chores.

«No way, I'm going back home, I don't want to continue spending my vacations in this field, with that monster roaming around,» Alexander thinks while he looks at the bicycle that is now quite dirty and with the rear tire deflating «and I'll take you with me, you have saved my life, faithful bicycle» he concludes with a deep sigh.

Greetings, dear friends of Hive Blockchain. I am once again joining the call of the @hispapro community, through the Hispaliterario Challenge 3 and this time, presenting @hispaliterario as a meeting point for all these initiatives. In this edition, they have requested to include in our participation, the bicycle as an essential part of our tickets. Here I leave a small story, which I hope will be to everyone's liking. I also invite the dear friends of our blockchain @soychalbed and @amandaj, to join the initiative, knowing the details in this publication.