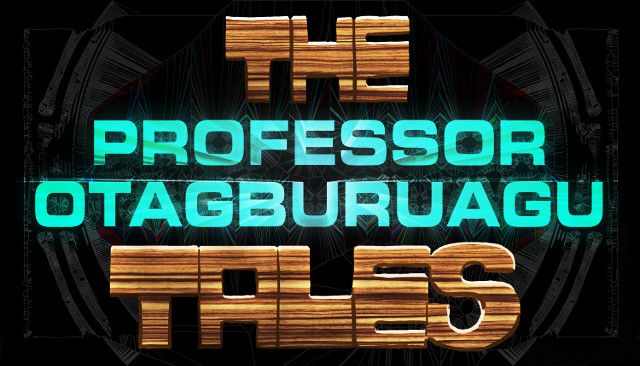 Inspector Raymond embarks on a series of investigations to dig out the
seemingly mythical Professor Otagburuagu. After a lot of side jokes,
surprises and events, Raymond hears a politician - Chief Olu Bayo say
something about meeting the Professor, a lead for Raymond to follow.

The funeral soon came to an end and the crowd started leaving very happily - satisfied! The president was truly dead, his corpse did not rise out of the casket when it was being closed, neither did a hand break out of the ground after the interment. And now the grave has been cemented and sealed, even though the president wakes up there's no going out of there. How would he tear open the cement and concrete? No way, right?

While the crowd dispersed, a great traffic jam resulted. Nigerian politicians always moved in convoys. Chief Bayo was comfortable in his own convoy, an efficient security personnel around him. There in the traffic, he even met with some other security personnel who were his old friends and still on his payroll, they were bikers, about 6 of them, he gave them some bottles of champagne and in joy they begged him to give them a job to do that very evening. There was none, so Chief Bayo promised one of these days.

So later when it got dark, and one of Chief Bayo's guards noticed that a red Camry has been following them, the Chief decided to call in the bikers to handle it. There in the red Camry was Inspector Raymond, following, to find out Chief Bayo's residence. They were on more lonely roads now.

His phone rang, it was Lucy.

"Hey Sugar Ray, how you doing?"

"I'm fine, Lucy, we can't talk right now, please, I'm in the middle of something."

"Middle of something? Mmm, tell me, is it wet and slippery? And juicy?"

Just then a bike crossed over to the front of his car and he had to quickly dodge it.

"What was that sound, Ray, did you just smack somebody's butt? You sly devil, you!"

Two more bikes had overtook him and were slowing down in front of him. "What was that sound, Ray, did you just smack somebody's butt? You sly devil, you!"

He drops the phone. And as soon as he does that he almost hits one of the bikes but it ducks. The bikes now have him in their middle, three behind him and three in front of him. They were looking like they had him where they wanted. Raymond immediately knew he was in danger and was sure it was the Chief that sent them, they must've noticed him following them, even though he had been very careful. He starts thinking on what to do. He goes in full throttle! Aiming for the bike in front of him, the bike ducks again and keeps chasing him. He pedals on till he has all six bikes behind him,
they're chasing behind and he's in full speed, then he steps on the breaks, two bikes collide with the rear of his Camry and their riders were sent flying in the air. The other four bikes sped pass him and he branches into another road by the right.

He speeds as much as he can now. The unharmed bikers were berserk, their instructions were not to kill but to stop him from trailing, but right now they concluded on teaching him the lesson of his life as they looked down on their hurt comrades writhing on the ground. One biker stayed back to help the fallen ones and the other three chased Raymond with everything they've got.

Raymond tries to find Chief Bayo's entourage through other routes. With the bikers searching for him, he tries to hide from them at the same time. He slips through some streets, cuts through others. At last he sees the residence the entourage pulls up in from a distance, and he started heading home, just then the bikers had him in sight. Mad chase.

They were still in a quiet part of the town so the bikers could easily do what they liked, Raymond noticed them coming and sped crazy. The bikers knew they can't pull him over with their bikes, so they sought to get in front of him and do him in with their guns. They recalled how Raymond had knocked out the other two, so they made sure not to be directly behind him or he might step on the breaks again. Once Raymond noticed another road to the right in front of him, he stepped on the breaks, and the bikers sped past, then he branched right only to find out it was a dead end.

In a few more seconds the bikers were behind the stucked Camry and shot the being out of it, got the the front of the car and kept shooting it up. And when the had shot just enough, they opened the car to pull out the dead body and there was no one in it. Raymond had left the car there as soon as he saw the dead end and escaped on foot.

"Professor Otagburuagu, the king maker. I hear you can pick a man from the
dusty streets and make him the President."

"But a man from the dusty streets would most likely be unable to afford my
fee, you see?"

"Hehehe." Chief Olu Bayo chuckled reluctantly, and frowned almost
immediately, he was still scared from the shock of seeing Professor
Otagburuagu seated in his living room. Yes he had contacted him and paid
for his services, but a meeting was not arranged, the Professor had said
he'll see him "whenever". I understand you want to be the president.

A meeting wasn't fixed for this night either, and the Chief hadn't heard
any sound at the gates or at the door. He was alone at home, wife and
children in a different continent, and it was 1am. He had guards stationed
outside alright, and had been sleeping upstairs when he suddenly became
restless and had the urge to come downstairs only to find the professor
comfortably seated on the sofa, staring steadily at the TV. He was taken
aback.

"I understand you want to be the president." The professor continues.

"But I'm at a most disadvantaged position." Gaped Bayo.

"Not as I see it. Your party has produced a Yoruba president and a Hausa
president immediately after, now it is the turn of the Igbo tribe, so you
can't contest because you're Yoruba."

"Go ahead and declare your intentions by all means."

"And you would be expelled. You cannot go to another party and become their
candidate for president, even if you do, take it from me that you wouldn't
win. You know Chief Ajah, of the PTP party, he's a rich desperate old
gentleman also with a secret chronic illness. He is in dire need of a vice
in order to contest for president, he hasn't found anyone yet, he is an
insecure fellow, having lesser education, he needs someone he picked from
the gutters that he can look upon as a servant. If a person of your
standing is expelled he would pick you up to be his vice. He most certainly
would win, he has all the money in the world."

"But I want to be president, not vice."

"When the President dies immediately after being elected, the vice takes
over, section 146(1) of the 1999 constitution."

Chief Bayo smiles like a little boy. Professor Otagburuagu walks out the
door and is gone.