Russian director Nikita Mikhalkov claims billionaire Bill Gates might be seeking to implant humanity with microchips under the guise of vaccination, seeking to control people and ultimately “solve” overpopulation.

The ongoing coronavirus crisis has produced a number of wild conspiracy theories, as some are trying to find the “secret” reasons behind the pandemic. A handful of them revolve around Microsoft co-founder Bill Gates and his efforts to develop a vaccine against Covid-19.

One Microsoft patent that recently received international recognition has been found by many ‘truth-seekers’ to be particularly alarming. The patent WO/2020/060606 describes a “Cryptocurrency system using body activity data” – basically, a device which can be used to ‘mine’ some digital coins using one’s body. Or, rather, “award cryptocurrency to the user whose body activity data is verified,” as the patent abstractly puts it. 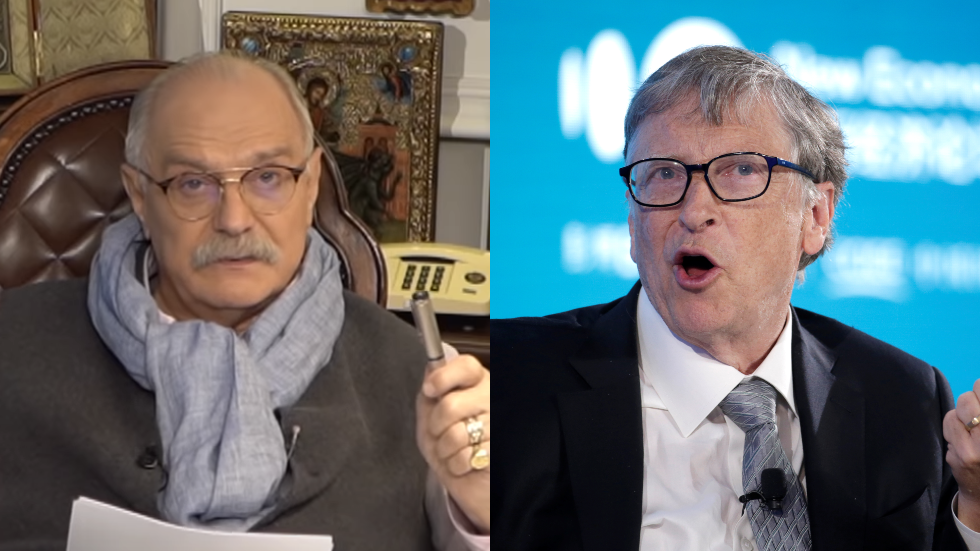 The patent did not escape Nikita Mikhalkov, renowned Oscar-winning film director, who pushed quite a theory in a new issue of ‘Besogon TV’ (roughly translated as ‘demon banisher’, dubbed, ‘In whose pocket the state is?’ The episode was aired by the Rossiya 24 TV channel on Friday, but was then quietly taken down from its schedule and not repeated – something Mikhalkov has taken for an act of “censorship.”

Mikhalkov claims the very name of the patent has an occult meaning in it, accusing Gates of actually seeking to implant humans with microchips to control them, and tying it to his potential vaccination program.

The 060606 part is somewhat alarming. You probably understand this, right? Is this a coincidence or an intentional selection of such a symbol, which in the Apocalypse of John is called the ‘number of the beast’ – the 666.

Mikhalkov then goes on a rant about a dystopian future where digitized (and microchipped) society is split into two unequal parts, namely the elite and the human drones they control. In search of Gates’ global “co-conspirators,” he squarely points finger at Herman Gref, the head of Russia’s state-owned bank Sberbank, a known proponent of the digitalization of society. The director’s theory falls short of explaining how that system would solve the overpopulation problem, though – or why Russia would be keen to follow the American business magnate’s lead, for that matter.

Like any other outrageous theory peddled by a celebrity, the new issue of ‘Besogon TV’ went viral online, getting around 700,000 views in less than in a day.

Mikhalkov’s conclusions might be quite far-fetched, and the patent WO/2020/060606 is not directly linked to Gates, who has technically stepped down from Microsoft’s board to focus on running his and his wife’s Bill & Melinda Gates Foundation. Neither does it mention microchipping, instead describing “sensors” coupled with a “device” to register the body activity. One alleged purpose of such a technology described is to encourage healthy lifestyle with users awarded cryptocurrency for exercising.

Should that be a hype killer then? Hardly, as some would still be freaked out by the potential Black Mirror-esque applications of this tech, while the discussion on the encroachment of technology (and various forms of controls) on our daily lives has never been more relevant. And those who fear being forcefully microchipped by an evil corporation, should probably first check their own pockets for a little “tracking device” called a smartphone, which they had purchased and carry around voluntarily.