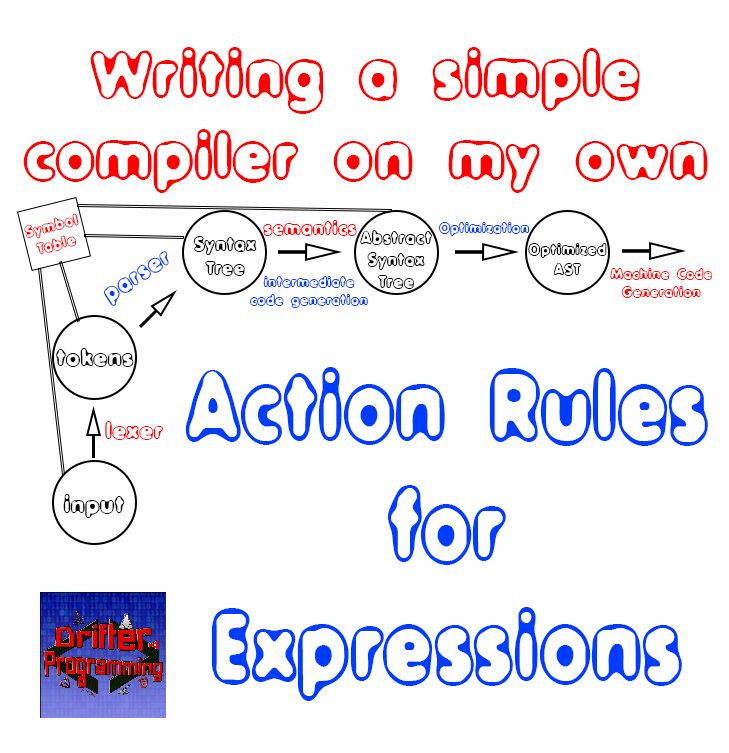 Hello it's a me again @drifter1! Today we continue with my Compiler Series, a series where we implement a complete compiler for a simple C-like language by using the C-tools Flex and Bison. In this article we will write the needed action rules for Expressions, excluding function call for now!

Separating the operator tokens of the lexer

Having different operators that return the same token to the parser, we of course can't know which exact operator we have in each case. So, before getting into the actual expression rules, we first have to find a way to overcome this problem! To fix it we can set a specific value for the Value union val.ival, which depends on each operator. Value val is the token type that we chose to have for most of the tokens.

More specifically, the tokens that represent more than one operators are:
In the AST structure we defined some enums for all these operator types to be able to separate them in each expression node. And so it's wise to use these already defined values for the separation of the operators in the lexer. This means that we have to set the val.ival value and then return the token type to the parser.
So, the lexer.l file now contains:

Pretty simple right? Let's now get into the expressions!

The grammar of our language allows many types of expressions. In general, we can say that we have the following expression cases: 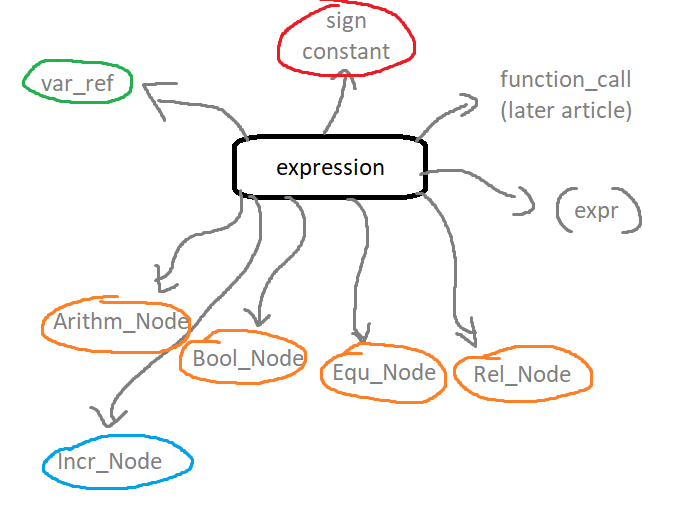 So, an expression can be:

Let's take a look at each of them, grouping similar ones together!


Variable with or without reference

A var_ref node can be visualized as following: 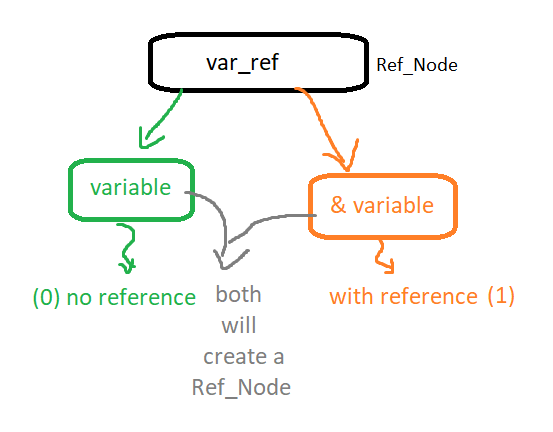 Let's expain this a little bit better. The "var_ref" rule has two sub-rules: "variable" and "REFER variable", where REFER is the symbol '&', mainly used for address references. As we saw last time the variable rule is used for simple variables (ID), pointers and arrays, and so for any kind of variable that can occur in our language. The variable rule gives back the variable information in form of a symbol table entry. So, this information is accessible in both sub-rules. The rule with the '&' symbol will have to "add" some new information, which tells us that we are talking about a reference of a variable. There is no entry for that in the symbol table definition, but we should also not add this information there! Any change in the symbol table entry happens globally, which is not something that we want to happen! You might have noticed that we don't have a AST Node type that stores symbol table entries yet. An expression is an AST node and so passing the information of this variable reference higher, can't be done right now!


So, where does all this all lead us into? Well, we need a new AST node type for variable references. Let's call this new Node_Type "REF_NODE" and the corresponding structure "AST_Node_Ref". This structure will store a symbol table entry and an integer value "ref", where '0' means that we have no reference, whilst '1' means that we have a reference. Creating this new structure we of course also have to create a function that creates such a node. We should don't forget to make changes in the node printing function "ast_print_node", so that it includes this new type in it's implementation.

The ast.h file will now contain:


In the ast.c the node creation is implemented such as:

The print node function has no big changes and so I will leave it to you to go to GitHub to check it out :P

So, by having this new node type we can now set the types of the non-terminals that occur in expressions in general and the case that we are covering right now. The "var_ref" rule of course has to be of type "node" being a AST_Node. Of course an expression is also a node and so we have the following non-terminal definition:

These action rules look as following:

This is a somewhat simple case that can be visualized as following: 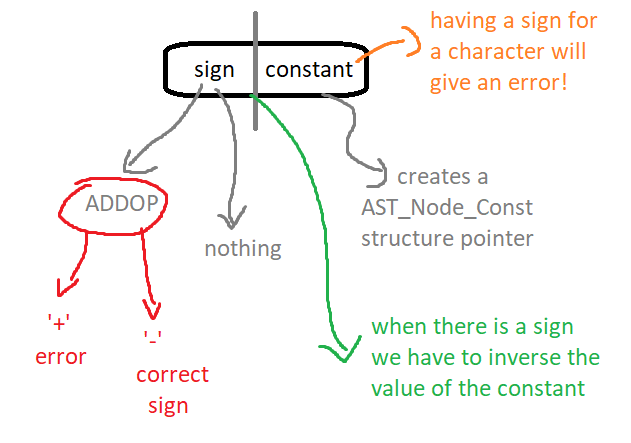 The "sign constant" rule is build up of a constant, that already stores a constant in form of an constant AST node and the optional sign rule. The sign rule either is an ADDOP (where we will have to check if it's an '-') or nothing/empty. Storing an integer value in form of the Value.ival entry we can pass this information over to the "sign constant" rule, through the sign rule. Let's say that '0' means no sign, whilst '1' means a sign which of course is also correct. When having a sign we of course have to inverse the value of the constant depending on the constant type, which is pretty easy to do using a switch case statement!

And so the action code for these rules is:

The rest of the operators can be summarized in the following visualization: 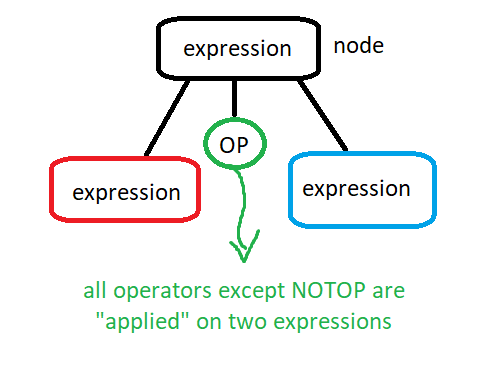 All the operators are very simple. They have a left and right side and a operator depending on their type which can be: arithmetic, boolean, equality and relational. The information about the exact type of operator is either directly known from the token (token of one operator) or is stored in the token inside of the Value.ival entry. All except the NOTOP operator have two childs (left an right). For the NOTOP operator we add the single operand as the left child, whilst the other is NULL.

In code the action rules are: Note that we will also have to do type checking someday in the future!