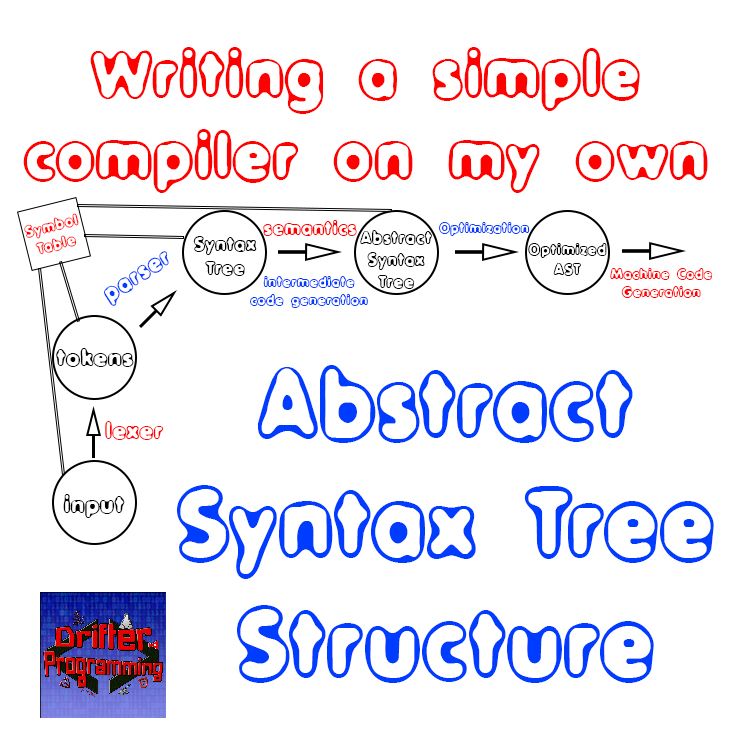 Hello it's a me again @drifter1! Today we continue with my Compiler Series, a series where we implement a complete compiler for a simple C-like language by using the C-tools Flex and Bison. In this article we will get into how we implement an Abstract Syntax Tree (AST) as a Structure used in the Compiler.

From this article on we expand our compiler to include a new structure, which is the Abstract Syntax Tree. Knowing that this structure is very important and that it's management functions will take up a lot of space, it's wise to make new code and header files, which have to do with anything related to that structure. That's why we now create a new header file "ast.h" and a new code file "ast.c".

What these files have to contain

In these files we will have to define and implement a lot of things. Those have to do with the actual tree structure, and also with things that we use to define node types, operator types and value types. We will not make a different node for each case of "similar" expressions and statements, but will combine them and separate them with the help of other structures. By that I mean that we will have to define some values (with define or enums) that will help us distinguish node and operator types from each other, so that we can store this information with ease. In the same way, we also have to define a structure (union) for different types of values. Any constant, for example, might be stored in the same "constant node" structure, but will of course have a different type of value, depending on the constant that it is (int, char, double etc.).

So, after this somewhat extensive introduction, let's now get started!

The language for which we implement the compiler for allows only some specific types of statements and expressions. In previous articles we described which exact grammar and syntax this language follows by also implementing this syntax in form of a Bison parser. This means that we know which exact nodes are created when parsing the language in form of the simple "parse tree". As we said last time, this parse tree is complex and large and contains lots information, which children-nodes can easily give to their parent-nodes, making those children useless! That's why we create the more condensed form, which is also far more simple to use, by which I refer to the AST. By also knowing the operators and datatypes that our language has, we can set up and define structures and values for these types...

So, how many nodes does our language need? Well, first of all it might be a good idea to define a simple or basic node with no special use, just so that all the others can be "type-casted" to this node-type.

After that we need:     All these node types can be defined easily using a so called "enum" structure. And so, to store all these different types of nodes, we can define an enum "Node_Type", which looks as following:


An enum is similar to the millions of defines that we used till now, but much easier to edit, cause we will not have to change the defined values of many node types whenever we add or remove some rule (something that I did until now). Also, note that we defined it using "typedef", which similar to structs and unions now allows us to declare an entry by simply using the keyword "Node_Type". Being an integer in the range 0...N we could of course also simply define an integer and use the different names we gave to the entries of the enum. Yes, there will be some overlapping, but we will use the values 0...N knowing which exact "thing" we are referring to, and so node, operator and data types will not "care" about the same value being used in other parts of the compiler.

In the same way, let's also ask ourselves, "which operators do we have?" Well, pretty simple question. Knowing our language we know that there is a number of operators, which can also be grouped and separated into some categories. That way we have arithmetic, boolean, relational and equality operators. As operators of the same category will have similar "behavior" we will later on define a structure for each of them. Using the same concept that we used in node types, we can therefore define an enum for each of these types of operators. You might remember that we grouped many of those operators depending on the category already. The greatest example might be the Relational and Equality operators, which are all being represented by the same exact token. Another example is the ADDOP token, which represents both the addition and subtraction operation! Also, the increment and decrement operations are both represented by the token INCR.

The operators of each category are: 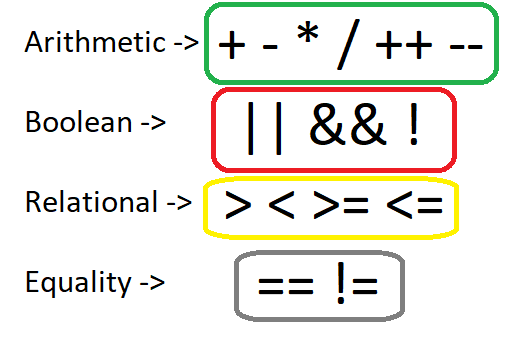 As enums these operators types can be defined as following:

Mostly for storing the value of a constant node, it might be useful to create an union (to save storage) of the different values that can occur. Knowing that we have integer, real, character and string constants, we will create an union of the name "Value" with an entry for each of these types. That way we end up with:

Pretty simple right? This union will be used for even more later on, by maybe even replacing the 4 separate values that we had in the YYSTYPE union of the Bison parser. We will get back to this structure later on!

So, all this stuff that we covered until now was quite interesting, but surely not the main topic of today's article! The main topic is how exactly this tree structure called AST will be implemented. Being a tree structure and knowing that we have many different types of nodes that we discussed previously, the basic structure looks as following: 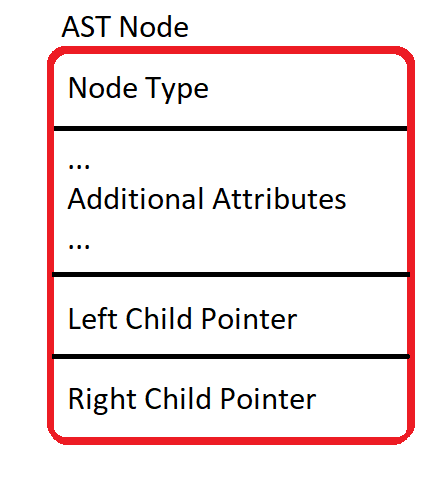 So, first of all, all the nodes have to contain a Node Type, so that we know which entries it consists of. Depending on the type of node that we are talking about, a node will have additional attributes and information stored in it and might even include more children node pointers or none of them (constant for example).

As a structure the basic node is being defined in code as:

This is the type of structure that we will mainly use, by type-casting the others that are more specific to it. After all, pointers can point to anything (word-play), as they simply store a memory location/address.

So, what follows now? A lot of typing! We have to define a structure for every single node type that we talked about previously. Each of these types also needs a specific way of "creation" that we will leave for next time! Including lots of comments for each of them, I guess that I don't have to explain much about the code. These actual attributes might change later on, if we find difficulties when using them. We could also create new nodes or even remove some that I thought about now if they prove to be completely useless or unusable.

The structures for the remaining types, categorized somewhat, are:
Still alive? Haha, I guess there are lots of them! It might be a lot of work to do, but having one single AST Node structure that contains the information of all the nodes that we can have, would just be horrible! It would use up a lot of space, similar to what we are currently doing with symbol table entries. Later on we will try to optimize the Symbol Table too, by creating a different structure for each different symbol table item, as we can have a simple variable, pointers, arrays, function call and functions.

Before leaving I would first like to show some simple "create" functions. Creating a basic node is very easy, we just have to give the node type, left and right child as parameters, do a correct memory allocation, set these entries and return a AST_Node structure pointer. The function for that looks as following:

In the same way we can also create functions for the declaration and constant nodes. Both of them don't need a type parameter, as we can set it directly via the function. A declaration node needs the data type and symbol table entries in form of an dynamic array. The constant node needs the constant type (data type actually) and value in form of the Value structure. In the end we will return a type-casted pointer to the AST_Node structure!

So, the code for those cases is:

The remaining functions for creating and some others which are also quite important will be discussed next time...

Integration with the Compiler

To integrate all this code with the rest of the compiler we have to include the code file "ast.c" in the parser and the header file "ast.h" in both the parser and the lexer. I guess it's also worth mentioning that other headers are not being included in the AST code and headers as they gave multiple declaration errors, while compiling the compiler. Also, including the AST structure, the YYSTYPE union of the parser will now looks as following:

You should go to GitHub to understand the changes in the Code structure!

The following helped me through today's procedure: