Hello it's a me again @drifter1! Today we continue with the Electric Circuit Simulation series, a tutorial series where we will be implementing a full-on electronic circuit simulator (like SPICE) studying the whole concept and mainly physics behind it! In this article we will modify Kirchhoff's Laws, using a concept of Graph Theory which is called an Incidence Matrix. Doing that, we will be one step closer to the automation of the linear system creation...

For a graph G of n vertices and m edges, we define a n x m incidence matrix I(G) or A0. The elements of the matrix show us how many times vertex vi is incident to edge ej. Don't confuse it with the adjacency matrix that is a graph representation.

Either way, the general form of an incidence matrix is:

In the case of un-directed graphs, we put:

In the case of directed graphs, we put:

The reduced incidence matrix A is obtained by deleting any row of the incidence matrix A0. Thinking about Nodal Analysis this will be quite useful as one of the vertices is somewhat "eliminated" (reference or ground node) and of no use in the linear system. So, we will always remove the row about the 0th node...

Before we get into Kirchhoff's Laws and how they are modified based on Incidence Matrices, let's first create the incidence matrix for a simple directed graph. As you can see this Graph contains 5 vertices and 6 edges. Based on the rules for directed graphs (1 when "leaving", -1 when "entering", 0 else), the Incidence Matrix of this Graph is:

Before we get into the modified versions of Kirchhoff's Laws, we should first explain the various notations of symbols that we will use in the equations. Even though we use common quantities and symbols, some might look very similar (E.g. v and u) in LaTeX.

The Mathematical notations are:

In the Modified Laws we will be using: The dimensions of the matrices and vectors are:

Using all this we can now rewrite the Kirchhoff Laws... 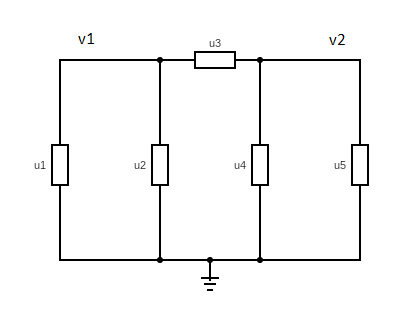 Made with Circuit Diagram

This circuit has 3 vertices and 5 edges, which can be any circuit element. Selecting one of the vertices to be the ground node (as it is shown in the diagram), we can create the following Reduced Incidence Matrix:

where we consider the currents i1, i2, i3 to be leaving node v1, i4 to be leaving v2 and i5 to be entering v2. That way each of them is basically entering or leaving each circuit element. In this previous example the rectangles could be anything and so the value or equation of each edge (ui) is quite diverse. Remembering how Nodal Analysis had trouble with voltage sources and Mesh Analysis had trouble with current sources, we will use today's concept of the Incidence Matrix and the Modified versions of Kirchhoff's Laws (KCL and KVL) in the next articles to make another modification to Nodal Analysis. That way this method will be able to cover elements that can be written in respect to current and elements that cannot be written in respect to current, but only voltage. To keep things simple in the beginning we will first make a Static (or DC) Analysis of Electronic Circuits, where the behavior of Capacitors and Inductors is "static" (the first acts like an open circuit, whilst the second acts like a simple wire).

And this is actually it for today's post! I hope that I was able to explain everything as much as needed!

Based on what we covered today, next time we will modify Nodal Analysis again to automate the generation of the Linear System for Static (or DC) Analysis...something that might take more than one article complete (not quite sure yet).