Why you should prefer eating cannabis over smoking them 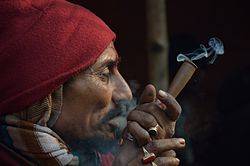 blow up like a pro! . Credit: wikimedia CC3.0 license.

A very close friend of mine recently fell into a very severe depression, following many failed attempts at getting his hands on his dream business deal, one failure after the other and enhanced attempts yields only a little improvement, despite his huge success on other aspects of his career, his inability to win over clients for a deal which he described as the most interesting part of his career still makes him feel like he wasn’t doing enough anyway, constant thoughts, trials and failures over getting the attention of these sort of clients got him into deep depression, which on the extreme causes him to lose consciousness over some minutes, only a loud shout out could get him back from the far end of his long thought. This developed for a while and I advised him to see the doctors at the University Teaching Hospital where I also study.

It’s was a high degree of depression, hence the doctors prescribed several Anxiolytics and anti-depressants to help ease the anxiety, on several suggestions and modification of his dose schedule, the doctors also added marijuana to be the major antidepressant in his medication this is to prevent the high level chemical reactions associated with the metabolism of the synthetic Anxiolytics and antidepressants, hence the need to go for a more natural approach which would have a lesser side effect and allow moderate medication and slow recovery over a long period of time which will unarguably exceed a month.

‘My big friend’s going to turn to turn into a certified smoker!’ that I thought to myself and let out a pretty easy smile before the doctor continue, as you could guess he asked me why I smiled and I gave a frank answer, but he gave a loud laugh and continued, anyway, I am pretty much of stranger in the medical psychology, narcotics and hallucinogens until. ‘He won’t be smoking them man!’. This wasn’t a surprise to me though, but the fact that my friend will be missing the opportunity to smoke these buds without restriction made me feel sorry for him.

Out of the hospital, back to my personal time, I continued my research into why the doctors preferred that he ate these weeds as opposed to lighting them up and vaping up which would bring on the essential feeling which every non-smoker would envy a smoker for.

This is just one out of the several medical applications of marijuana and I felt the urge to share it with my friends and readers over here on steem, smoking appears to me the most popular route of consuming trees, however, I’ve witnessed several case of consumption via the gastrointestinal tracts by chewing them, or replacing the dietary vegetables with marijuana. Medically speaking, differences exists between these two routes in terms of:

Just like any other drugs, marijuana also face the fate of overdose, abuse and wrong consumption, for medical use, there is a high need to ensure that the patient doesn’t take a less amount of the prescribed dose and most importantly that he doesn’t take a higher amount of the prescribed dose which even stands to cause a higher damage, hence the need to determine the right dose as compared to the body index and body size. Dose determination for marijuana and other natural antidepressants and Anxiolytics is much easier when consumption is via oral routes and factors such as quantity, body index, viability of the liver and control of addiction are taken into consideration and a control means easily deciphered from the existing resources and data.

Hence one can easily peg the consumption schedule to 8-10mg per unit of body size for consumption via the gastrointestinal system, but when consumed via smoking, this tends to be a bit more tedious as the burning effect makes it hard to determine the actual amount of marijuana consumed, thus overdosing is made easier as the patient attempts to decipher the amount consumed through the immediate effects he feels after consumption which always results in ‘topping up’ over a number a number and the addictive sedative effects it brings prevents the consumer from realizing that he/she is already overdosed.

However, if the patient decides to stay put and avoid topping up, he/she will inevitably consume less than the required amount.

Cannabis contains over a hundred cannabinoids, cannabinoids are chemical compounds which acts on the cannabinoid receptors to alter the activities of the nervous system, the principal cannabinoid contained in cannabis is tetrahydrocanabinol (THC).

The metabolism of xenobiotics involves making these insoluble chemical soluble to enable dissolution, absorption, distribution, metabolism and excretion after these activities have completed to avoid continued action in the body, pharmacodynamics and pharmacokinetics comes into play in an attempt to balance the effects on the drugs on the general body system.

When cannabis is eaten, the metabolism is via the liver, the metabolism of tetrahydrocanabinol in the liver converts THC into 11-hydroxy-tetrahydro cannabinol, a very active metabolite capable of crossing the blood brain barrier and causing sedative effects on the nervous system.

Smoking of cannabis channels this compound (THC) directly to the brain, thus there is no need for the addition of reactive groups and conjugation to enable solubility of the compound.

Onset of action and duration of effect Being transmitted directly to the brain, smoked weed have a very rapid onset of action as the time taken to metabolise is saved, onset of action is rapid but sometimes could take about 2-5minutes before the full effect is felt, in contrast, metabolism via the liver hepatocytes is relatively slow as the consumed weed would take a period of time to react according to the schedule of metabolism of xenobiotics and just as other foreign chemicals, rate limiting steps are involved and this slows the onset of action, the consumer would feel the effects of the cannabis after 30minutes to 2hours of consumption. comparison of the effects of marijuana when smoked vs when eaten. Credit: quora image deviod of copyright restrictions.

According to the receptor theories, Ligands which triggers fast actions are always short-lived, thus a rapid onset of action entails short-time of expression of the conveyed impulse this is also the same in hormone transcription, effect of cannabis when smoked only last for about two hours after initial onset of action.

In contrast, eaten cannabis lasts very much longer amidst the long time taken before its effects is initiated, on metabolism, the body cells stores an amount of the metabolised 11-hydroxy-tetrahydro cannabinol and releases it gradually, hence the action is continued on any release of the compound, this continues over a long period of time and the effect of eaten cannabis could last for over eight (8) hours!

It was a clever choice by the doctor to prescribe consumption via the gastrointestinal system instead of smoking these cannabis due to the above reasons especially for a patient, healthy individuals are more conditioned to withstand the adverse effects of overdosing on buds, more advantages also lies in consuming weed orally.

While consumed orally, consumers escapes the ‘dangers’ of the smokes emanating from a lot bud and also the devastating effects of secondary smoking, the lungs are protected as the liver takes full charges of every activity associated with getting the consumed compound to the nervous system, thus in summary, more refined and generalized effect is produced for a lesser side effect when the weed is eaten, raw or cooked.

smoking vs eating weed:which is healthier?

If you write STEM (Science, Technology, Engineering, and Mathematics) related posts, consider joining #steemSTEM on steemit chat or discord here. If you are from Nigeria, you may want to include the #stemng tag in your post. You can visit this blog by @stemng for more details. You can also check this blog post by @steemstem here and this guidelines here for help on how to be a member of @steemstem. Please also check this blog post from @steemstem on proper use of images devoid of copyright issues here.