I was randomly looking at my Steemd page when I saw this:

No problem right? I'll just log into Steemit and view the message!

Even after all this time, encrypted messages are still hidden on the Steemit interface.

No problem, I'll just log in to Steemit with my memo key. That's what I did last time to view encrypted messages. But wait, Steemit has since only allowed us to log in with our posting key, so that doesn't work anymore either.

No problem! I'll log into https://busy.org!
Surely they have a way to view encrypted messages!

At this point I am getting worried, because neither Steemit nor Busy has even given me any indication that I received an encrypted message in the first place. The only reason I even found out about it was from randomly looking at steemd.com operations.

So now I've moved on to Steempeak. No dice there!

Well, I didn't get any kind of indication that I received an encrypted message at SteemWorld, but I did find this when I directly clicked the operation: So, after being on Steem for a year, and having programming experience, it still took me like 10 minutes just to figure out how to view an encrypted message.

This is really distressing to me. We only have four keys, the memo is one of them, and we rarely ever use it. I feel like this key is vastly underutilized. Could you imagine being able to easily send encrypted messages on Facebook or other mainstream social media platforms? That kind of functionality is unheard of.

However, here at Steem, this functionality is simply part of the foundation. Honestly, a lot of the times it feels like we are children learning walk as we try to navigate this space. There is a lot of wasted potential here. Imagine all the things we could be doing with this level of encryption. For starters, where are the encrypted chat rooms? Why are we only sending encrypted messages 1 on 1 through the payment channels? Seems like it would be pretty easy to encrypt text and send it out as a custom JSON operation. This would make them not only free, but also costs 4 times less resource credits than a fund transfer.

Also, imagine encrypting your own message with your own public key. Now you are the only one who can decrypt that message. What would be the point of such a thing? Well, you can say something today that no one can read and prove to everyone tomorrow that you said that thing.

Let's say I was hosting a contest:

I'm thinking of a number between one and a hundred.
Whoever guesses right wins x Steem!

I could then encrypt a message like:
"The number I picked was ten (10)"
and encrypt it and post that to the blockchain.

After the contest was over I could reveal the original message:

Anyone could then use my public memo key to encrypt this message to see that it is in fact what I wrote at the beginning of the contest (because the encryption matches). This blind-bid functionality is one of many of the possible applications of the memo key; none of which we seem to be utilizing here.

I've been thinking about making games on the Steem blockchain.
Sometimes I run into the problem of:

Oh, that won't work because it requires privacy and this is a public blockchain.
The amount of work it would take to implement privacy here just isn't worth the effort.

However, now the more I think about it the answer has just been staring me in the face this whole time. Privacy can be achieved though memo key encryption because every account automatically has one by default. What an awesome platform this is! 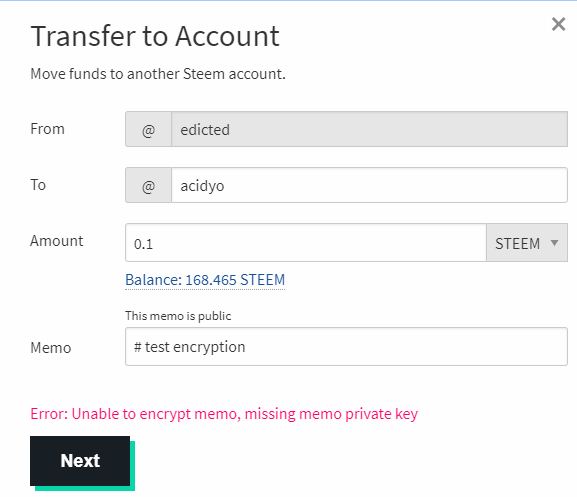 This was meant to be a quick reminder of how to encrypt messages on Steemit, but now I'm jumping down the rabbit hole again. Seriously what the fuck. You don't encrypt messages with a private key. How did that error message ever get written in the first place? Mind blown. I guess memo encryption is broken on Steemit.

So then I went to Busy.org: Then I went to Steempeak: I guess it's nice that at least one out of the four frontends I tried had the basic functionality that I was looking for. Kudos to @steemchiller for SteemWorld. This is a project that likely deserves a lot more support than it's getting.

what do you think about making a manual curation guild?

At it's core, the act of curation is a form of advertisement. We're essentially bringing content that we consider valuable to light for others to see. Personally, I think we are doing it all wrong. I think the forced curation tax should be abolished from the consensus layer completely. We need to find a better way to rate content than to simply assume the high payout posts are the ones that deserve to be viewed.

This is where resteems come in. I believe we need to monetize resteems. Take this post for example. I should be able to offer a deal to anyone willing to resteem this content:

All funds generated from your resteem will earn x% of the revenue generated.
(where x is a percentage determined by the author)

I think this would be a much smarter way to curate content intelligently.

In short, I am interested in improving curation.
I'm just not exactly sure how I would go about doing it.
There are so many projects I'd like to complete; it's hard to pick one and stick with it.

Memo Encryption is a very important utility whose potential hasn't even come close to being unlocked.

Curation and reputation are an important aspect we haven't figured out yet.

I'll continue to think of applications for the memo key over the coming weeks.