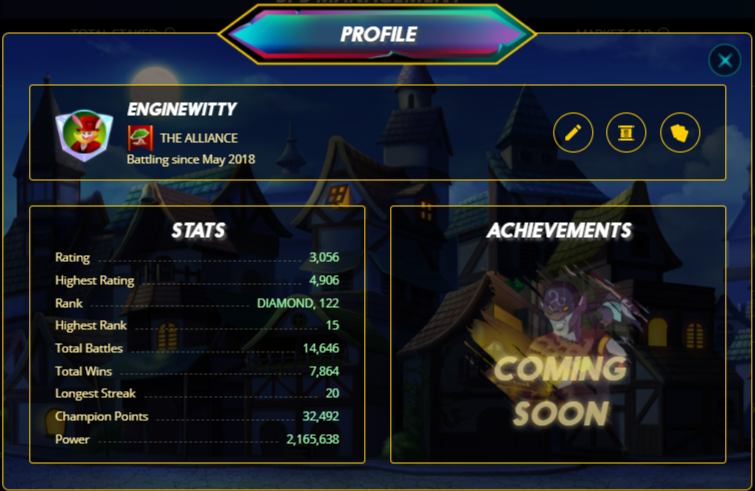 As I was looking at my profile and claiming my SPS, I remembered that I have been playing and investing in this game pretty much since it began. May of 2018. I would love to see some screenshots below of other people and their start dates. This game is something else and you are all a part of history, when did you join the war?

I was looking at this and curious what the 'Total Rating Movements' means. Is that how many points I moved (up and down) combined throughout the ranks for the season? I did have a positive record, so that has been consistent through all my seasons. (go me)

I had a lot of 'Dragon' quests this season. I'm not complaining, but that is why you see them being used so much this time. Love the dragons, they're my pets. I am even the Dragon Queen's father.

Outside of that crazy little chicken, the coupling of L-O-D and the Shadows made a good combo in any mana set. I am death. Hear me RAWR!

Looks like I dominated the Melee Mayhem. Why? Because Bruce Lee showed me how to play. He doesn't use magic. He sure as hell doesn't use a bow and arrow. I mean, Green Arrow bows down to Bruce and tells Chuck Norris to eat a dick.

I could have done much better with these, I did that thing where I forgot to play after I entered them. That is the main thing, making the time to play this game. I imagine if I played more, I would be in Champion 1. But, I did win a little bit!

I was not pleased here, only 2 gold foils total and not a single legendary. I'm sure I'm not the only one out here that is still screaming - make the potions worth something! I get way too many of those and they have no value. I can't even send them to anyone, which would at least be something. If they weren't dropped so often, I bet they would be more prized.

All in all, there isn't any other game out there that 'pays you back' like this one. Sure I love to hate the fucking thing, and it gets frustrating, but it also very satisfying to beat certain players, win things and now? We have ownership in this bitch! I have invested in all the kickstarters and have been here forever. I also now have a small stack of SPS staked and am excited to see how that starts working for us tomorrow. Game on my humans.

because I can
So Can WE
Vote Witty

Is Voting #WITNESSES difficult?
Let me do it for you!
Set Witty as your --->PROXY VOTER!<---