More players are buying into Splinterlands than ever before 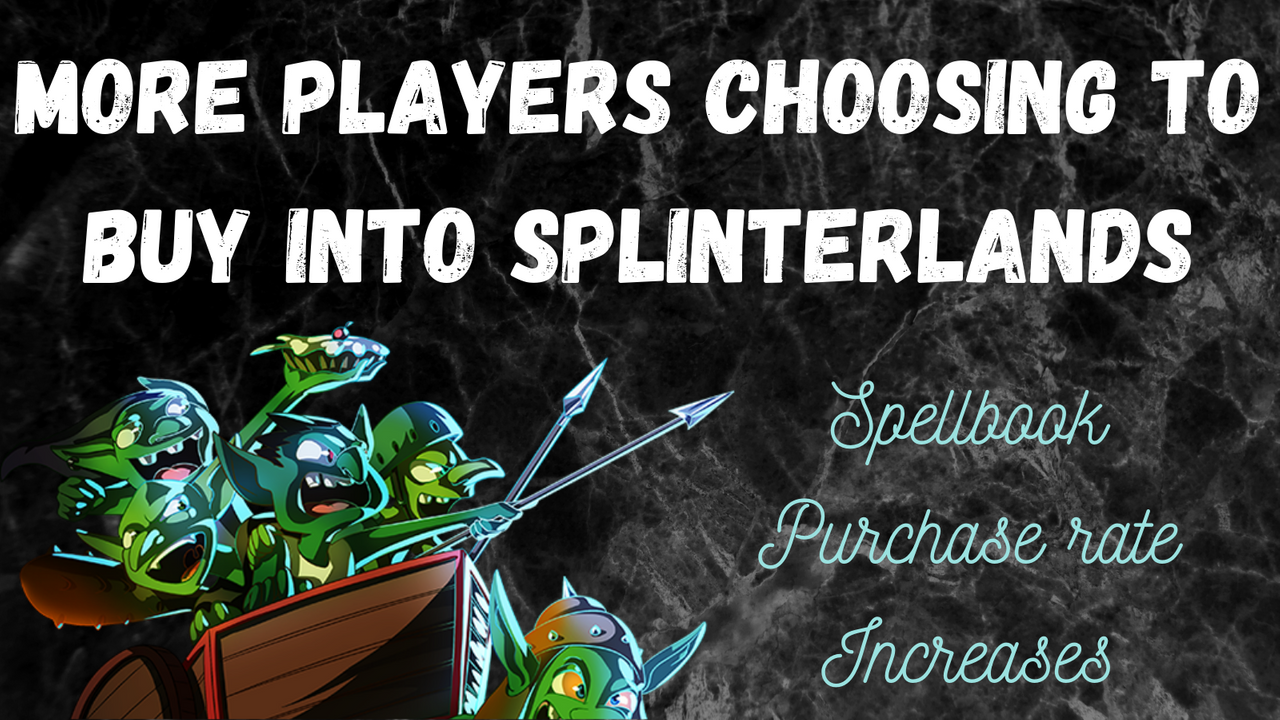 Once a new player creates an account, they can begin to play for free using the starter pack provided for them by Splinterlands, and the game foots the bill for all of the transactions that their playing puts onto the Hive Blockchain.

To buy-in or not to buy-in

Once they have created an account and played around with the game a little, the new player has 3 choices:

The daily Spellbooks purchases are never as high as the daily new account sign-ups. Part of this discrepancy comes from the fact that some percentage of new account creators are always choosing to leave the game without buying in. The other important factor is that those who do buy in do not always do so immediately. A new player might try the game out for a few days before deciding it's worth it to purchase the Spellbook.

Because of the upwards tradictory of the new account numbers, even a 100% buy in rate would appear to be less than that if all purchases were delayed by a few days. To demonstrate, if we had 10,000 sign-ups on Monday that all bought Spellbooks on Wednesday, the Wednesday sign-up total of 12,000 will still make the Spellbook purchase rate appear to be less than 100%

So, how many are buying in?

Because of the reasons explained above (particular the buy-in delay), we would never expect to see a 100% buy-in rate. However, in general, higher rates are better, as only Spellbooks holders can acquire Splinterlands assets, enter tournaments, earn rewards, or in general participate in the Splinterlands community. So, although there is no "magic number," we like to see buy-in rates increasing. There are multiple ways to measure how many new players are actually buying Spellbooks, depending on how long of a timeline you use.

The first such measure is to look at the daily buy-in rate, which means dividing the daily Spellbook purchase rate by the daily new user account creation rate. This type of metric offers the most real-time feedback, and is the most susceptible to the purchase delay effect, as indicated above. Check out this graph, which shows the Daily Spellbook buy-in rates for all of 2021: 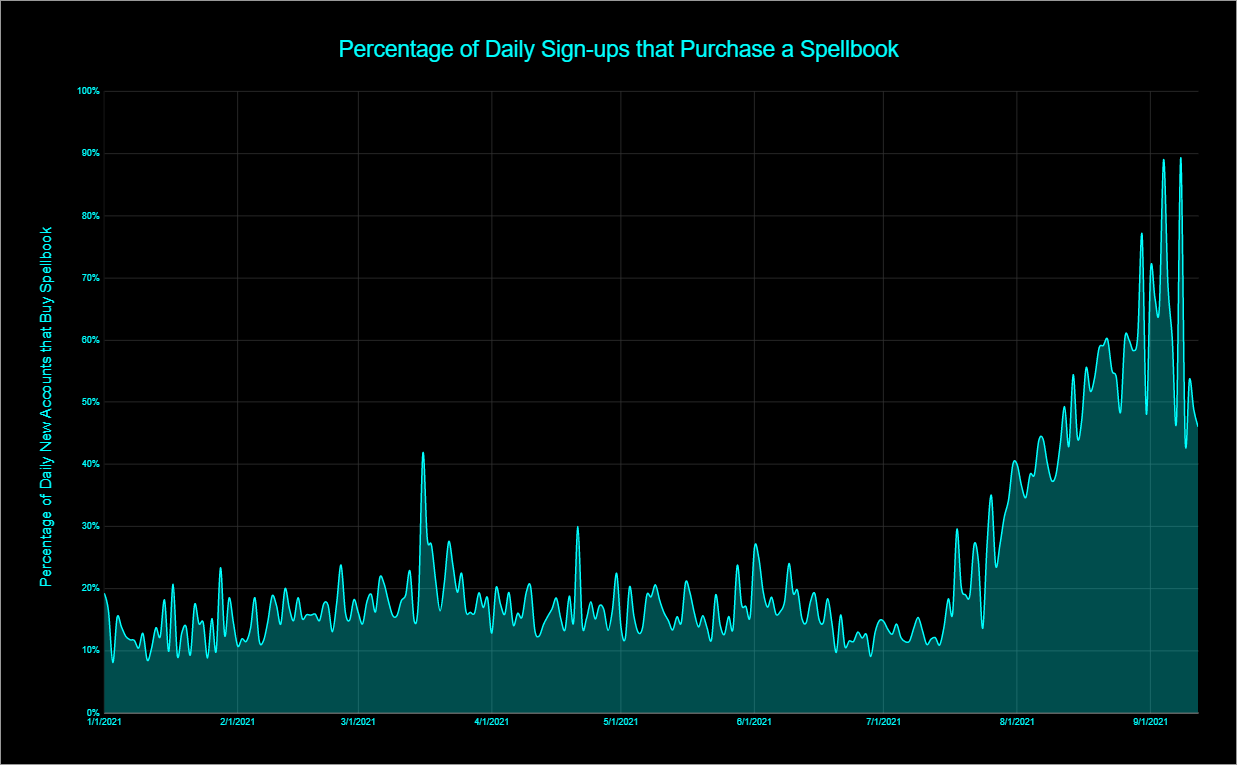 There is a lot of fluctuation between individual days, of course, but in general we can see several months of relatively stable numbers hovering between 10% and 30%. Then there was a dip around July, and since then the rate has continued to climb, hitting a few outrageous highs of nearly 90% but averaging around 40-50% for the past month. 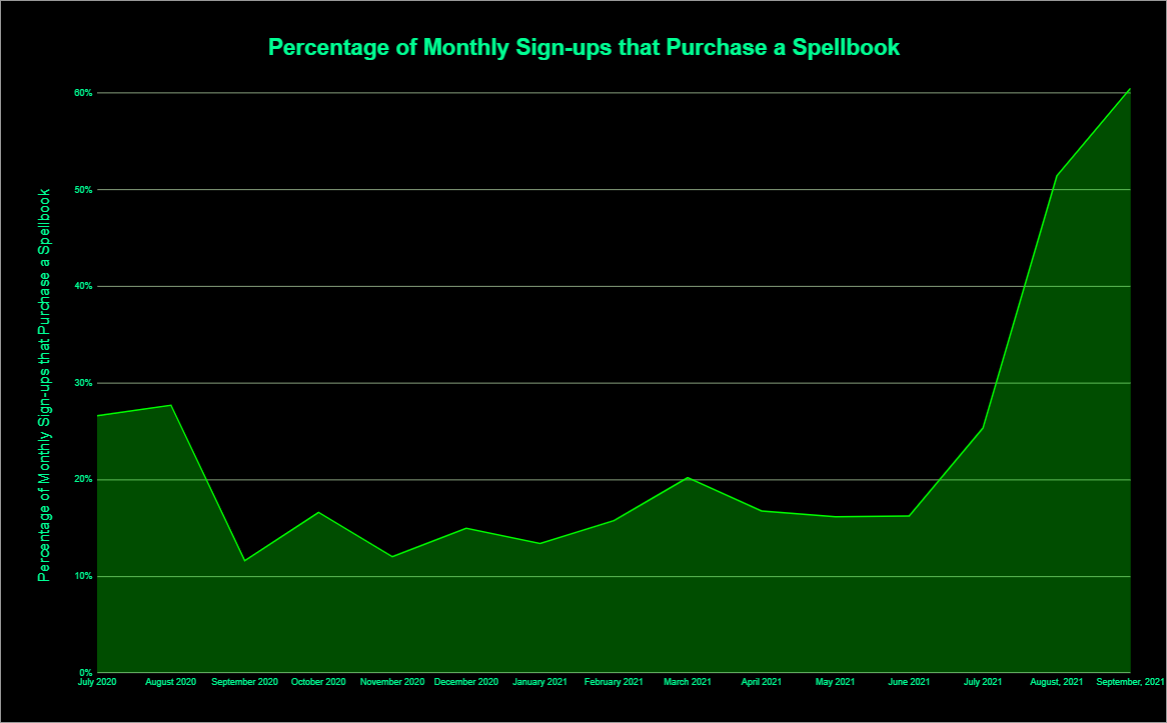 Keep in mind, this graph covers twice as much time as the daily graph above, as this one begins in July 2020 and covers 14 and a half months total. Still, we see similar trends in 2021's numbers, with some decrease reflected in the six months before that. The recent increase in the buy-in rate this past month is also reflected. By using monthly numbers instead of daily numbers, we can counter-act the effect of delayed Spellbook purchasing, to some degree.

The last method for examining the buy-in rate that I'd like to share is a total, or cumulative, buy in rate. At any given time we can see how many total accounts have been created, and how many total Spellbooks have been purchased over time. By dividing the second number by the first, get this graph. Using cumulative numbers allows us to see less of the day-to-day or even the month-to-month ups and downs. Instead, we see the overall trends. Check out this graph, which covers the same 14.5 month timeframe, using cumulative numbers: 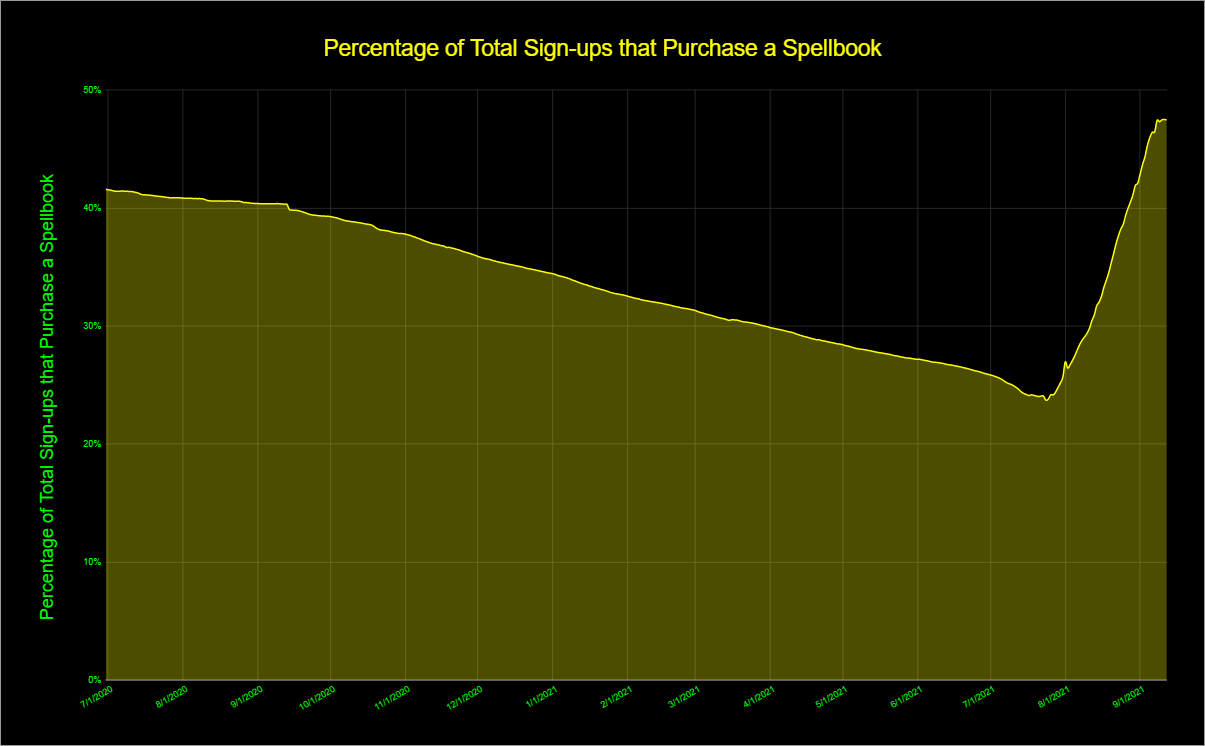 This graph is perhaps more interesting, as it starts with a high purchase rate that comes from earlier days, when fewer players joined the game, but more of them stayed. This graph shows a slow and steady decline from about a 40% buy-in rate last summer to approximately 25% this summer, and then a steep incline in the last month and a half to the nearly 50% we see now. A cumulative model does the most to counter-act the delayed purchase effect. It can tell us less about any one moment in time, as new trends are not reflected quickly, but we can see more of the overall momentum.

What affects these numbers?

Lots of things can affect the Spellbook buy-in rate. When the game is suddenly exposed to a new community (perhaps in a new country) and a large number of people learn about Splinterlands in a short period of time, this can drive the rate down, as many new people come to check the game out without a fully formed idea of what we are about here, and some of them decide that we are not for them. Likewise, being introduced to new communities that are already familiar with similar games or technologies and already understand the value we bring may boost the rates, as those coming into the game already plan on staying. Bot account would likely boost these numbers, as there is little point in creating a bot account without a Spellbook, and prolonged game issues (such as the entire game being closed for maintenance) could decrease these numbers, as new players who cannot play see no reason to stay. Newly released Splinterlands features, such as land, Guilds, and the SPS governance token, may also entice new players to stick around, and increase Spellbook purchase rates.

What does this mean?

So, we understand that, in contrast to the vast majority of free-to-play games available (which have a buy-in rate of around 1-2%), Splinterlands has always had a strong purchase rate, around 15-30% this past year. Additionally, we know that these numbers have been steadily increasing since halfway through July, and that we now sit somewhere around 60%. Halfway through July is also when the numbers coming into Splinterlands (both accounts created and Spellbooks purchased) began to drastically swell, increasing more than twenty fold in that month alone. So, perhaps there is a direct correlation, and the faster we are gaining new players, the more of those new accounts will want to stay. The number of players itself may serve as an attraction to new players as well. Only time will tell if this new trend holds.

So far this month, the average number of new Spellbooks purchased is over 10,000 every day, and that's good news any way you slice it. We were happy with our old buy-in rates, and we are ecstatic with this new tern of events.

There is no way that 60% of new users would be sticking around to see Splinterlands grow if it wasn't for our amazing community here. I say it every time, but that's because I mean it every time. With more new community members joining us every month than we had in total just two months ago, none of this works without your cooperation and enthusiastic support. Thank you for making this game amazing, for continually working to improve our community, and for serving as such a knowledgeable and helpful network to onboard new players. You guys are the best.