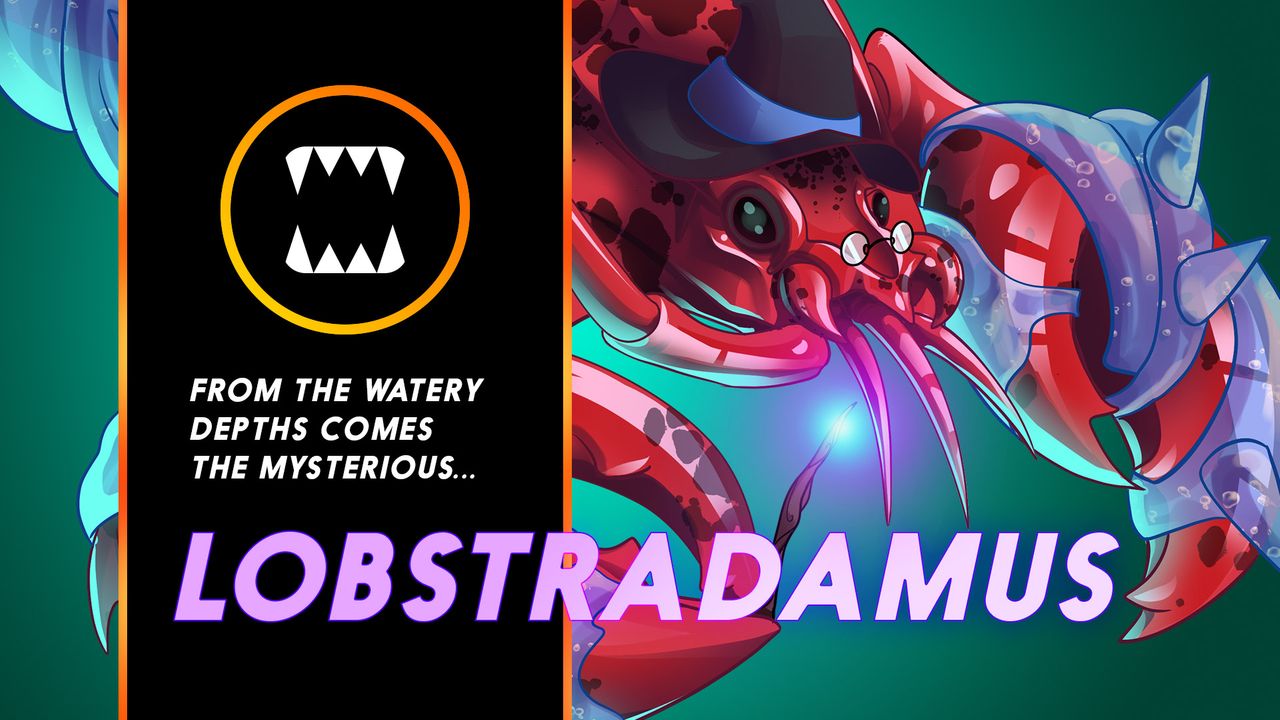 Believe it or not, it's already time for another Untamed airdrop card to be released! It has been a little less than a month since the last one - the Goblin Firemage - was revealed and already close to another 100k packs have been sold. At this rate we may not have much longer to go before the Untamed edition sells out entirely!

In any case, we are excited to reveal a super fun and interesting new Epic Water Splinter Monster - Lobstradamus! It should go without saying that the art and lore teams had a lot of fun with this one, and we hope that you all enjoy it as well!

Even though the card is being revealed now, it won’t be “unlocked” and available in the game until after the remaining ~12,000 packs are sold. Lobstradamus will be the 15th Epic card to be available in Untamed edition booster packs, so the chances of receiving the card in the airdrop (as well as in booster packs going forward, without the use of potions) will be approximately 1.333% or 1 in every 75 packs on average, with an average of 1 in 50 of them (or 2%) being Gold Foil.

Additionally, players will be GUARANTEED to receive at least one Lobstradamus card for every 75 Untamed edition booster packs they have purchased.

Show Me the Stats!

Lobstradamus is a tough Magic-attack tank monster with high health and the Shield ability reducing the damage he takes from Melee and Ranged attacks starting at level 1! He also gains the Magic Reflect ability and the Thorns ability at higher levels allowing him to punish his attackers.

Get In On the Airdrop!

At the time of writing there are just over 12,000 Untamed booster packs available for purchase that will be eligible for the Lobstradamus airdrop. Of course, all Untamed booster packs purchased to date - either through the site or through the crowdfunding campaign - are also eligible, and after the airdrop the card will be available to be found in all packs opened going forward.

These packs will also be eligible for both of the remaining new Untamed card airdrops that will happen every time another set of 100,000 packs are sold.

We also want to remind everyone that it is still often possible to get a discount on purchasing booster packs by getting Dark Energy Crystal (DEC) tokens on secondary markets. DEC currently trades on the following exchanges:

Beneath the waves north of ΛZMΛRÉ’s Dark Water, there is a massive reef that hangs over the edge of the abyss. The reef is called Vedric’s Lean, named for the way it seems to be poised for evermore on the edge of a destructive fall. The Lean is home to multitudes of creatures; some are hunters and others are hunted. Within the reef there are many caves, some of which contain incredibly large open spaces. It is in one of these caves that Lobstradamus, great champion of the Nephromagus, founded his underwater school, the Lobstermage Academy. With a curriculum full of divination and prescience education, the Academy is the most prestigious of the underwater schools, and it will undoubtedly play a large part in the looming chaos wars that Lobstradamus can sense somewhere beyond the Outer Ocean.

How did the lone Splinterlands survivor of the Nephromagus find himself the administrator of a school of magic? Years ago there was a great moment of peril that surrounded the Water Splinter, and none of its inhabitants knew how close they came to extinction. At that time the Nephromagus were a proud and prolific race of giant lobsters who made their homes in the midshallows and among the reefs all around ΛZMΛRÉ. They were skilled in many magical disciplines, but foremost among those were their talents for predicting future events. The champion Lobstradamus was the greatest predictor among them. It is through his magic that the Nephromagus knew what was coming, and they were the Splinterlands’ only hope against an unseen onslaught that would consume the entire world.

The enemy was a collective deep water force of doom known as leechwash. The massive cloud of dire leeches thought and moved as one, creeping through the Outer Ocean. When it found land, leechwash would approach from all sides and emerge from the water to quickly engulf and absorb every drop of life energy from entire continents. While in deep meditation one day in his ancestors’ temple of stone, Lobstradamus saw them coming and in a moment outside of time, he knew what had to be done.

In a deep prescient trance, Lobstradamus reached out with his powerful mind to every coral polyp in the land. After making a connection with these creatures that comprised the very ground on which the Nephromagus lived, he expressed to the coral consciousness the coming danger and implored their help. Without hesitation, the coral began to move as a massive unit, uprooting itself from the ocean floor and breaking into eight equal pieces.

The beautiful world of the Nephromagus was torn apart that day and the geography of ΛZMΛRÉ was changed forever, but the magic of Lobstradamus had worked. He alone was left behind as the coral homes of his people floated off into the wild Outer Ocean in eight large pieces. The attacking leechwash, having never seen moving reefs before, did not know which piece of broken reef to engulf. It divided its force, and eight smaller leech clouds followed eight sailing masses of coral into the outers, leaving the Splinterlands in safety.

Lobstradamus was alone but victorious. His world was safe, but he had made his people into castaways and would never see them again. He emerged from the ancestral temple beneath ΛZMΛRÉ to the Inner Sea and found a reef that reminded him of his lost home. In the years that followed, Lobstradamus built and opened a school of divination in Vedric’s Lean, training the most gifted Splinterlands minds to see what was coming before tragedy strikes. Now as he approaches the age of 100, Lobstradamus hopes that he has done enough in six decades as headmaster to prepare the diviners of the Splinterlands for the fight of their lives.