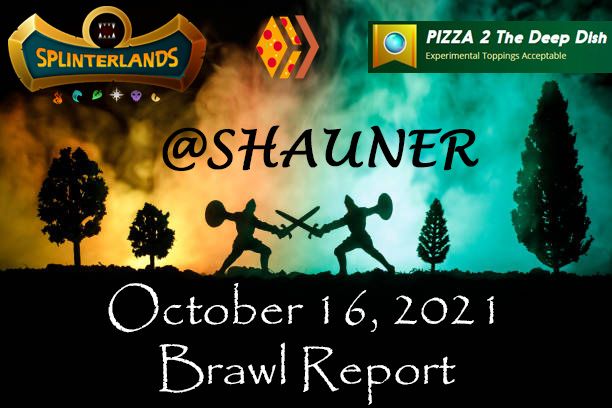 Welcome to my ninth #BrawlReport and my seventh brawl in the @hive.pizza PIZZA 2 The Deep Dish guild.

I entered Fray #7 for this brawl again, which is a bronze fray, but only allows Untamed edition cards to be used for battle.

There was an extra opponent in the 7th Fray this time so I faced 6 opponents and my record was 4W-2L. Unfortunately, that extra battle didn't result in an extra win and I remain stuck at 4 wins per brawl for the last few times. 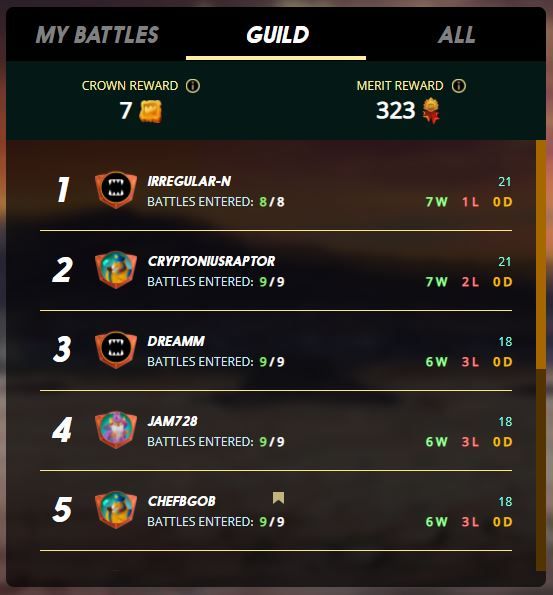 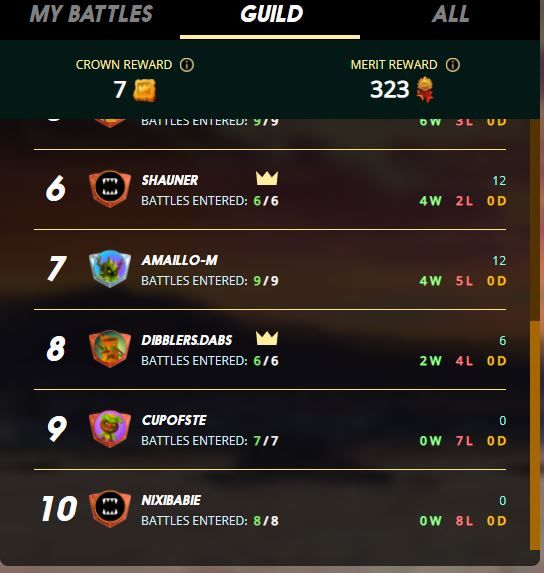 This is the first time in a while that I've finished in the bottom half of our guild, but it's only because our team did so well in this brawl! Seven out of 10 won at least 4 battles! Congrats to @irregular-n for winning the most battles and having the highest win percentage in this brawl! 7 wins and a win percent of 87.5%.

We dropped one place and finished in 4th for this brawl with a total of 42 wins, which is 15 more than last time! This resulted in 7 crowns and 323 merits being rewarded. 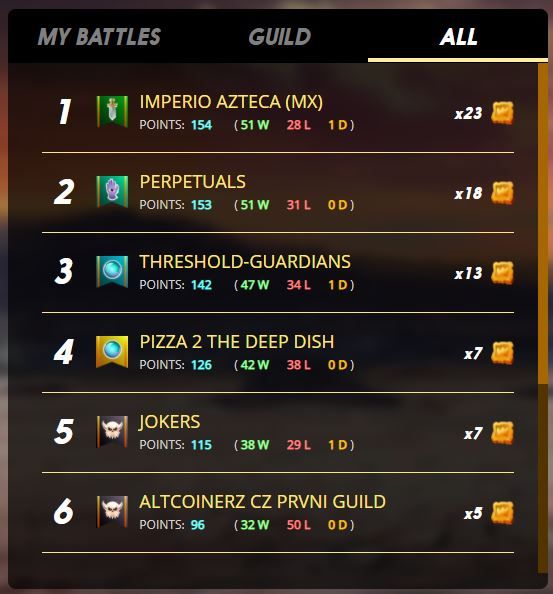 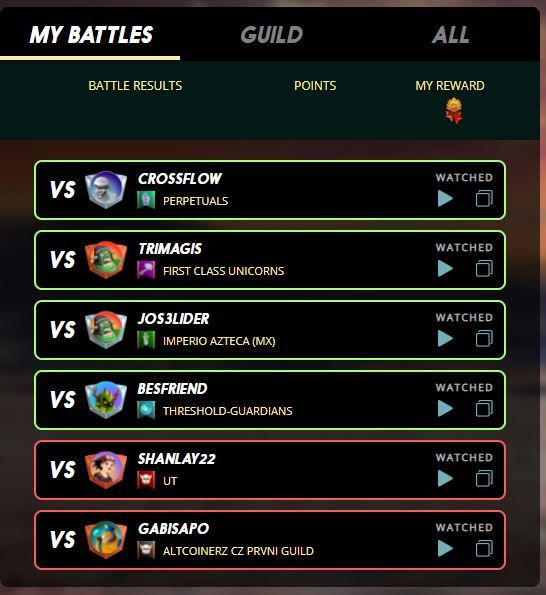 This battle was an easy decision to use the Llama/Kron combo as the Kron can regenerate health each turn to counteract the poison effect. My opponent didn't stand a chance with no health regeneration capabilities at all. 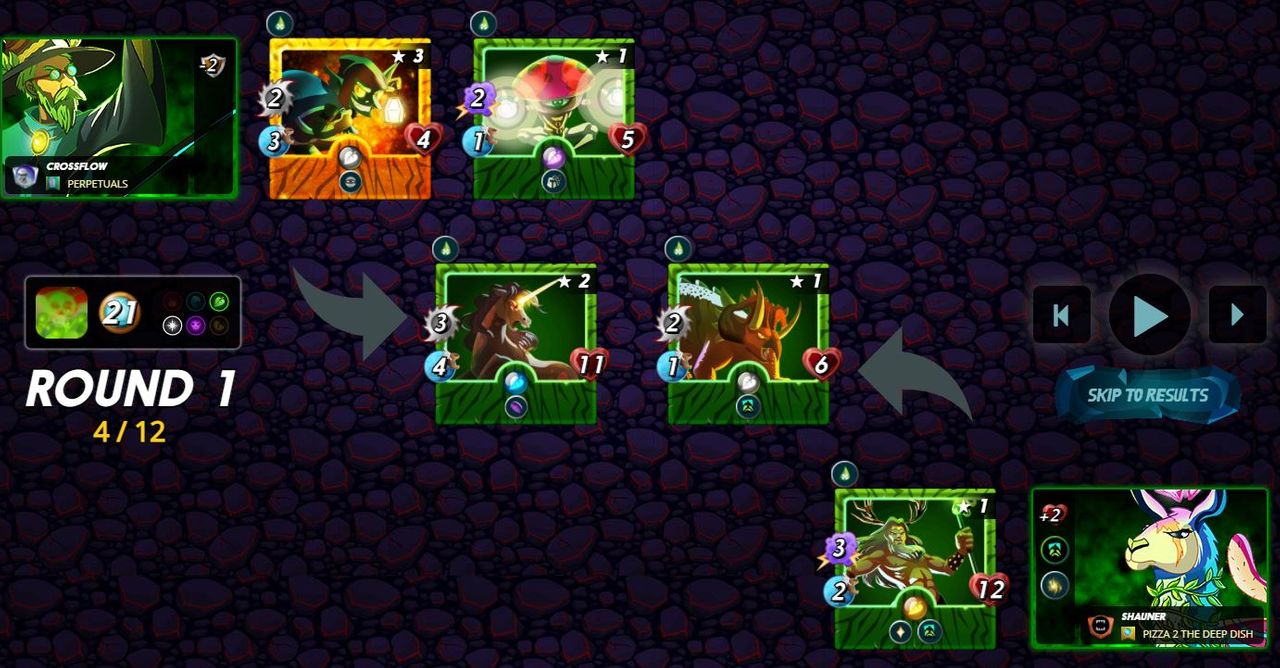 Close Range: Ranged attacks may be used in the first position in battles.

Despite this battle having the Close Range benefit, I decided to prepare for a magic battle with my opponent. Close Range is great and all, but it wouldn't do anything for me if my opponent just puts up some extra shields, whereas magic attacks skip over shields entirely.

By using a monster with Sneak ability, I was able to quickly eliminate the second monster in my opponent's lineup. Then it was simply a matter of time to chip away at their tank's 8 health.

Armored Up: All monsters have 2 armor in addition to their normal armor stat.
Earthquake: Non-flying monsters take 2 melee damage at the end of each round.

This was another no-brainer battle for the Llama/Kron I rent for each of these Untamed brawls that I enter. The Kron will counteract the earthquake effect and hopefully take out my opponent's flying monsters before they are able to wear him down.

Once Kron was in the tank position and got the boost for being the last monster left, it was just a matter of cleaning the floor with my opponent. 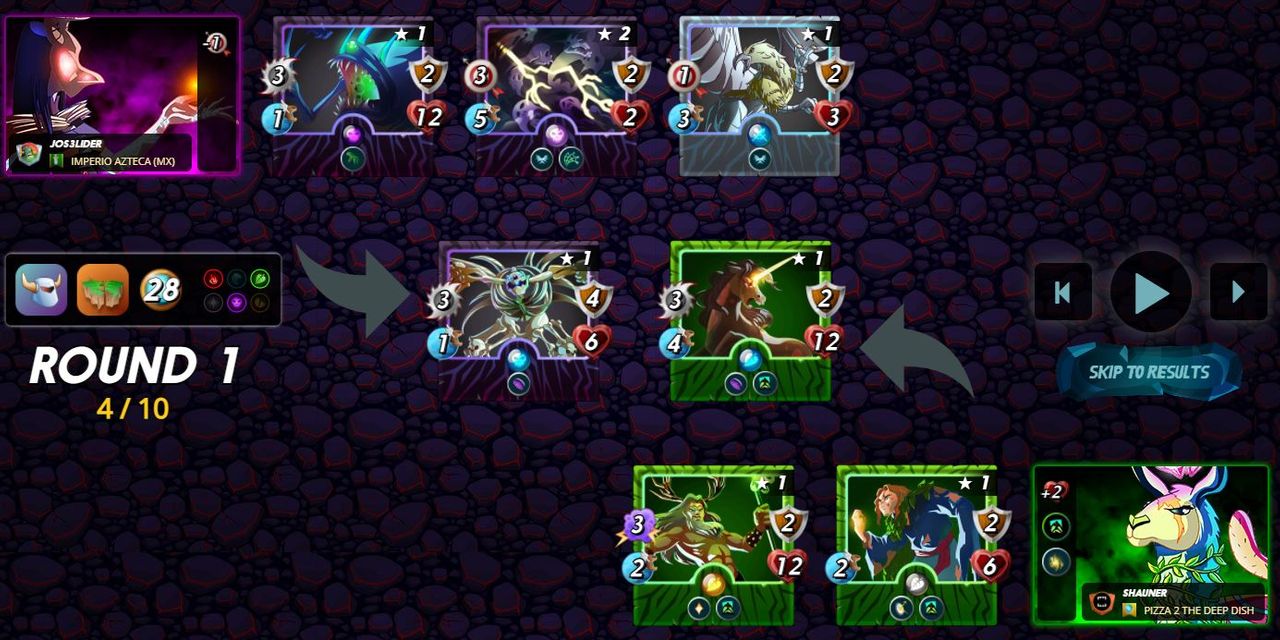 Explosive Weaponry: All monsters have the blast ability.
Equalizer: The initial health of all monsters is equal to that of the monster on either team with the highest base health.

The blast ability is quite fun to have and I combined it with the Llama/Kron as well as a couple of monsters with the Snipe ability. Snipe is a great strategy to use in combination with blast because they are able to inflict damage on three opponents with each turn. The blast ability spreads damage to the monster(s) on either side of the initially attacked one.

By having two Snipe monsters in my lineup, instead of doing 3 damage per turn, they are now doing 7 damage across three monsters. This strategy helped wear down my opponent's back row and left Kron to clean up the remaining monsters.

Another variable in play here was speed. My tank, Unicorn Mustang, was very effective at having opponents miss in their attacks against it. This provided a lot of extra opportunities for my monsters to keep fighting while my opponent kept missing.

Healed Out: All healing abilities are removed from monsters and summoners.

I was expecting my opponent to mount a magic attack on me and they didn't This left me pretty much screwed from the start on this one as my Failed Summoner with his magic reflect ability was a waste. That combined with the lack of regeneration for Kron and the Unicorn Mustang as my opponent's tank, meant I was in for an uphill battle.

Ultimately, this fight came down to the very last card for each of us and I got beat out by one health point. This one was a bummer.

I really struggled with this lineup. I found myself to have a lack of good Untamed low mana cards to put together something competitive. I really wish I had a buffer card between my tank and the range monsters, but I didn't.

I knew heading into this one that I didn't stand a chance and if I'd had another minute to set my lineup I may have found something better able to succeed under these battle conditions. This is one of those times where knowing your deck and a bunch of different strategies comes in handy when you need to submit your cards so fast.

I did very well in the first five brawls, and nearly won the 5th one. However, my lineup in the sixth brawl just flat out sucked and I should have done better there.

While the ending was a bit disappointing, we did earn enough Merits that I can purchase my first Gladius Case! I'll have a post coming soon with the opening of that case. I'm hopeful that those Gladius cards will really come in handy for my brawls, although I'm not sure if they can be used in the Untamed frays or not and that seems to be where I've found my home to be.

If you haven't seen the news yet, check out the new 1UP project by @flauwy. This looks like a great new gaming project for Play2Earn blockchain games like Splinterlands! I seem to be getting more than 100 OneUp tokens on each of these posts, so the earnings will add up over time!

I'll be writing up a post about 1UP in the coming week as I really think this is a great opportunity to stake these tokens early and build up some great curation rewards in addition to SPT and Hive.

@kennysgaminglife has spearheaded the #BrawlReport project as a way to get PIZZA guild members more engaged in the @Splinterlands community. Here's what he had to say:

My End of Season Rewards Post (Silver I Finish): https://www.splintertalk.io/@shauner/silver-i-end-of-season