Hello there, battle mania. Welcome back to my Splinterlands Card Battle article.
In this post, I'll tell you about my battle with Dragon Spirit. Dragon Cards is the subject of this week's Battle Challenge of Splinterlands. If you have a dragon card, you may also participate in this weekly challenge by clicking on this link: By combining 46 cards of a kind, you may reach the maximum level for this card, which is level 6. This card's primary ability is flight. When you combine these ten types of cards, an extra ability, immunity, will arise. If you have 32 of these cards, you can combine them to become a level 5 card and get an extra power called Redemption.

What is the aim of making this card level 6? The answer is that you will receive a maximum speed point of six. The enemy's strike will be simple to miss with these 6 points. Like in my previous battle, I can make living lava a loser under summoner Yodin Zaku by using only level one of this card. Do you not believe it? Let's see what more this post has to offer.

LINK BATTLE
This fight requires 20 mana points and follows the rule: healed out. Monsters and Summoners no longer have any healing powers. Except for aquatic monsters, all types of monsters can be used in this battle.

The battle begins with all of the Monsters in the YODIN ZAKU Line receiving Bonus Blast. And because I'm using UNDEAD PRIEST, all enemy monsters have their health reduced by one point.

TWISTED JESTER promptly fired a snipe strike at the GOBLIN FIREBALLER in the opening round, knocking him off the battlefield. The UNDEAD BADGER then attacks the FIRE BETTLE. However, it just decreases one health point. The UNDEAD PRIEST was attacked by FIRE BETTLE. The assault, however, did not diminish the UNDEAD PRIEST's health points because of the Summoner's Bonus Shield.
Because of YODIN ZAKU's Blast bonus, DRAGON SPIRIT and UNDEAD SPIRIT both get one blast attack point.
The DRAGON SPIRIT is attacked by LIVING LAVA, but the strike misses. The TWISTED JESTER attacked the FIRE BETTLE in the second round, reducing its health by two points. The task is accomplished when UNDEAD BADGER defeats the FIRE BETTLE, which has just one health point. With the removal of FIRE BETTLE, the enemy line is down to one card. LIVING LAVA hits once more, but this time it misses DRAGON SPIRIT. So far, it's been missed twice. What went wrong? The LIVING LAVA attacks again in round three. And then miss again. Wow Lucky Me. TWISTED JESTER took advantage of the situation to assault LIVING LAVA. Because of the Shield boost, the UNDEAD BADGER cannot lower the health points of LIVING LAVA. 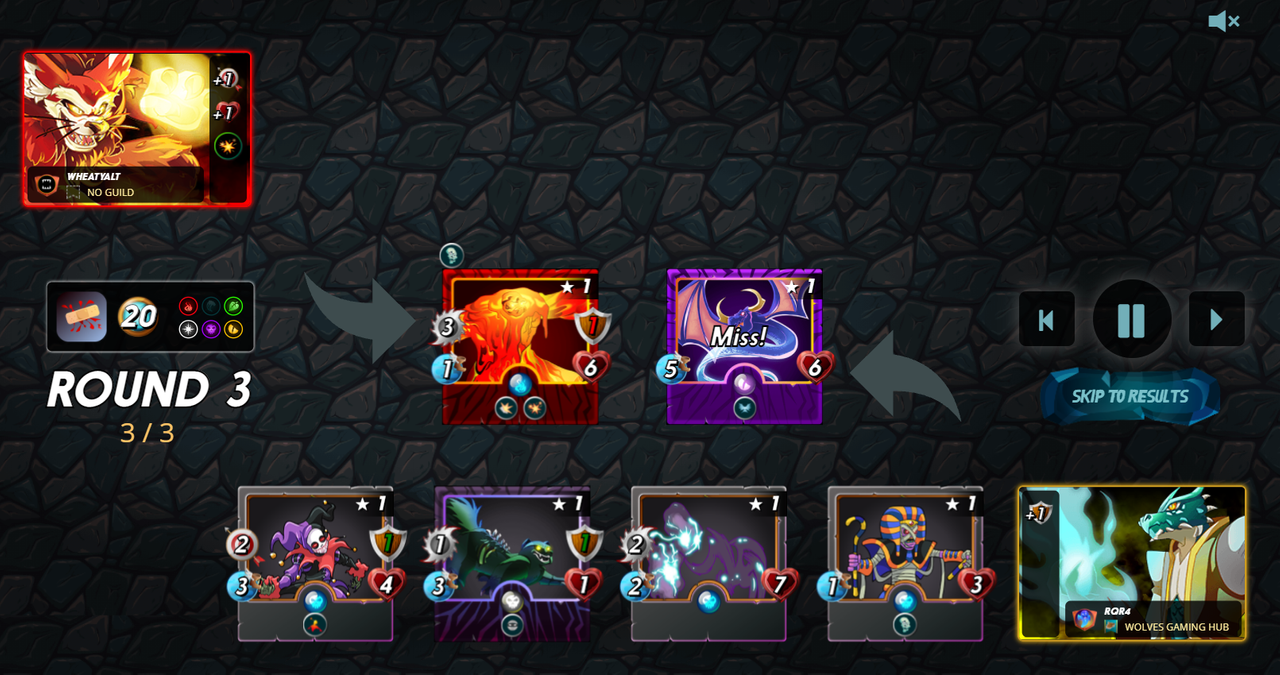 Back Again LIVING LAVA misses in the fourth round. TWISTED JESTER is once again depleting LIVING LAVA's health points.

LIVING LAVA missed again in the fifth round. LIVING LAVA missed again in the seventh round.

The eighth round was also a miss. LIVING LAVA's strike has failed for the umpteenth time.

The TWISTED JESTER was attacking LIVING LAVA in the Ninth Round, and LIVING LAVA was dying. Because this fight only demands 20 mana points, the monsters included in the battle line must be properly packed. I like to utilize creatures with low mana costs. Because of its speed, DRAGON SPIRIT might force the opponent's strike to miss. I pick the summoner who grants one shield point.

If the front row can survive the opponent's onslaught, the rear row must be able to deliver a powerful strike and have a high-speed point. I chose the TWISTED JESTER, who also has the Snipe ability. Whereas HAUNTED SPIRIT serves as a backup to resist front-row strikes if the DRAGON SPIRIT fails to guard.

The enemy summons YODIN ZAKU, a summoner with blast abilities and additional ranged attack points. The adversary's approach is also similar, with tanks in the front and long-range assault backups in the back. On the other hand, the opposing rearguard monsters didn't have a lot of speed points. As a result, it is the first to be attacked.

During this battle, the DRAGON SPIRIT's ability to avoid attacks surprised me. It turns out that a 5 point speed boost can render creatures with low-speed points immobile. The ability to fly is this monster's one-of-a-kind talent, which increases the miss percentage.

If all of the LIVING LAVA assaults succeed, I will undoubtedly be defeated. Because the opposing summoner is extremely powerful and has blast ability. DRAGON SPIRIT is a bizarre card with amazing powers. If you have this card, make the most of it by upgrading it to the highest level.

DID MY STRATEGY WORK?
My plan worked, as seen by the video above. But, in my perspective, I won since I was lucky enough to get a 100 percent miss. Do you agree with me?

Okay all, that's all I can share about the fight I played using DRAGON SPIRIT. Thanks for your support. See you in the next post. I hope I can contribute a lot to this community.

🍃 Much appreciated. Terima kasih banyak. Muchas gracias. 🍃
All of the photos and some text about Splinterlands in this post come from Splinterlands.com
You can use the blog divider in this article if you like it.
Talk about Splinterlands,
If you haven't tried out this fantastic game called Splinterlands yet,
I invite you to Join.
It's free, but you'll need to invest in a beginning deck or buy gaming cards to gain real assets like cards and tokens.

Do you want to boost your earnings? For daily SPT payments, try delegating your SPT to @monster-curator. Check out their how-to post for more information.