As you may have heard, Reddit recently announced they've chosen Arbitrum as their scaling solution for their token system that currently only exist on a couple subreddits. Moons for r/cryptocurrencies and Bricks for the Fortnite subreddit. 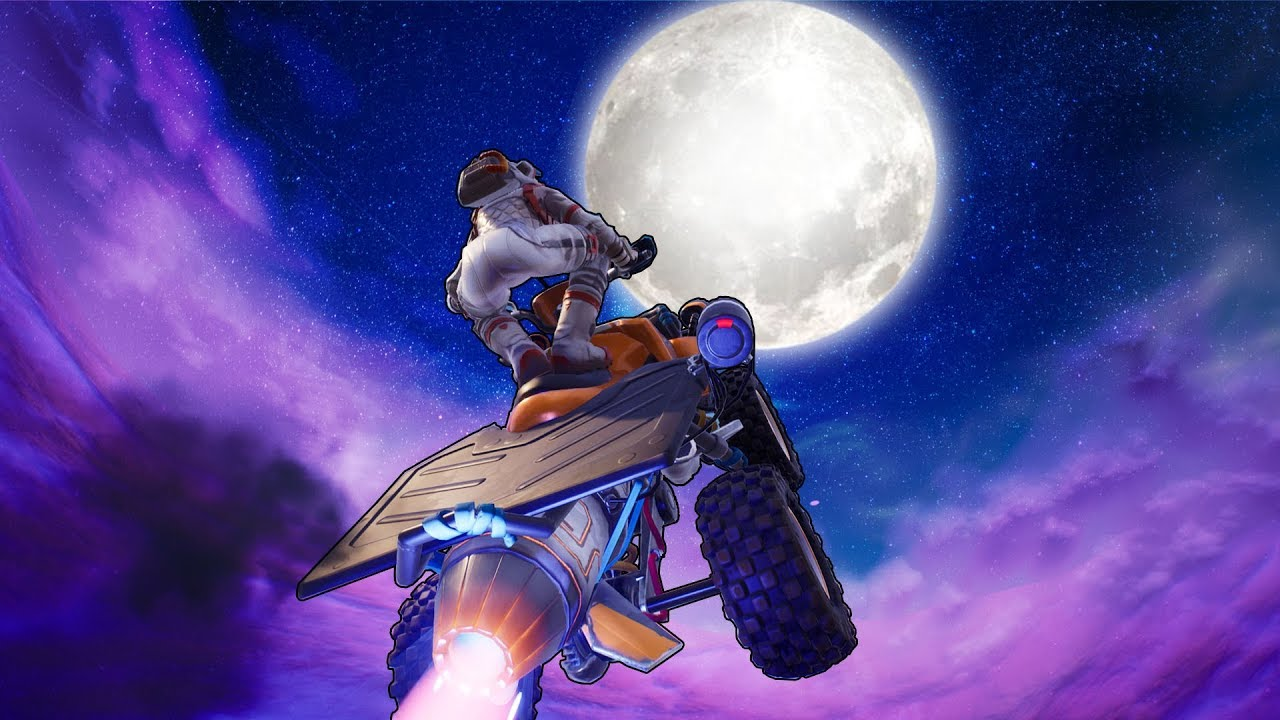 As someone who has used Reddit quite a lot in the past and of course also Hive I wanted to chime in on some issues that may arise and comparisons between the two. Don't get me wrong, I'm quite neutral on Reddit adopting blockchain tech and tokenizing their subreddits. People may think "oh that's it, Hive is done for" because of this but honestly if it introduces more people to Ethereum it will automatically introduce people to Hive and they'll be able to make their own decision.

A quick history of Moons, they were distributed about a year ago, 50 million at launch airdropped to everyone who has earned post or comment karma on r/cryptocurrencies (I received 5k but haven't been that active there) with 5 million going out every month and that 5 mil decreasing by 2.5% each "cycle" whatever that means from the announcement post but eventually it will max out at 250 million tokens as shown in the graph below:

You're not going to be able to see the text on dark mode, but it looks like it'll be close to max cap by 2035. How that makes any sense is beyond me, as in, why would people stop earning Moons by then, what do people earn afterward? I guess they'll have enough time to figure that out.

Reddit karma provides a basis for measuring people’s contribution, but the final decision is up to the community.

This is also pretty vague, how is the community supposed to affect it in other ways than with the up and downvote button? I'm guessing they're talking about bans here which will be a ton of fun to find out what that entails.

Alright so let's quickly look at some issues with the very little that's been announced so far.

Reddit is a private company with a private database where there's admins, moderators and users. You hop onto the r/cryptocurrency subreddit, you read the rules and then share something and hit post. Your post goes out and all you gotta do now is wait and see what happens.

If you've ever used Reddit you'll know it's quite "hit and miss", you either post something at the wrong time or it has been reposted already without you really being able to figure out beforehand cause their search function is famously bad, or someone just downvotes you for no apparent reason because most downvoters don't care about the Reddiquette of how the voting system should be used. Most of the time you'll be downvoted.

Now if you're on Hive and have received downvotes, while I understand it may be frustrating and even though most of them may land on content they deem to be overrewarded, I can tell you that getting downvoted to 0 without even having received a lot of upvotes to begin with can be quite frustrating. There is no name attached to them, you can't go strike a conversation and ask them why they downvoted your post nor can you repost it cause most automods are going to flag you as a spammer and quite literally shadowban you from the subreddit. I'm quite sure that shadowbanning was something that got popular starting on Reddit. You could see your own post, wonder why no one was voting it up but at the same time it wasn't even getting downvoted either only to open up the subreddit's "new" section in an incognito window to notice it wasn't showing up at all to everyone else. I don't think I need to tell you the differences between Reddit and Hive in that regard. Even communities that are now able to mute on Hive will still show your post albeit it'll need an extra click for people to view it.

Reddit is big, if you think Steem was big a few years ago during the pump when bid bots were King on the chain, Reddit is like the sun where Steem was an Orange in comparison. What I mean by this is that with that many daily unique users and visitors there are a lot of eyeballs on Reddit, this of course raises the interest of advertisers and now also any person with a referral link.

Have you ever seen those Twitter posts from random people who happen to blow up for one reason or another and they'll add a reply to their tweet with "omg this blew up so please follow me and check out my website/store/something in this link". Yes, people will take any attention they can get to monetize it in one way or another. Reddit makes this possible from the get go and afterwards too. A lot of the trending content on Reddit may be advertisement without us knowing, the best advertisers are those who show you something and you may not even understand what it is they're trying to sell you as it may not be the main attraction of the content or share. Some are less indirect about it and many moderators in many subreddits add the "advertisement" flair on their posts after a while.

Naturally with a private database and money to be made advertising certain products or bringing attention to certain things, there's ways to make money off of that attention. Welcome to the Reddit dark market bid bots. 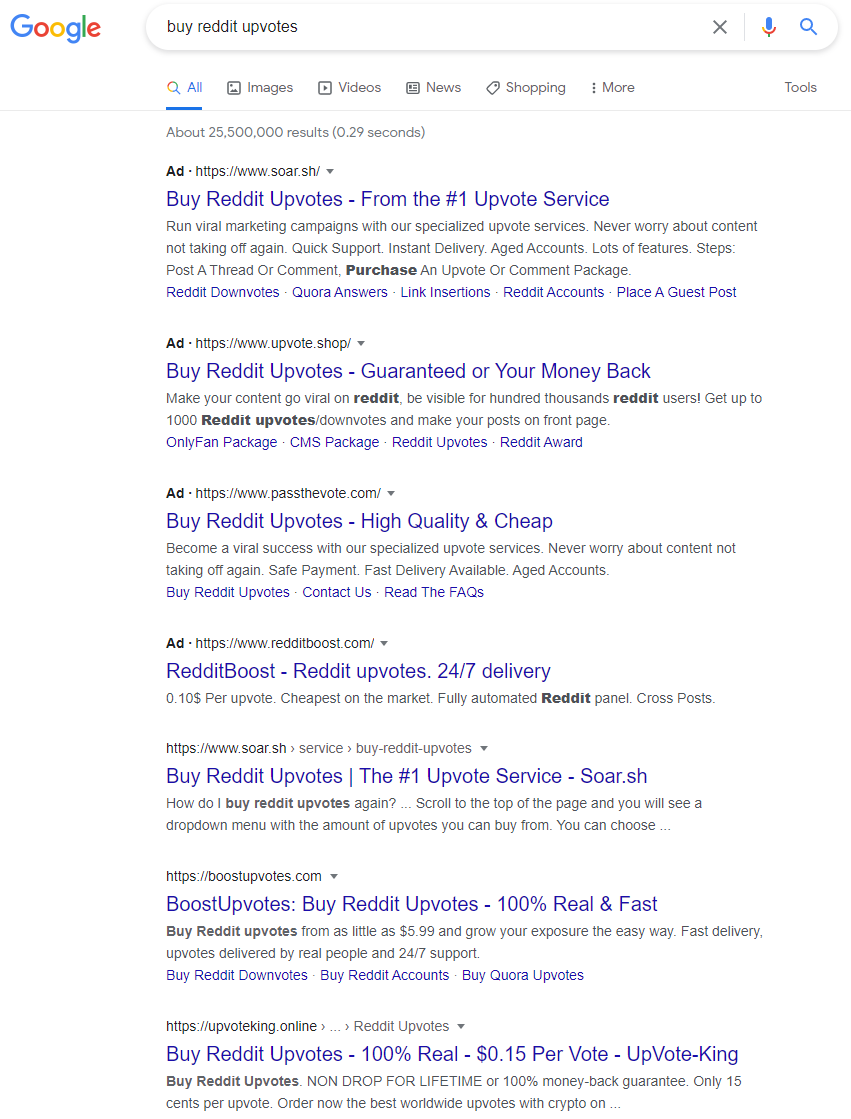 Apologies for the bid bot era flashbacks these domain names may have given you.

Now we get back to the issues with private databases.

I can't find the video right now but there was a post trending on r/videos where OP was admitting he bought votes just for fun and just because he could and that it wasn't even that expensive.

Who can stop this? Admins, they're the only ones with access to logs and activity on their private database. Not even moderators can figure out, meaning those who are in charge of distributing Moons tokens to people based on activity or shadow/ban you can't even find out if any foul play has occurred for certain Moons farming. Now of course Moons is only on the Rinkeby testnet and the prices are still fairly low as the tokens are on one xdai exchange on said testnet, but give it some time, a mainnet migration and a few real dex's and ex's and value and you will start seeing people do a lot of things to get those Moons. As you've seen people who used to abuse bid bots on Steem as much as they could because it was still generating them some profit, people are going to do the same on Reddit but with less transparency.

Some questions that arise from my side are. What happens to your Moon distribution if you get banned before the month is over?

Imagine you're a popular user, your flair shows you have a lot of moons, a lot of followers on Reddit and you generally are well known to often land some upvotes just because people remember you and often agree with what you share or comment. One day you say something wrong, get spam reported for something controversial and a Reddit moderator or admin who may not be having a great day and doesn't want to bother double checking what occurred bans your Reddit account. Sure you may still have your Moons you've earned before that, even if you still get the next distribution but what about the earning potential you'll now miss out?

It brings us back to a lot of the centralized problems that people speak day in and out about that occur on Twitch and other places where people are mishandled and get banned in biased ways and lose out on their ways of making a living they've worked hard to accomplish. Imagine if a witness on Hive hates you that much that he'd just ban your account and you won't be earning any post/comment rewards but not even curation cause that doesn't exist there.

Reddit will be like the centralized exchanges that everyone keeps warning users about. Exchanges hold people's coins, the same coins that were initially created to avoid having to trust others with your money. Now you'll have to trust others not to shadow/ban you.

I'm not even going to get into the whole immutability, freedom of speech and censorship resistance cause that's obviously not something a company is going to care about at all, even less a Chinese conglomerate such as Tencent being invested in it.

Anyway, will be interesting to see what happens. I'm going to be trying my best to build communities and onboard some early birds before Reddit drives more attention to crypto and those users find out what they've been missing out on here on Hive.

Maybe we should create our own token in our r/hivenetwork subreddit? :P