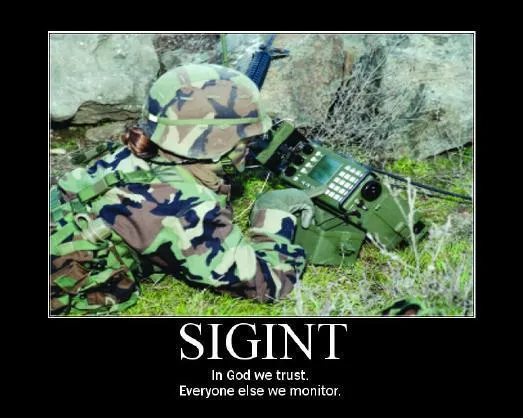 I'm stuck hallway through a masters program in Intelligence Studies (spy, not IQ). Last year I shared some work that I had done. Since my arm is fugazzi, I'm returning to the sharing of that work.

The elephant in the room

I doubt there is anybody left in the country that has any trust at all in the IC. I certainly don't, and that sometimes show up in my work.

I do think there is still value to you the reader here. Espionage is like informationwar or a gun. it is a tool to use when necessary. While the everyday Hiver doesn't have a taxpayer-filled bag of money to support their own agency, there is a lot of education that is valuable to me (and I think to you). Part that if you can explain where the IC has fallen from where it should be, your arguments against it, or for its reform or for its disbandment will carry more weight.

And on to the show

Signals Intelligence (SIGINT) is one of those technologically advanced categories of collection and serves as a key intelligence collection discipline. It has also come under a lot of scrutiny given its mass surveillance abilities. For this week’s forum posting: Categorize the challenges facing the SIGINT community and analyze some of the implications of these challenges for the future.

SIGINT has a great capability to collect data for intelligence. Aid and Weibes (2001) summarize the benefits (not all are listed, as some were discussed in terms of Cold War application):

However, despite the advantages of the SIGINT discipline, it also is presented with multiple challenges.

The first challenge is common to all disciplines in that SIGINT can be managed with a lack of critical thinking. Berkowitz (2008) and Rudner (2015) note the changing nature of the threat environment, which includes non-conventional threats. Aid (20003) points out that even after 9/11, “substantially larger collection resources [were] being devoted to higher-priority transnational intelligence targets, such as trying to stem the flow of illegal narcotics from Latin America and countering the proliferation of weapons of mass destruction around the world.”

A second issue is that technology can be relied on too much. Berkowitz (2008) further acknowledges that technology is constantly changing, as well as threat. Agrell (2012) argues that technology has been misused as a “universal solution". In addition, Warner (2012) claims that “technology’s impact on intelligence has been incompletely examined.” A more challenging disadvantage is that over-reliance on SIGINT can diminish the proper use of HUMINT. Silverstein (2015) quotes a former CIA agent; “SIGINT, he added, ‘doesn’t tell you anything about context or your target’s plans and intentions. To get that you need human intelligence.’” However, Aid (2003) makes a countering argument that HUMINT may be extremely difficult in some cases, such as penetrating Al-Quaeda.

A final challenge is also shared with other collection disciplines, that of civil rights, namely privacy. Thompson (2011) lays out a fundamental right:
The fountainhead of privacy in the United States is the Fourth Amendment, which ensures that “[t]he right of the people to be secure in their persons, houses, papers, and effects, against unreasonable searches and seizures, shall not be violated....” For at least the past 50 years, this provision has been subject to more litigation than any other in the Bill of Rights. This may come as no surprise, considering the Fourth Amendment protects, as Justice Brandeis put it, “the right to be let alone—the most comprehensive of rights and the right most valued by civilized men.

Schlanger (2015) claims that the SIGINT performed by the NSA complies with the law, but she makes two points regarding that compliance under what she terms “Intelligence legalism”:

In conclusion, we should consider the use of SIGINT in terms of critical thinking and ultimate mission. SIGINT should be collected where it is efficient, it should be verified whenever possible with other sources, it’s capabilities should be monitored for change, and it should be employed with the goals of protecting Americans and their civil rights.

Silverstein, K. (2015, September 11). US Reliance on Too Much SIGINT and Too Little Spycraft Is Dangerous and Expensive. Retrieved December 3, 2019, from Observer website: https://observer.com/2015/09/us-reliance-on-too-much-sigint-and-too-little-spycraft-is-dangerous-and-expensive/

we will explore the background and intricacies that define Signals Intelligence (SIGINT). The development of more sophisticated forms of communication, most particularly with wireless communications, resulted in the formation of electronic intercept capabilities. The Second World War (1939-1945) saw a dramatic increase in wireless communications not only to direct far-flung activities on a global scale, but also on the tactical battlefield. Additionally, these communications were not only transmitted “in-the-clear” but also employed sophisticated methods of encryption. It was during this period that the United States and its Allies started creating early computers to decrypt these communications and to provide the strategic advantage to win the war.

The period after the Second World War also ushered in advances in technology. It also saw the emergence of the Soviet Union as a global power and the initiation of the Cold War. With much of the Eastern bloc controlled by the Soviets and with limited access to the West, the employment of SIGINT activities provided much of the “reach” into the Eastern bloc to gauge adversary intent. Additionally, the employment of SIGINT activities evolved into operating at various layers and domains: space, cyber, airborne, ground, and maritime environments. Today, the SIGINT community spans the globe attempting to glean relevant and pertinent intelligence across a broad spectrum of communications.
Lesson Objectives

Students will be able to:

In this lesson, we will discuss:

US long history dependence on technology
2 challenges:
1 – threats are changing, so intel requirments are changining
2 – technology is changing
historically, R7D performed within the united states and funded by govt
now, R&D poerformed outside US by private comopanies

“A remarkable attribute of Information and Communications Technology(ICT) is its almost global accessibility,and that technical competencies incomputers are likewise widespread within and across most communities.
‘

“While many instances can be categorized under one of these headings, thenew cyber dimension has obviously blurred the lines between them “

“Dr. Ayman al-Zawahiri issued a video pronouncement inFebruary 2011, urging jihadist operatives to innovate and find new waysand means of attacking high value infrastructure targets:If we are not able to produce weapons equal to the weapons of theCrusader West, we can sabotage their complex economic and industrialsystems and drain their powers....Therefore, the mujahideen [Islamicwarriors] must invent new ways, ways that never dawned on the mindsof the West. “

“The first recorded incident of a relatively successful large-scale terrorist cyberattack on corporate computer systems, attributed to the Tariq bin ZiyadBrigades for Electronic Jihad, took place in 2010. While no evidence is yetavailable of systematic cyber-terrorism on the part of al-Qaeda or itsaffiliates, the updated United Kingdom (UK) counter-terrorism strategy(‘‘CONTEST 2’’), introduced in July2011, warned that in the aftermaththe death of Osama bin Laden, al-Qaeda had called explicitly for ‘‘cyberjihad,’’ along with other terror operations.21 “

“the picture that emerges from both the Snowden and official disclosures is of an agency committed to legal compliance, although both minor and major noncompliance is nonetheless frequent. “

ME: Ok, sure, I believe you

“The NSA and the administration in which it sits have thought of civil liberties and privacy only in compliance terms. That is, they have asked only “Canwe (legally) do X?” and not “Shouldwe do X?”This preference for the canquestion over the shouldquestion is part and parcel, I argue, of a phenomenon I label “intelligence legalism,” whose three crucial and simultaneous features are imposition of substantive rules given the status of law rather than policy; some limited court enforcement of those rules; and empowerment of lawyers. Intelligence legalism has been a useful corrective to the lawlessness that characterized surveillance prior to intelligence reform, in the late 1970s. But I argue that it gives systematically insufficient weight to individual liberty, and that its relentless focus on rights, and compliance, and law has obscured the absence of what should be an additional focus on interests, or balancing, or policy. “

“Efforts to implement most of the Church Committee’s substantive recommendations as statutory law failed; they entered American law instead as part of Executive Order 12,333.As already quoted, the Executive Order does expressly state(in language unchanged from its 1981 promulgation): “Set forth below are certain general principles that, in addition to and consistent with applicable laws, are intended to achieve the proper balance between the acquisition of essential information and protection of individual interests.”301That is, one of 12,333’s purposes is to fill the civil liberties gap left by constitutional and statutory law “

“Within a particular organization such as the NSA, the impact of a rights and compliance frame is to allocate decision-making to lawyers.If those lawyers have a civil libertarian orientation, this could be a channel by which rights and compliance serve civil liberties interests.That is, one could imagine that agency lawyers might systematically exercise a pro-liberty orientation, which could fill gaps that might otherwise exist.However, multiplying accounts of lawyers in the Intelligence Community suggest otherwise.A growing shelf-full of articles and books document and even celebrate the lawyers who now populate the military, the CIA, and the Department of Justice’s National Security Division.Jack Goldsmith, for example, has labeled these lawyers a key part of “something new and remarkable,” describing “giant distributed networks of lawyers, investigators, and auditors, both inside and outside the executive branch, that rendered U.S. fighting forces and intelligence services more transparent than ever, and that enforced legal and political constraints, small and large, against them.” “

“The fountainhead of privacy in the United States is the Fourth Amendment, which ensures that “[t]he right of the people to be secure in their persons, houses, papers, and effects, against unreasonable searches and seizures, shall not be violated....”6 For at least the past 50 years, this provision has been subject to more litigation than any other in the Bill of Rights.7 This may come as no surprise, considering the Fourth Amendment protects, as Justice Brandeis put it, “the right to be let alone—the most comprehensive of rights and the right most valued by civilized men. “

“A recurrent theme flows through Fourth Amendment cases: criminals devise new ways to commit crimes and evade the police; the police devise new ways to intercept communications and detect criminal conduct; and the courts are left to sort out the constitutional from the not in these new contexts. In 1928, for example, when police eavesdropped on the telephone conversations of Roy Olmstead and his bootlegging conspirators, the Court refused to label this a violation of the Constitution because the police had not physically trespassed on the defendants’ properties in making the wiretaps. “

“Historically, only govern-ment had the financial means and the legal authority to conduct SIGINT activities, and, in our experience, many members of the U.S. government still hold this opinion today. We tested this viewpoint by conducting a market scan to seek examples of how new technologies, innovations, and behaviors are challenging the existing government-only paradigm “

“ a former senior NSA official indicated that the
Sigint collection and processing resources dedicated to the terrorist problem
by the agency at the time were relatively modest when compared with the
substantially larger collection resources being devoted to higher-priority
transnational intelligence targets, such as trying to stem the flow of illegal
narcotics from Latin America and countering the proliferation of weapons
of mass destruction around the world”

“ from a Humint perspective, trying to penetrate the Al-Qaeda
organization was, and remains, a difficult proposition given its unusual
internal makeup”