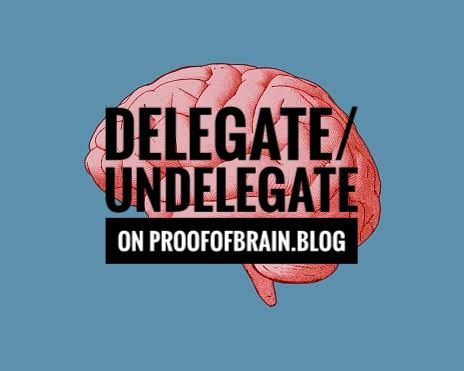 Good to see now we can delegate, undelegate on proofofbrain.blog itself. Thanks to @leprechaun for putting up the hard work and making this possible for us.

It was an issue because I tried myself before delegating my POB from proofofbrain.io but it didn't have that feature that time but as now @leprechaun has announced that we can now do it being on proofofbrain.blog it will make things easy for users.

Things like these can add value to POB itself and it's good to give users the ease of using the platform.

I think it's good for the whole Hive community if all these developers come together share their suggestions, bring in new features and produce even better.

Unity does have the power because it gives us a chance to unite the different brains together to get the best outcome of it.

POB being sort of new is going good so for. Users involvement makes it even more valuable. New features like are if added regularly then POB can flourish can be successful in the coming future.

So @leprechaun, thanks again for providing us with this facility.