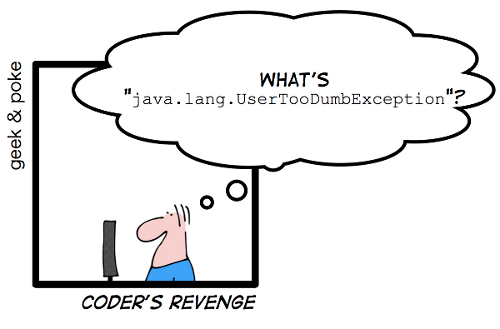 Hello it's a me drifter1 and today we will talk about Exceptions in Java. We catch Exceptions using the try-catch statement and the Exceptions can be predefined ones from java libraries, like for File Errors (we will talk about them next time) or user-defined that I will show you how to create and use them.

An Exception is an Error that occurs when something that is not supposed to happen happens in the Code.

Those Errors can be:

If some type of Exception occurs and we don't have any Code to catch it then the programm will most of the times crash or stop functioning properly. So, let's discuss how we can catch one.

Using this type of statements we can do most of the stuff that we need for Exception Handling. But, we can't use it directly when having Custom Exceptions. Let's take a look into them.

An user-defined Exception is a Class that inherits from the Exception class from the Java library. We can "fill" the class with 2 ways:

To catch Exceptions that are not user-defined we simply put the Code that could cause one inside of the try-catch statement, because the Class functions that we are using already test for Exceptions and can catch them but can't do something until we do something using try-catch.

We will make a little programm that creates an Student with id, name and surname using an overloaded constructor, that uses Setters for setting the variables. The Constructor will check if the id is greater than 0 using a Custom Exception that gets thrown inside of the setId() function. Finally, we will do it right and print it out.

In this example it actually doesn't make so much sense to use an Custom Exception, but I think it is some good Code to understand how to use them. Next time we will get into Files and use Exceptions to check if a specific File exists before reading from it to prevent Errors.