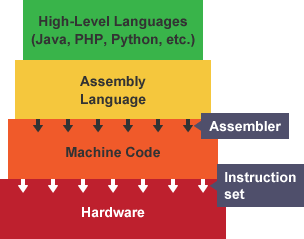 After talking about C and Java so much, I wanted to start with another Language. The Programing Language I chose is Assembly! I already said in previous posts, that writing in Assembly takes a lot of time and patience. But knowing how the Code is being run on the CPU, after being translated into Assembly Code, helps us make our Code faster and to find some Bugs in more advanced Programms, that else would be missed! So, without further do, let's get started!

I will talk about MIPS Assembly, cause that's the type of Assembly we learned in our University and I have a lot of experience and many many Codes, Notes and other stuff that will help me explain it to you. The Syntax in other Assembly Languages doesn't change a lot tho! There will be differences in the naming and the parameters of our functions, but the basic "logic" stays the same. So, knowing how to write Assembly for MIPS CPU's will not put you back and you can jump easily into Intel and AMD CPU Assembly Coding :)

To run our Code we will use a software called QtSpim that you can find here. This Software let's us run our Code Step after Step or normally, see the Content of all the Registers, the .data and the .text regions of our Assembly Code (more information for all that comes in a bit).

All the Instructions we will use are 32 bits (4 bytes) long. This Instructions are executed in one CPU and we will use Registers for getting information like values, addresses etc. for all the different kinds of Instructions there are. The Higher Level Code that we write (C, Java etc.) gets translated into Assembly Code when Compiling it! So, our CPU reads Instructions like the ones that we will talk about in all our Assembly Posts!

Those Registers can be accesses using the:

The Datatypes are the following:

When inputing we will put:

The Code is split in 2 parts: one contains the variables and one the code itself. Those 2 are called .data and .text.

So, we could create an integer called num with value 3 like that:

In there we will later on declare strings that we want to print out in the terminal/console.

In .text we will call instructions to do stuff with our Registers and Variables and contain functions.

A Instruction that increments the value of register $t0 by 1 looks like this for example:

As you can see until now, we don't put semicolons (;) like in C or Java, cause every line is an Instruction! We also have to use the right small/capital letter names and so on, cause the language is also cap-senstitive. Also, comments are done using the # symbol instead of the // or /* */ we used to use in C or Java. And last but not least the first Code that will be run, will be located inside of the main function and we can have more than 1 functions.

Last for today here a Example Code. Try running the following Code to set everything up in QtSpim. The file needs to have a name that ends with .s like this: test.s

This was the end of today's Introduction!  Hope you enjoyed it and learned something new. I will try to keep things simple and small for the first couple of Assembly Posts. Bye :)