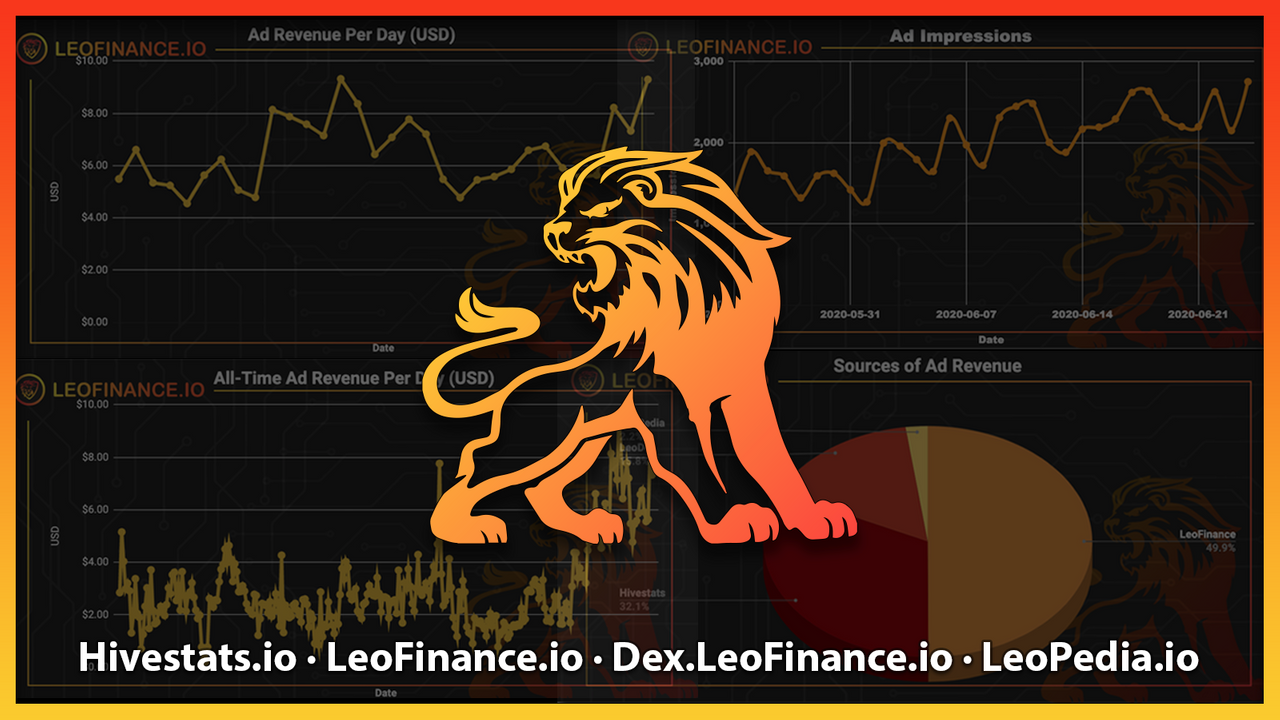 Over the past month, we've seen a significant gain in the ad revenue that the LeoFinance community websites generate. I know many of you have been waiting for this report as I've hinted a few times at the increasing ad revenue per day thanks to the addition of Hivestats and LeoPedia.

As we look to increase the portfolio of apps further and simultaneously grow the usage of our community's existing apps, I think we'll continue to see this incredibly positive growth trend in ad revenue generated per month. We were steadily growing our ad revenue up until a few months back when the Steem-Hive situation took place and we hit a brick wall in terms of our pace of development and community growth.

Now that we're on Hive, things are better than ever and we are finally back to working on building new apps/improving existing apps once again. The rest of 2020 will be packed with new releases on both of these fronts (p.s. we're still finalizing the roadmap for 2020 and will release that as soon as possible).

Watching the ad revenue data each day has been both informative and wildly interesting over the past 2 months. We've seen the ad revenue triple from March to May.

That's a 2.15x increase in average daily ad revenue over the past month. The introduction of https://Hivestats.io led to a massive increase in new ad revenue, but it also contributed to an increase in revenue generated by LeoDex and LeoFinance as both of these sites are interlinked with Hivestats. Over the past month, we've made sure to link all the LeoApps together to make the process of utilizing our community apps easier than ever.

Example: LeoApps menu on LeoDex (all of our websites have similar top menu displays)

Each of these sites has ad displays that generate revenue based on impressions and clicks. Their share of the ad revenue fluctuates as the user base for each website changes, campaigns are launched etc. The current breakdown is displayed in the above chart.

Hivestats and LeoPedia were launched in the last ~45 days and Hivestats has been a major success on the Hive blockchain. It gained quick adoption and the proof is in the ad revenue.. The LeoFinance interface has existed for nearly 1 year now and after just 45 days, Hivestats has almost overtaken the interface in terms of generating ad impressions.

LeoFinance has 3 other applications in the works, which will be rolled out sequentially for the remainder of 2020 (more info on these apps will be released in our official roadmap).

Forgive the messiness of this chart, but it shows the all-time ad revenue per day of LeoFinance since we started. For the majority of this timeframe (up until ~45 days ago) we only had LeoFinance.io and dex.leofinance.io as ad revenue generators. As I mentioned before, we were steadily earning in the range of $2-4 per day and were seeing some small but steady growth up until the beginning of this year when we saw a major drop due to issues on Steem. With Hive running smoothly, we're back and better than ever.

It can be hard to tell from this chart, but we're now consistently averaging $6.51 USD per day in ad revenue (as previously mentioned). While this may not seem like much, it is actually quite significant given the current size of LeoFinance's user base and daily token volume.

The fun thing about ad revenue is that it is fully scalable. If we're earning $6.51 USD per day as a relatively small community, we can easily earn $65 or $650 per day as our community continues to grow. I don't have any specific long-term targets, but 10x'ing our current ad revenue over the next 6-12 months seems reasonable given the 2x increase over the past month.

How Much LEO Is Getting Burned?

Something funny happened in the last ad report.. The LEO price was around 0.08 LEO/HIVE and we set the ad purchases for the month around that level. After the report came out, the price tripled and our buy orders got left in the dust. We've been readjusting the orders to try and strategically buy LEO when the price dips, but it's been slow going in terms of getting bids filled.

The leoads burn account now has 1033 HIVE that it's using to buy/burn LEO throughout the month. In the past month, it's burned 1,521.847 LEO. Feel free to leverage the magnificent feature of blockchain transparency to track the burn transactions and current balances on the leoads wallet page.

At current prices, that 1033 HIVE will buy and burn roughly 5500 additional LEO.

The mission of LeoFinance has always been to reward content creators on the Hive blockchain. The Hive community is amazing and the Hive ecosystem is also incredibly rich with content, features, apps, etc. The problem with Hive, however, is that it can be hard to get noticed and earn both upvotes & engagement.

If we look to the top creators on Hive in term of earnings, comments and general engagement, we see that it primarily flows to people who have been here for years. While not necessarily a bad thing, there is an issue of getting noticed and engaged in the broader sea of content that lives on Hive.

With communities like LeoFinance, I believe that we solve that issue. SMTs + the communities feature were intended fragment the Hive community into smaller subsets (like subreddits) so that people with similar interests could connect with each other, earn rewards and build an engaged community.

The point I'm making here is that while it's fun to talk about ad revenue and discuss the numbers, the underlying mission is simply to make LEO a more valuable unit of account in our community so that content creators, curators and readers can earn more during their journey on Hive and within LeoFinance.

With that said, I want to give a shoutout to all of the existing community members who have done a great job in reaching out to people both on Hive and on Twitter and explaining the value of posting through our interface. This really cannot go understated as content which is created from https://leofinance.io drives an immense amount of value back to the LEO token and ultimately into the hands of every LEO community member.

You can also now track the # of unique daily Hive accounts that post through https://leofinance.io on dapp tracking websites like Stateofthedapps: 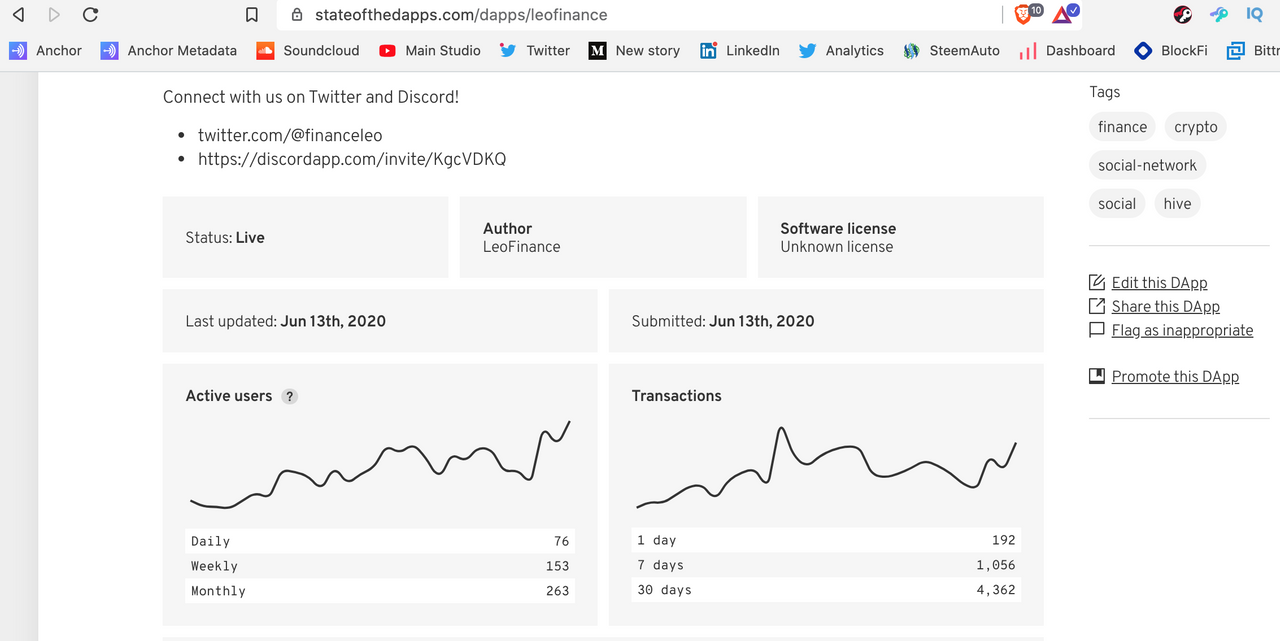 LeoFinance on State of the Dapps

Note: our active users who post directly from leofinance.io is rising in tandem with the ad revenue. Coincidence? I think not 🦁