Hope you're having a great Monday so far. I'm having a chai latte to get my day started. Not really sure how to feel about it. I normally drink coffee or espresso so this is definitely different. I mean, it tastes good but I don't know if it's meant for morning. It feels like this is what I would drink before bed instead of hot chocolate. I got a new vape pen cartridge called Hawaiian Haze and man it fucking rips. I ate an 80 mg edible this morning as well so I'm in store for another fantastic day. I might have to find my way to a real hiking trail. Yesterday's adventure to the Georgia Guidestones was cool but it wasn't much of a hike like I thought it would be. Check that out here if you wanna see some cool pics I took and learn about a piece of history. Anywho, on to the actual thing I wanted to write about - CryptoBlades Kingdoms. No, this isn't the CryptoBlades we all know and love(hate). This is a new game coming soon! 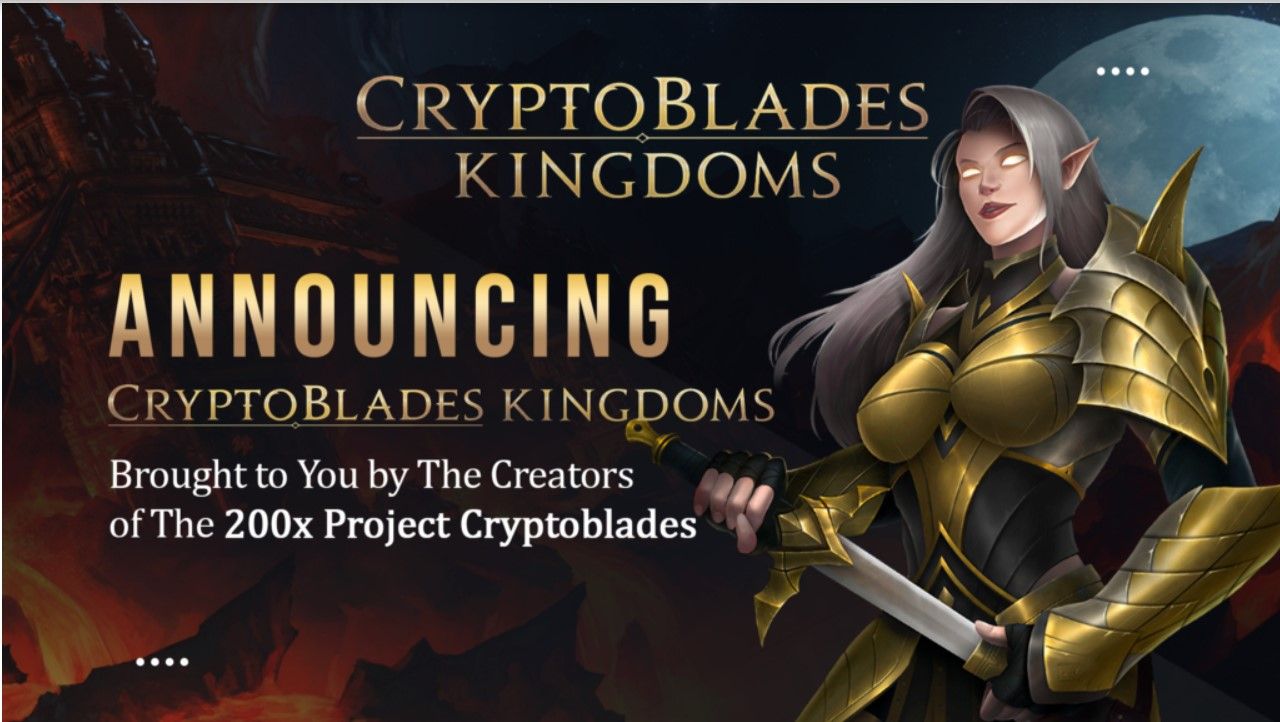 So if you've followed me for a while I've written a few posts about CryptoBlades in the past. It's a "Play to Earn" game where you recruit characters, forge weapons, and battle NPCs. Most recently Raids were added but that turned out to be a flop in my opinion, especially with BNB gas fees on BSC. I followed the game from the beginning to the insane SKILL prices around $184 and now back down to $19.50. What an exciting run it was. It happened so fast that it actually destroyed the play to earn mechanism. The game was VERY profitable for a short period of time. You could earn $4000/month with 4 characters. Of course this didn't last very long at all. The massive influx of players caused the SKILL rewards per battle to dwindle down to almost nothing. Factor in BNB gas fees and you're literally paying to play the game. Here's a look at what I'm talking about. You're losing money every day if you're still actively playing the game, and even their in game "Earnings Calculator" is funny to look at.

Even if somehow you maxed out all 4 characters at level 255 ( I assume this is max because it's where the calculator stops), you lose money every day playing. Here's what that looks like:

It's pretty sad to see that the game is pay to play at this point, and I have given up on it. I still have my characters and some weapons but I refuse to pay to play. I'll wait till they either fix it or completely kill it. Maybe the solution is on the way already (probably not).

So, there's been a few hints and things on Twitter about a new game coming soon. It's finally gotten an official announcement which you can check out here. You can also keep reading and get my thoughts and criticisms of it. They start off the article by name dropping a couple developers to hype up how good the game is going to be. I don't give a shit who develops it, no one is going to play if if it costs money and offers little to no incentive. Moving on, some bragging about crazy 178x returns from IDO pricing and then some more bragging about the price increase for investors. No one fucking cares guys. People want a game to play and earn a little money, not one that will break their banks. Or wallets. 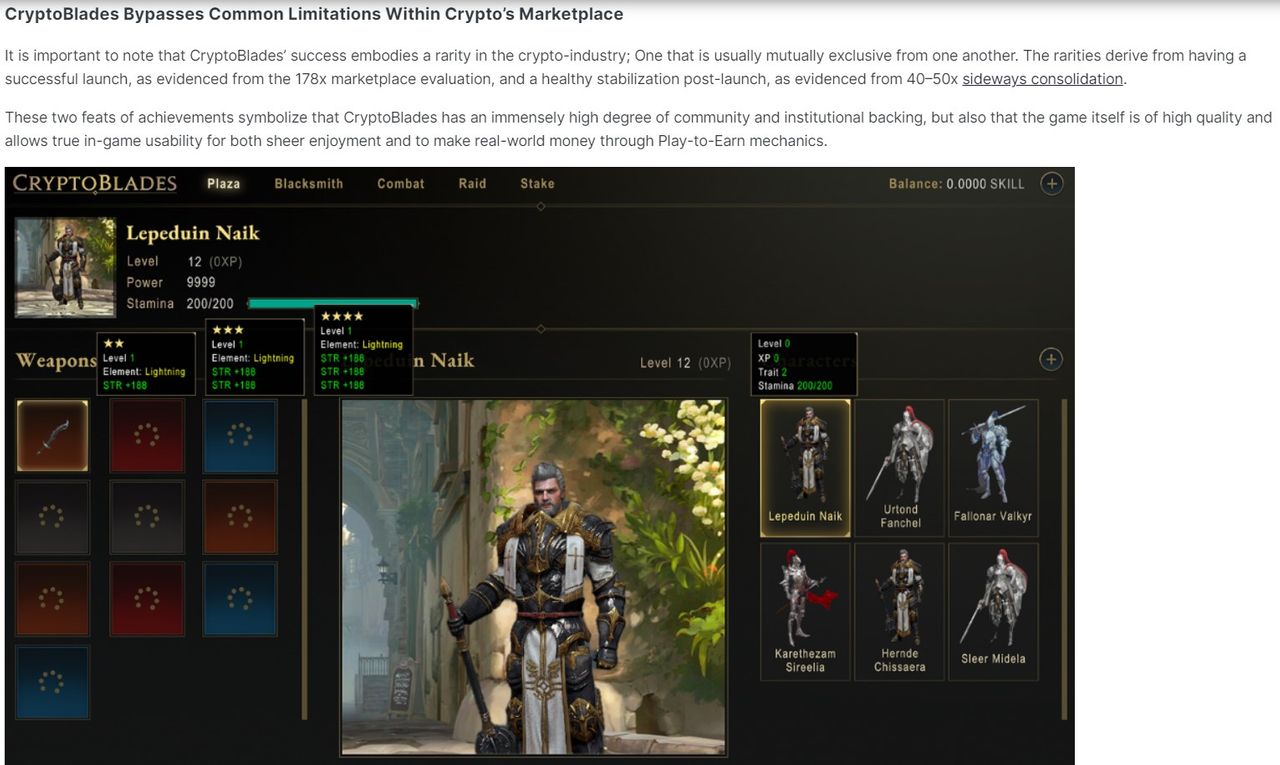 Some actual information about CryptoBlades Kingdoms finally. It's going to be an MMORPG that features land building, cooperative combat, and guilds. I can't even begin to imagine what this will actually look like, but I'm not a game developer. At start, you get a randomly generated village on a random chunk of land. The goal is to build up the village. This can be done by attacking other villages, dungeon crawling, and much more. Who knows how much more, but there is supposedly more. I don't mean to downplay their abilities at all, but usually when a game is this over hyped it turns out to be trash. Please don't be trash. I want a game to play and enjoy! 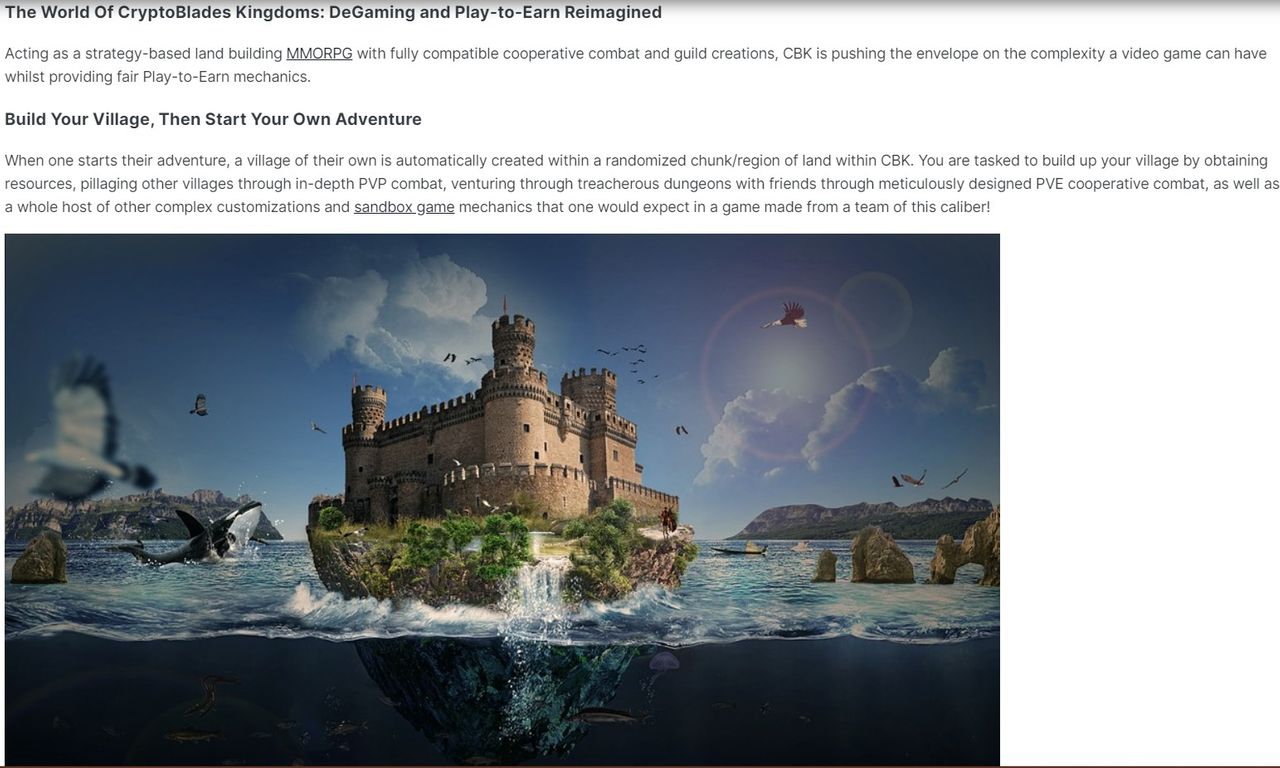 According to the article, the Play to Earn mechanism will take into account a user's strategic skill when calculating rewards. How? Who the hell knows. They use attacking another village as an example but literally repeat the same thing: be strategic and you'll earn more" without actually telling how it works. I guess that would be a spoiler. They boast "high profit margins" a couple times in the article which tells me they aren't too focused on the actual game. They're more focused on pumping those bags, you know what I mean.

I would hope that they reward the players of the original CryptoBlades in some way within the new game, but I doubt that will happen.

That's pretty much the important parts. Please check out the article if you care to get the full announcement. I am not an expert, nor am I a game developer or financial advisor. I'm here to see what comes out. I don't mean to completely shit on the game because it hasn't been released yet. I truly hope that it turns out to be a fun game where you can earn a little bit of real world value, but my hopes aren't high. What do you think?

Lemme know if you'll give it a play.