beelzebubba74
a month ago
in#politics

I am so tired of the people of this country and perhaps the world putting everyone into categories and I am especially tired of seemingly everything that is achieved in life being attributed to racial advantages. I grew up in and live in an area that is very diverse and when I went to high school our school was around 50% non white. While I did not keep up with everyone that I knew back then, there is one thing that stands out: The people that tried to achieve in life tended to do so and those that did not, didn't. Their race had nothing to do with it.

However, this racial divide and taunting that comes along with it is something that some people embrace and it is apparently even sponsored by schools that definitely should not be accommodating something like this. 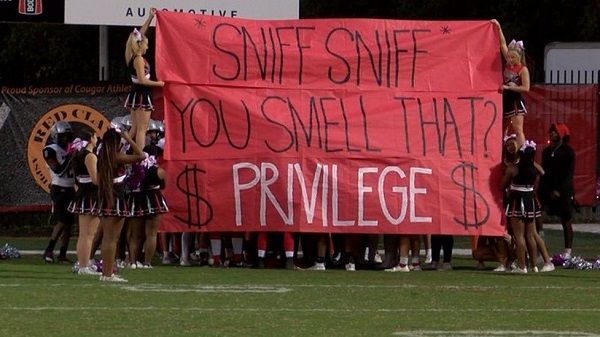 Thankfully, the school faced some backlash for this and rightfully so. Imagine if you will that a sign was made that was taunting black players and families? If you think that it would be wrong for anyone to do that, it has to be also wrong for the reverse to be the case.

This is a big problem with the entire "Critical Race Theory" that some are proposing is a mandatory part of a kid's education and kind of sums up why I have a problem with that. They have already succeeded in indoctrinating the kids on this team and no one is taking responsibility for whose idea it was. Go ahead and have a look at the above picture there though. Why are the white girls on the top of the pyramids? Are they more privileged or something?

This of course happened in the Western part of North Carolina and I don't make it any secret that I, and most of the people who live over on the East side of this state, think that most of those folks are bat-shit crazy.

Why on earth they thought this was a good idea is just crazy to me and even worse, there had to have been members of the administration and coaching staff that were aware that it was going to happen yet they did nothing to stop it.

I don't want anyone to get fired or for players or cheerleaders to get suspended or any revenge-oriented garbage like that but isn't it about time we stopped all of this? It isn't helping anyone after all.

Butler ended up winning the game 28 to 21. So I guess all that privilege didn't really work out for Charlotte Catholic in the end.