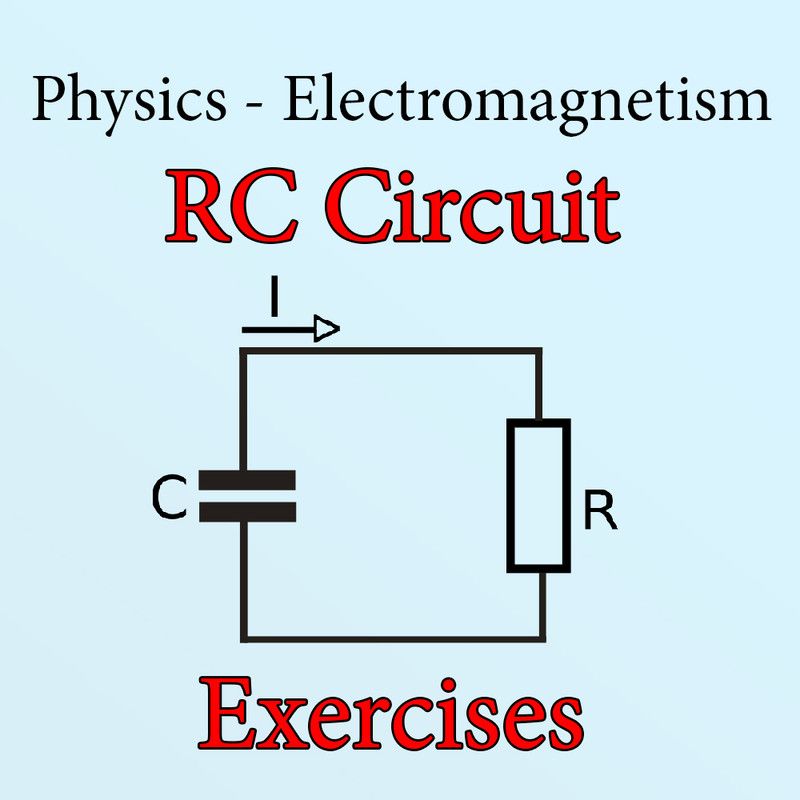 Hello it's a me again Drifter Programming! Today we continue with Electromagnetism to get into RC circuit exercises. You should read the previous article of mine if you haven't already, cause this post will be based on the R-C circuit theory we covered there. So, without further do, let's get straight into it!

To start out easy, let's start with a Kirchhoff application...

Suppose that we have the following circuit:

Let's say that all resistors have the same resistance R = 15Ω and Vb = 10V. What is the current that flows through all the resistors of the circuit?

Applying the KCL law the current i3 is equal to:

By substituting the current i3 in the second equation and adding them together we end up with the current i1: 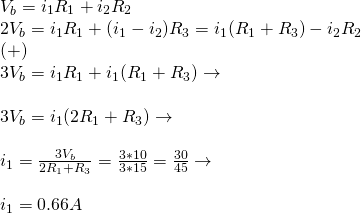 That way the currents i2 and i3 are:

That my friends is why you never change the numbers of examples :P The funny thing tho is that the currents are not negative, which means that the direction shown in the diagram is correct for our application!

Suppose a simple RC circuit with a battery, resistor, capacitor and switch like the following: 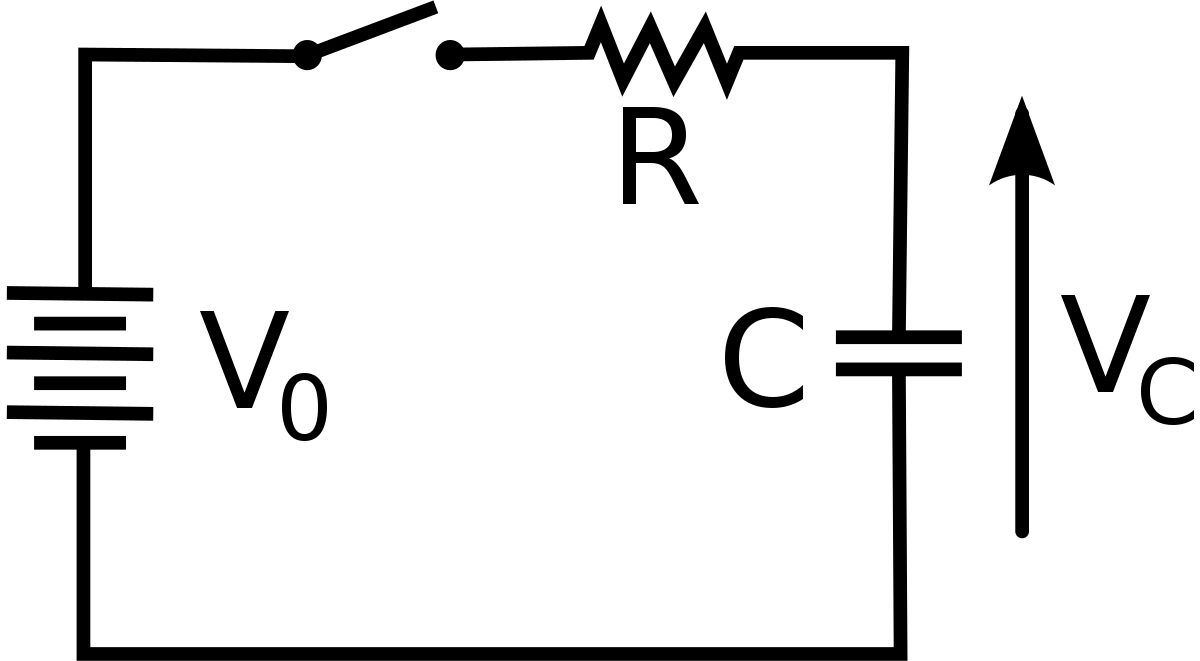 This example will be based on the example at: https://www.electronics-tutorials.ws/rc/rc_1.html.

Suppose that the voltage is V = 4V (+ pole on top, - on bottom), that the resistance of the resistor is R = 70kΩ and that the capacitance of the capacitor is C = 1500μF (tweaked the numbers a little bit). The switch is being closed at t = 0.

The time constant is given by τ = RC and so is equal to:

From the tables we know that the voltage is at ~50% of maximun after 0,7τ and so:

From the tables we know that after 1τ the value is ~63% of maximum and so:

To fully charge a capacitor we know that it takes 5τ seconds approximately (steady state period) and so the time taken is:

For 100 seconds we don't have an easy and direct way and so we have to use the equation v(t). This means that the voltage after 100 seconds is:

Because τ = 105seconds we see that our calculated value is very close to the value we calculated for 3. And so whenever there is some "known" result we use the percentage from the table, else we have to use the formula/equation which works for any time t.

Suppose the moment of the previous example, where the capacitor is fully charged. The total charge reached is of course equal to: Q = CV = 1500μF*4 = 6mC. Let's say that we "magically" get rid of the battery and so only the resistor and capacitor remain and also the switch, which at first (t = 0) is open.

I will be based on the example at: https://www.electronics-tutorials.ws/rc/rc_2.html cause it contains good questions. Of course the time constant is the same as before (τ = 105s).

From the table we know that after 0.7τ seconds the voltage has dropped by ~50% and so:

From the table we know that after τ seconds we have discharged to 36,6% of maximum and so:

The time taken for a full discharge is approximately equal to 5τ which is:

At this point the voltage and current are considered zero!

For 300seconds, which is not a direct multiple of the time constant (τ) we don't have a direct percentage and so we have to use the equation v(t) which gives us:

Let's consider the circuit of before, but now the battery will also have an internal resistance of r = 1kΩ. I got the idea for internal resistance from the example at: https://phys.libretexts.org/, which is an application for relaxation oscillators!

The full charge and full discharge time is approximately 5τ (steady state period) and so equal to:

From the table we know that after τ seconds we will reach 63.2% of the maximum voltage (supplied by the battery) and so:

From the table we know that after τ seconds we will reach a voltage 36.6% that of the initial voltage we had before discharging and so:

We can see that the voltage doesn't change at all. Of course after the same amount of time the first circuit would be "fully charged" (and charged in general) much quicker, but when talking about τ seconds the voltage is exactly the same...

More examples can be found in the following:

More great problems on which you can practice on can be found here:

It gives you the solutions/answers, which means that you can compare your results!

Some Mathematical equations that I had in this post where drawn using quicklatex!

And this is actually it for today's post and I hope that you learned something!

Next time we will start getting into Magnetism, starting off with Magnetic fields!