Hello it's a me again Drifter Programming! Today we continue with Electromagnetism to get into Magnetic Energy Density. So, without further do, let's get straight into it!

Energy stored in a magnetic field (or inductor)

When conductors carry current, a magnetic field surrounding them is being produced. Having the current change with time we cause an electromagnetic induction, which causes the creation of a electromotive force (emf), that is a voltage that opposes the change in magnetic flux (Lenz's law) that was created by the change of current (magnetic flux is proportional to the current). As we already saw in the previous posts there is one "main" type of induction, which is the so called Mutual Induction between two conductors. One of them is the causes a mutual induction on the other and sometimes the "other" conductor may even be itself (self-induction).

The creation of such a opposing voltage (emf) must have some origin (it cannot be created from nothing). Due to energy convervation, some energy needs to drive the original current. This energy can be thought as some form of potential energy that would be imparted on charged particles moving through a region with a magnetic field present.

By definition, the magnetic energy (potenial energy) stored inside of an inductor is equal to:

Let's now consider a solenoid with length l, N number of turns, cross-section area A and current I that of course works as an inductor. Let's replace the inductance L with the corresponding equation we talked about last time. That way we end up with the following equation for the magnetic energy stored in a solenoid:

From the previous equation we get that the energy density, which is calculated as energy/volume is given by the equation:

For a electromagnetic wave which has a electric / magnetic field ratio c (speed of light) we can also write the electric field's energy density as:

We can clearly see that both the electric and magnetic fields transport energy, when talking about electromagnetic waves! 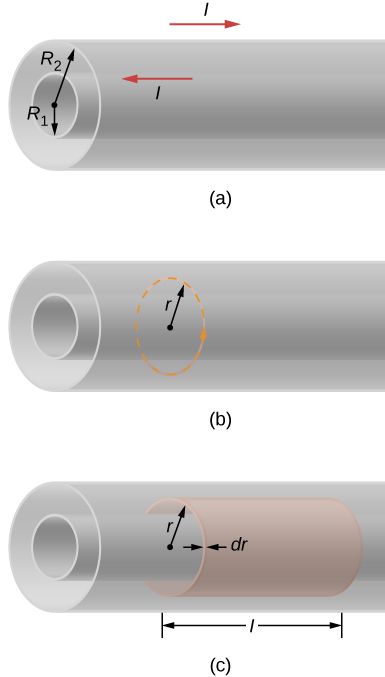 Using the dashed circular path of figure (b) and because of cylindrical symmtery, considering that B is constant along the path we have:

No current is flowing outside of the cable and so B = 0 for any circular path with r > R2 (outside of both cylinders) or r < R1 (inside of the "inside" cylinder). Therefore, all the magnetic energy of the cable must be stored in between of the two conductors.

The energy density of the magnetic field is:

which is stored in a cylindrical shell of inner radius r and outer radius r +dr, and with a length l as shown in figure (c).

By integrating the energy density for this region we get:

Dividing the result with l we get the energy per unit length which is:

From the simple equation of U we calculate the self-inductance per unit length as:

Note that the indutance per unit length only depends on the inner and outer radius of the cable. This means that we can increase it by increasing R2 or decreasing R1, which can also be done by "changing" these cables. Again a physical/geometrical constant...in some way

And this is actually it for today's post and I hope that you enjoyed it! Next time in Physics we will get into R-L (resistor-inductor) circuits.