Hello it's a me again Drifter Programming! Today we continue with Electromagnetism to get into how electromotors work. We already did a lot of the Physics needed in the previous two posts that I suggest you reading, but don't worry a lot will be explained again to make the explanation more understandable. So, without further do, let's get started! 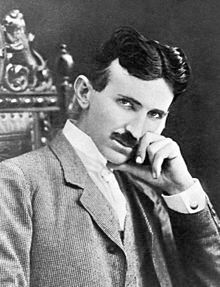 Before getting into the explanation we should first get into some History. Without the work of Nikola Tesla, a Serbian Inventor that studied Alternating Current (AC), electric motors would not be that feasible and efficient as they are now. You might know Elon Musk's Electric Car Company "TESLA" that constructs electric cars. Such vehicles would be impossible without the work of Nikola Tesla. In his age a lot of Scientists and Engineers believed that a motor could not be operated without bruches and commutators. There just couldn't be a motor without a mechanical mean of some kind that generates the current. Tesla tried to solve this problem and also got to a solution.

Tesla worked out the theory and also tested and confirmed all his theoretical conclusions with experiments. In his lab he produced several types of practical motors. Note that he got to all this conclusions without having anything similar to learn from in the whole scientific literature, cause no-one at his time believed that such things where possible. Most patents in his time didn't even have a reasonable reference design and explanation and the inventions where questionable. Prof. Ferraris essay anticipated the date of his application even if the application of Prof. Ferraris was six or seven months after the date of filling out Tesla's patents. Prof. Ferraris stated that the transmission power could be usable only when having a property constructed generator and that the required difference of phase without losses, even with condensers, could not be obtained. Many electricians in England even called Tesla an Imitator and stated that he stole the work from Ferraris! But, as we all know his inventions where original work and he was a great Inventor. So sad that he never got appreciated about it when he was still alive...

Some of the generators that Tesla invented where generators with two or three circuits of differing phase, a three-wire system, the closed coil armature, motors with direct current in the field. The most practicable form of an electromotors was the two-wire motor that contained a single energizing circuit and induced circuits. We will later on explain how the simplest form of motor works!

All this information is from Nikola Tesla's paper released in 1891.

The history is long and contains many different inventions and scientists. To stay organized let's make an unordered-list with the most important points.

Explaining the Physics behind Electromotors

We saw many different inventions that are electromotors and how useful they are, but what is the actual basic principle of an electromotor? Motors are the most common application of magnetic force on current-carrying wires. They have loops of wire inside of an magnetic field. As we said last time the magnetic fields exerts torque on those current-carrying loops, which cause the shaft to rotate. The electrical energy is that way converted into mechanical work.

Basic Physics (that we covered in my series)

You can clearly see that this force is the cross product between the vectors of the velocity and magnetic field. This means that the force is always perpendicular to the motion and so only rotates the particle around an axis. There is no actual kinetic energy loss or gain when moving through an magnetic field. The only things that changes is the direction of movement. The particle is not affected by the field when it moves parallel to the field (φ = 0) and is affected at "max" when moving perpendicular to the field (φ = 90). This all means that the actual force depends on the angle φ between the velocity vector and magnetic field which means that:

Current is build up of many moving charges and describes the amount of charges that move through an area in a time unit. Supposing a rectangle loop with lengths a and b with a being on top/botto. The actual force applied on current can be proven to be:

We see that the force is again perpendicular to the trajectory L (similar to velocity). The actual force is proportional to the current, length of the wire and magnetic field. The forces on the opposing sides cancel each other out, cause they have the same magnitude of current, but with opposing direction. But, there still is a torque. The total torque is:

where A = ab is the Area of the loop, which of course can be anything.

The magnetic force direciton in charges and current can be found by a corresponding right-hand rule...

The product IA is denoted as μ and called magnetic moment. Magnetic moment can be described for any loop of any shape and size. Because only the perpendicular component is being affected by the magnetic field we of course also have to include the angle θ of μ and B which gives us:

Magnetic moment is actually μ=NIA and so the torque in one loop can be multiplied by N which gives us the total torque for N-loops:

The Work produced when moving from an angle φ1 to an angle φ2 is:

with a special case being: W = 2μB when moving from 0 to π (aligned and anti-aligned states). The potential energy difference when W = 2μB is also ΔU = 2μB

Note that we can also get into forces caused on induced voltage, but I don't got into induction in general in my series yet. Either way the magnetic force would then be equal to the emf and so:

Induction is used in induction motors that we will also cover later on...

Electric motors in general involve rotating coils of wire which are driven by the magnetic force exerted by a magnetic field on electric current. They transform electrical energy into mechanical energy and are of two types:

Let's get into each category on it's own...

So, how does the basic motor use all this? The magnetic field of course rotates the shaft. Once the loop's surface alignes with the magnetic field the current is reversed so that the torque is continuous. If the current was not being reversed then the torque would make the loop "go back" and start oscillating. The reversal of the current is being done with commutators and brushes. The commutator reverses the current at set points to keep the motor in a continuous motion. The basic commuator has three contact areas to avoid, which are the spots where we would else have zero torque. The brushes press against the commutator and help creating electrical contact between the parts.

You can clearly see that DC motors use the exact principle that we covered in the theory before and so follow the same exact equations and theorems that we analyzed till now...

The following animation shows the forces and motion:

The current flowing in the parts that are in the front and back is of course parallel to the magnetic field that goes from N to S which clearly shows us that only the other sides are affected by the field.

We can see that the circuit is connected to an energy source (battery), which of course has to be of a special kind so that the current changes direction at the "critical" points. Such an energy source is of course the commutator. Where the rotating coil meets the wires attached to the power source, we find a split ring commutator. The coil turns, but the commutator and power source do not. As the coil turns, it moves off of the box connector and as it continues to turn, it connects to the other box connector (the black boxes that you can see in the animation). As the coil turns, it reverses its connections to the external circuit and therefore the current inside of the coil moves in the same direction, but the current of the actual loop can be reversed. This so called armature (or coil) can that way continue to spin in the same direction all the time. Electric motors consist of many such coils/armatures to provide more uniform torque.

From all that we can see that DC motors are build up of:

The same concept can also be used in Electric generators, were the rotation of produces different directions of motion at different points on the circle and so generates a sinusoidal (AC) voltage.

Because Alternating current (AC) is easier to be supplied (then DC current) in homes, factories and most buildings and little DC batteries are not enough we need a way to run a motor from AC electricity.

An AC motor is build up of a ring of electromagnets around the outside making up the so called stator. These electromagnets produce a rotating magnetic field. Inside of the stator we have a solid metal axle, a loop of wire, a coil, a so called squirrel cage which is made of metal bars and interconnections (similar to pet cages) or some other freely rotating metal part that can conduct electricty. Unlike DC motors the power is not being send to the inner rotor, but to the outer coils that make up the stator. The rotor inside of the magnetic field is of course an electrical conductor and is affected by that field. The magnetic field is constantly charging and because of Faraday's law the magnetic field induces an electric current inside the rotor. The induced current produces it's own magnetic field and according to Lenz's law elliminates the difference in motion between them. The electromagnetic induction is why the motor spins on so that's why we mostly call them induction motors.

Here a pretty interesting animation that shows that rotation:

So, when do we use each type? The biggest advantage of AC induction motors is that they are simpler to make. The only moving part is the rotor, which makes them low-cost, quiet and long-lasting. DC motors of course have a commutator with brushes that wear out and are also relatively noisy because of the friction between those components. But, the speed of the induction motor depends on the frequency of the alternating current and so turns in a constant speed unless you use a variable-frequency drive. The speed in DC motors on the other hand is much easier to control, cause you just have to supply more or less voltage. DC motors can be directly driven by DC power. For AC motors we have to use an inverter that turns DC in AC.

Next time we will get into in-depth Exercises/Examples in everything that we covered in Magnetic field's and forces till now!