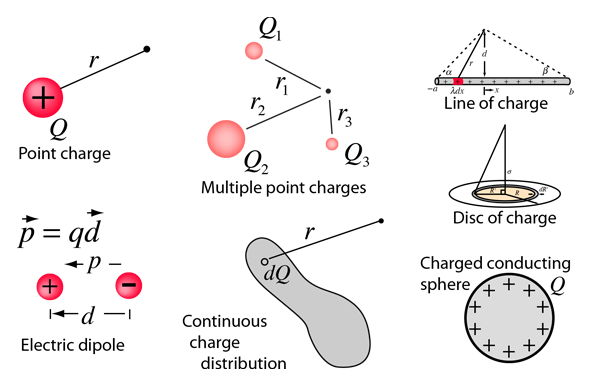 This picture shows exactly what we will get into today :P

Today we continue with Electromagnetism to get into exercises of potential! More specifically, most exercises will actually be applications of potential on different distributions of charge and because there are a lot of them we will continue on next time!

All the mathematical equation will be drawn using quicklatex!

I will first get into a simple example of electric potential and then get into the applications...

a) The force F applied to the proton

b) The work W produced by the electric field

Because the proton is positively charged the force and electric field are going in the same direction. This means that the Force is:

The work is simply the force times the distance and so:

The potential difference can be calculated using the work per charge and so:

For this "second" part I highly suggest you to read my post about Calculating potential first and mainly the tips!

Find the potential at every point inside and outside of the sphere.

Using Gauss's law in an application of a previous post we ended up with the following:

With the equations being:

Which means that if we take V = 0 at infinite distance away we get an equation that gives us the potential at points outside of the sphere with distance r:

The potential exactly at the surface is:

Here a diagram that shows this: 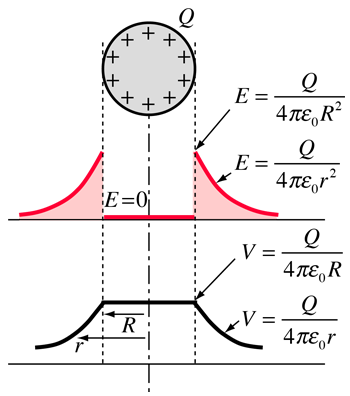 By using the equation outside of the sphere (or the one for point charges) we have:

Parallel plates and "another" equation for E

Calculate the potential at any height y between two parallel charged plates (top one positive).

The potential energy U from a test charge q' that is a distance y away from the bottom plate is of course:

The potential is supposed V = 0 exactly on top of the bottom plate where y = 0.

Considering this point being b and the point exactly below the top plate being a we have:

You can see that nothing really changes if there is a potential at the point b.

The potential is of course decreasing linearly to y while going downwards.

This means that the electric field is equal to the quotient of the potential difference by the distance between those plates.

This is of course only true for this kind of "geometry".

Either way, we can now see that the electric field now can also be calculated in V/m where:

Generally, the volt per meter is more commonly used!

Calculate the potential at a distance r away of a linear distribution of charge with density λ.

In a previous post we calculated the electric field of such an surface which is:

The potential of any point a to any point b (potential difference) in radial distances ra and rb from the linear distribution is:

If b is supposed a point with an infinite distance away then Vb = 0 and so:

So, by setting V zero at infinity the potential is infinite at any definite distance away of the charge.

Let's also suppose the radius of a being r.

For linear distributions any value of r works, but when having a cylinder then this works only for r's that are greater or equal to the radius R of the cylinder.

Electric charge is distributed uniformly along a thin disk of radius a and total charge Q.

Calculate the potential at a "axial" distance x away of the center.

Electric Field on the Axis of a Uniformly Charged Disk

So, this means that we already know the electric field, let's find out the potential now...

Because the distance r away of the "actual" charge can also be calculated using Pethagora and is:

we can also use this distance that gives us the potential as a function of x and so:

Potential is clearly a scalar unit and so doesn't need components and such things that make our calculations more difficult and so the electric field calculation is not needed, cause we just need the distance.

More specifically when x is much larger then a we can also approximate to:

This of course describes the potential of a point charge Q in a distance x.

So, when being far away from a charged disk the disk acts like a point charge!

Next time we will get into more examples/exercises of Electric potential!