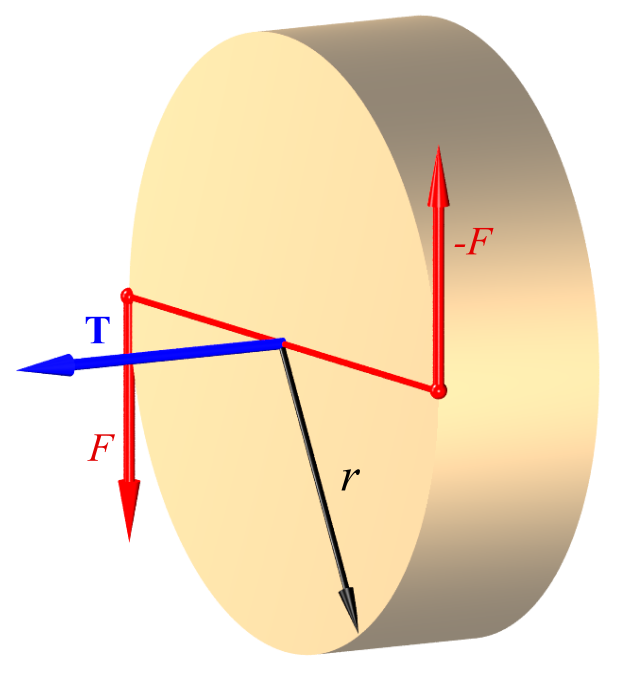 Hey it's a me again @drifter1! Today we continue with Physics and more specifically the branch "Classical Mechanics" to get into Work and Power in Angular Moton. So, without further ado, let's get straight into it!

In angular motion we define the change in position as the change of the angle θ. With that in mind think about a rigid body that rotates through an angle dθ from some point A to point B, while a force F is applied to a point P. As we described in a previous article, the position of this point is defined by the vector r. To make the calculation procedure simpler, let's suppose that the rigid body is constrained to rotate about a fixed axis O. That way vector r moves in a circle of radius r. The arc length s of the circle if equal to s = θ·r. Because vector r moves in a circle, and by also defining the change in angle as a vector θ we can end up with the following cross product that will give us the change in arc length as a vector:

From the small change in angle dθ and because dr = 0, from the assumption of having the rigid body fixed on O, we get:

From the definition of Work in integral form we obtain:

So, the total work done on a rigid body is equal to the sum of torques integrated over the angle which the body rotates. A more descriptive way of writing the formula is:

If the complete body rotates through the same angle the so called incremental work is equal to the sum of torque times the common incremental angle dθ:

Similarly to Translational motion, the Work-Energy Theorem also works for Angular motion. Thinking about a rigid body rotating around a fixed axis we have:

For Rolling motion (translational + angular) the Kinetic Energy for A and B will be equal to the sum of each kinetic energy, as we described in the previous article:

As you might remember, Power is equal to rate of doing Work. So, it's the change of work over time. Thinking about a constant net torque and the simple equation of Work that we defined previously (W = τθ), the power of angular motion is given by the equation:

Examples around all the equations that we covered today and in the most articles, will be done in a separate article, when we are finished with angular motion!


Mathematical equations used in this article, where made using quicklatex.