The National Endowment for Democracy. 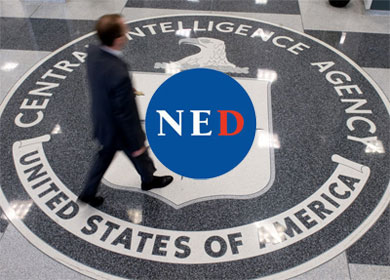 My Thesis: There is unity in the apparent contradiction between Washington politicians and the revolutionary terrorism that seems to be coming home from foreign parts to roost and feed on America itself. One way to make sense of it all is to follow the National Endowment for Democracy.

The National Endowment for Democracy is funded by Congress, but not all of Congress as a body votes on funding the NED. To be more accurate, the NED is funded by imperialist minded congresspeople from both parties. This informal group whose membership changes but whose group philosophy remains constant is comprise of congresspeople who occupy key committees which govern foreign policy, Intelligence and financing. McCain was a leader of this faction and Lindsay Graham has taken his place.

This permanent faction pipelines money to the NED and the NED uses it to finance Non Governmental Organizations which function as revolutionaries in other people's countries. By shifting money and power to NGOs this nameless but very real faction is shifting money and power over US foreign policy out of the public purview and off to the murky authority of secret Intelligence.

For instance, the NED funds one NGO called the Oslo Freedom Forum that trained the street fighters led by Josh Wong and Jimmy Lai which have caused so much trouble in Hong Kong. NGOs connected to the NED and to USAID, allied with native Neo-Nazis, brought down the government of Ukraine. And the riots which did that coup in 2014 are very similar in tactics, strategy and intent to what happened in major US cities in the summer of 2020, you may notice.

BLM/Antifa (and they should be considered as one army since George Soros funds them both and they work together seamlessly) used mayhem, looting, burning and even worse crimes to cause widespread fear and discredit the presidency of President Trump while he was trying to organize his re-election campaign. BLM/Antifa used violence against everyone who wished to listen to what Trump had to say, attend his rallies, attend lectures by conservative minded speakers, or wearers of the red MAGA hat who could be suspected of wanting to support Trump and vote for him. Thus it was that BLM/Antifa deserve to be classed as an NGO employed to disrupt and destroy a government, with the only real difference that their targeted government was and is that of the United States of America. Thus it is demonstrated that when power and money are shifted into the dark areas of “Intelligence" covered by “classified top secret” this power takes on an immortal life of its own.

BUT, at this juncture a subtle point needs to be driven home: when people say "the US government" funds the NED and starts revolutions in foreign parts that gives the "US government" a unity it really does not have. It makes people assume that the elected, constitutional "3 branches" have control over these illegal activities that they, and the American people, don't really have. This makes for confusion and delusion. People see the Black Lives Matter “movement” attacking governments and cities and society in general and some critic like me says this is an "NGO" staging a Colour Revolution against the USA (the colour being Red and Black, the fascist/anarchist/communist flag colours) and people who have been long schooled, by such apparent critics as Noam Chomsky and his New Left followers, in the fixed idea that "the US government funds revolutions" will say "How could the US government be attacking itself? Not possible. So BLM and Antifa must be grass roots Movements". Even I have to use all my powers of logic and all my knowledge to overcome this mental block. I am a recovering left liberal myself.

The legal US State, the three branches of the US Constitutional, elected government, Legislative, Executive and Judicial, does not fund the National Endowment for Democracy. The Deep State funds the NED. What do I call the “Deep State”? This is an organization hidden in plain sight. It is a permanent group composed of Washington politicians, military officers, Intelligence officers and bureaucrats in the civil service and the Departments of Defence and State and Justice who are loyal to and beholden to the Military Industrial Complex. The Deep State has a political and even philosophical purpose. The Deep State is dedicated to advancing US global military and political hegemony. Arms industries and Intelligence executive agents are the core of this occult power complex; so selling arms, expending arms, seeking more world violence to justify military and Intelligence spending, this is a core reason for the Deep State’s inordinate and stubborn secret power over what should be US foreign policy as determined by the democratically elected Congress and White House and what should be the independent Judiciary.

The Deep State (or one could say their secret army, the CIA) is that entity which Senator Daniel Inouye described so chillingly in 1987: "[There exists] a Shadowy Government with its own Air Force, its own Navy, its own fundraising mechanism and the ability to pursue its own ideas of the national interest free from all checks and balances and free from the law itself.”

I have one cavil with the late very great Senator Inouye. The Deep State and the Intelligence Community that serves it are not promoters of the real national interests of the USA and its people; they are promoters of their own interests. Democracy and Secrecy are on very divergent and diverging paths.

The media (a very consolidated US and global media) would have us believe that the violent communistic/fascistic revolutionaries operating in foreign countries have nothing to do with the violent revolutionaries with exactly the same avowed political orientations operating in the USA, BLM/Antifa. But I see that those deadly ducks over in Syria or Ukraine are quacking and waddling just exactly like BLM and Antifa are quacking and waddling over in our neighbourhood so I say they all have to be ducks of the same species.

A man who says he loves his Mom but encourages his half blind old mother to drive a car even though she has twice nearly killed herself is unconsciously trying to kill his mother; pay no attention to what he says, pay attention to what he does and infer from that his real, though unacknowledged, intention.

In the case of the hypothetical man the intention is unacknowledged because it is unconscious. In the case of BLM and Antifa the intention is unacknowledged because these people lie; they say they are after justice for the people but what they are really after is revolution to remove Trump, or anybody like him, from office and the police from power and instal a Democrat, not a democratic, government – a Deep State government, a permanent bureaucratic oligarchy with the shadowy “Intelligence community” of alphabet agencies as their not-so-secret police. The Deep State funds the NED and it also, through Soros and Bezos and Gates and other such "CEOs", funds these "domestic" terror groups. The Deep State has lost patience with American democracy and the USA as a sovereign nation. If they can install so empty and foolish and corrupt a president as Joe Biden the revolution that began with 9/11 will have been completed.

Trump is, or was, a very inadequate "Horatius at the Gate" to stop the Deep State and he is really very alone. He is no JFK but his situation during his presidency resembled Kennedy's situation in that he had enemies in his administration and he only knew of some of them. I don't support Trump so much as I respect the hopes of the people that elected him who hoped that the Constitution and the prosperity and liberty of the USA and the working people would be restored.

This is not the intention of revolutionary terrorists nor is it the intention of the super wealthy in LA and New York who are beholden to the Deep State. These two factions, the political and business elite and the street fighters they are responsible for funding, training and arming are one and the same. Their purpose is the same: to overthrow the government and upturn the very society of the USA and replace it with a totalitarian government and a compliant society of subjects. The way to do that is anarchism. Anarchy, anarchist chaos, mob violence, is always a precursor to the police state which their disorder makes necessary.

This is my thesis and it sounds pretty bleak. But I'm no genius and certainly no god. There is still the virtue in the people themselves. I see it in people who refuse to wear those idiotic masks and who refuse to stop being close to one another. This is the common humanity that has survived the ages.