@ntowl is a terrible influence. Making me want to participate in NaNoWriMo and put myself through agony and torture during the already torturous month of November. 😅

November! A month of 36 degree Celsius days and 9999999% humidity. A month where school is still in session so I must walk 12km every weekday, in said heat and humidity, and sometimes afternoon rain storms. A month where I'd rather sit and stare at a wall than do anything due to feeling drained from heat and exhaustion.

If I'm going to do this, I'm going to need to feel some ✨⭐️excitement⭐️✨ about my work. Something to pull me through the blughghgh after yet another hot, draining, exhausting day. Without that excitement, there is nothing.

And that, is the point of this post. To write about my writing, my works, my fiction, and get some intense inspiration pounding away in my mind where alternate worlds linger. And I promise I won't whinge too much about how NaNoWriMo should be held in December or January when it's school holiday time and I have no legal obligations to leave the house.

So, if I were to participate in this year's National Novel Writing Month, what would I write about? What is the story that wishes to be told? This story came to me a few months back when I was so excited about the idea that I even found the perfect premade book cover for it and purchased it instantly. This is a book that will definitely be written at some point, but, will it be written in November or will it take a couple of years? That is the question.

I mean, if I could get at least 10k words of it written this upcoming month, that in itself will be an accomplishment worth celebrating. To be fair, I already have about 12k of words for it scattered here and there thanks to a previous failed NaNoWriMo styled event.

If you're reading my babblings, chances are you saw my struggle to write a strange semi-apocalyptic story with two men in it. Henry and Sebastian. (@owasco will remember!) I loved the idea of my story but I just couldn't get past Henry. I created a character in my mind whom I hated. He was bringing me down and I didn't want to write him. If I was ever going to write him again, he would need a personality adjustment.

In this story, I plan for Henry and Sebastian to return to the forefront! Sebastian will still be a loveable, happy-go-lucky, "it-is-what-it-is" type of person, but Henry will most certainly no longer be a depressive, blue, twat. He'll still be "down," the story requires it, but not so down that I want to stab him in the fictional face with the fictional claws of my fictional creatures.

Alexandria is a young woman neglected from birth, abused by those who are meant to love her, and blessed by a powerful being from another realm. Desperate to find refuge in the other realm, she performs ritual after ritual in an attempt to free herself only to unintentionally fulfill the powerful being's secret desire -- to meld the two realms into one that he can rule over.

Chaos ensues. In the short span of ten years the world becomes overgrown, apocalyptic, and nothing is as it once was.

Henry and Sebastian are friends pulled into the madness, their every abhorrent action a method of ensuring their daily survival, and seek their own escape from this new life they reprehend and did not wish for. Forging terms for an escape ends in deceit, separating the men from one another and forcing them to find their own paths; Sebastian a thrall under orders to "rebalance" power and Henry an ally to bush creatures once believed myth.

Can Sebastian bring balance to the chaos or will he bring further ruin to the world? Is it possible for Alexandria and her Demon to be overthrown? Will Henry ever find his friend again? ***

***Not an actual blurb, but gives the gist.

I've been writing the first chapter on and off for the past couple of months. I keep changing my mind with it, as is my way. The First Chapter of Vengeance changed so many times before I finally settled on what it is now.

...the first chapter of Half Past the Moonfall stayed the same though. So give me some credit! 😅 I'm not entirely indecisive.

At the moment, with The Worldmeld, I've come up with two possible First Chapters.

The first one involves living through Alexandria. This is the opening couple of sentences: 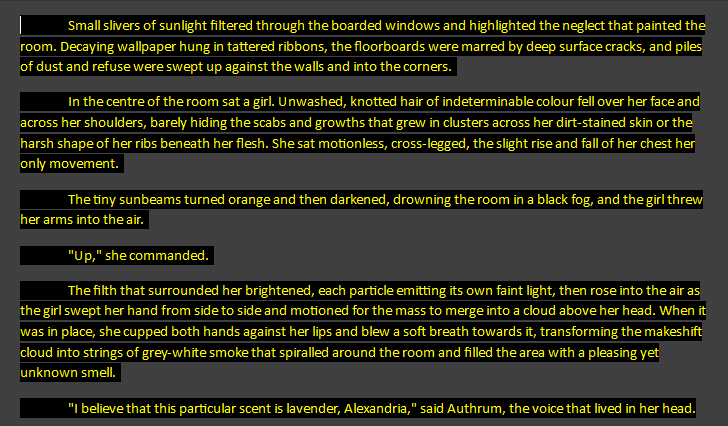 If this is the First Chapter: we will observe what happens to Alexandria, watch her power explode, and see as she ushers in a new, unexpected world entirely different to what she hoped and dreamed. You will know her, know what she's gone through, and maybe understand her a little when we come across her again later on in the story.

I haven't written my other First Chapter idea yet, but it is as such: instead of observing the ground zero of events, we watch as it happens through the eyes of Henry as he is at work. We will see in real-time as the chaos explodes, as powerful beings from another realm burst into our world with Authrum at their helm, dragging Alexandria with him as he lays his claim upon Earth.

In both cases the Second Chapter will be from Henry's point of view, ten years after the events of the First Chapter.

I'm leaning more towards Alexandria's POV being the first chapter. But I suppose, it's also entirely possible to put a little page-liner after it all goes down then introduce Henry's POV as it happens.

Alexandria will have a couple of chapters of her own later in the story too. So, I guess it makes sense to introduce her early on as well, and the role she played in melding the realms together.

I don't know. A part of me wants to join in on the NaNoWriMo "fun", but the more logical part of me knows I'm going to be too exhausted to bother.

I guess I will do what I can. 🙂 With no expectations to actually succeed. But even if I write one or two chapters, at least it's more than what I had before.

Thanks for stopping by and reading my excessive babbles. ❤️