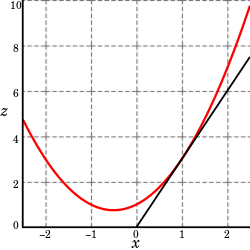 Hello it's a me again drifter1!

Continuing on with our Mathematical Analysis series of Mathematics we today will talk about Partial Derivatives.

Those "new" derivatives are based on the "normal" ones and so I highly suggest you reading my post about that here before getting into this post...if you don't know about them already!

What does a derivative describe?

When having only one variabe, the derivative of course describes the angle/rotation of a function's curve to the x axis.

So, the derivative of a function f(x) with x describes the angle towards the x-axis.

But, what about functions of more then one variables?

Well we saw that limits, continuity and more can also be described for such functions, but we don't talked about differentiation yet...

Depending on the notation the derivative at the position xo is given by:

So, the derivatives are based on an specific quotient limit...

Because we can clearly see that the "dependence" variable (x) is in the denominator we start thinking about a way of describing derivatives for one of the independent input variables. This exactly is what a partial derivative is.

If this limit exists (is a real number) then the value is called the partial derivative o f(x, y) with x at the point P(x0, y0).

By doing as we did, we actually define a new function f(x, y0) that is dependent only of x.

Using the same principle the derivative of f(x, y) with y is:

The Partial derivatives are:

We can clearly see that the "other" variable is being treated like a constant.

What does the partial derivative describe?

Well, it again describes the angle of a curve...

This curve will be different depending on which variable we choose to derivative with.

But, how can this be useful?

The derivative of a vector function is based on partial derivatives.

We define a derivative along the curve as:

where these elements are:

But, because the functions are "complex" we have to use the rule of composition.

If we had 3-dimensions the derivative would look like this:

Both use directional derivatives that we will talk about next time...