Hello it's a me again drifter1!
Today we will get into the promised examples/exercises for the whole Multivariable-part of my Mathematical Analysis series and so for every post starting from Vectors, Lines, Planes up to Surface and Contour Integrals.

I will try to solve them in detail so that you understand every bit of my procedure of thinking and why I apply each calculation, theorem etc.

Also, I will try "splitting" them based on the subtopic they are about...

Suppose we have the following Planes/Surfaces.

The angle is of course equal to the same angle of the normal vectors N1 and N2 on top of surface E1 and E2 correspondingly.

Using the coefficients of x, y and z for each plane we can find the corresponding N'vectors and so:

The crossproduct of them gives us the following determinant:

Because the crossproduct is |ab| = |a||b|sinφ we find the angle like that:

Suppose a surface E that:

Calculate the distance of the center O(0, 0, 0) to the surface and so:

N is of course a normal vector of the plane and because the plane also passes from P we have:

And so we end up with a system of 3 linear equations:

and so because P' is on top of E we have:

By putting this values in the equations of before we end up with:

Suppose the linear approximation of a curve r(t):

Find the line ε that:

Because ε is vertical across it's parallel to the normal vector N.

And so from the parametric representation of a line we have:

By using the normal vector N we can also find plane E that contains the Point Pt.

We know that Duf(P) is between two values:

And so the highest possible increase is:

The highest possible decrease is of course the negative of that...

And so the range of Duf(P) is:

Suppose we have the total differential:

Find a function f (if it exists) that has this df.

From theory we know that:

df = Mdx + Ndy represents the total differential of a function f only if:

that can be easily proven...

Let's check if that is true...

We can clearly see that My = Nx and so there exists an f with this df. 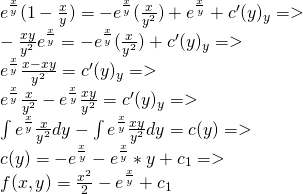 The "inner" integral doesn't contain x and so is a "constant" which means that:

Because we have an subroot we substitute using:

which gets us to the range:

Tranform the contour integral to an Surface one:

Using Green's theorem we get:

Changing to the polar coordinate space we can also get:

Knowing the ranges of x and y (or r and θ) and so the Area R or G we can then calculate the actual value of I.

And this is actually it for today and I hope that you enjoyed those examples!