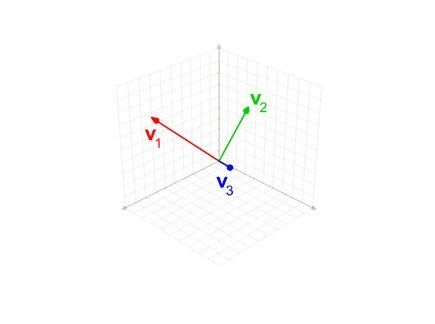 Hey it's me again! Today we will continue with Linear Algebra getting into Linear Combinations and Independence. At the end we will also talk about how all this is useful in Matrixes and Linear Systems. I would suggest you to read the previous post about Linear Vector Spaces first :) So, without further do let's get started!

So, after this example and little theory you now should know that a vector space can be defined or generated by many different combinations of vectors. So, R^2 = span{v, w} = span{e1, e2}. We will later on get into which one is "better".

Some other things that apply to the span are:

The first one is self-explainatory, but let's get into an example for the matrix one so that you get a smooth transition into linear independence.

So each vector w is a linear combination of this vectors:

The question is: Are some of those vectors maybe unnecessary?

So, we proofed that these 2 vectors are unnecessary to be used or are linear dependent.

But, if you check it out again you will see that we can also use the other vectors for the span and so:

If any of the ci was non-zero than we would say that they are linear independent!

Basis of a Vector Space:

So, the vectors e1, e2, ..., en of a vector space V are basis vectors, cause they are linear independent and also generate the vector space. The basis that we get using those vectors is called the standard basis.

Something that will get us into the dimension of a vector space is:

Dimension of a Vector Space:

So, we can see that:

So, when knowing the size we can also know if a given subset is a basis of V or not. Suppose dimV = n and vectors w1, w2, ... wn of V are linear independent, then this set also generates the space V ( V = span{w1, w2, ..., wn} ). In the same way if we know that dimV = n and the vectors generate the space V we know that these vectors are linear independent.

We can use all the stuff we learned today in Matrixes too.

We can also find relation between homogeneous and non-homogeneous systems.

Theorem with A being a mxn matrix:

So, when does AX = b have a solution?

Well, suppose a matrix A mxn then:

The following sentences about a square matrix nxn are equivalent:

And this is actually it and I hope you enjoyed it! I know that I put a lot together today, but I had to say all that so that we are finished. Next time we will get into some examples of Linear Systems so that you see where all this stuff we talked about today is useful.