The vest of an old man tired of suffering 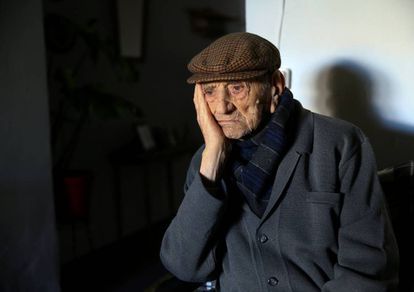 The young assistant was rambling on about nothing, and the old man was drowning every word he spoke in his thoughts as he looked out of the car window.

It had been three weeks since the old lady had come to see him. She was no more than a superstition old woman, but she had come to him to seek his help.

“Will you help me?” she had asked, looking up at him.

She held out her bony, swollen hand to him. On her finger was a small ring. Against such a benign gift it looked like shame.

“That ring,” he said to her, “is the most powerful spell in the world. It holds the power of life and death.”

“Will it help me?” she said, looking into his eyes.

The old man cast a long look back to the window and saw the rain pour down.

"Death is nothing. We all die eventually. Why not start today?" said the old man as he reached over and took the ring from the her weak hand. He was about to put it back on her finger, but he paused.

Slowly and carefully he began to turn the ring round between thumb and finger. As he turned it, the ring started to bleed. As he lifted it, it turned a deep, dark crimson in the palm of his hand.

It was a sign – the sign he had been seeking. He now understood what he should do for this lady. It was up to the old man now.

The old man stood up, opened the car door and holding the hand of the lady, he said, "I am sorry M'am, but there is no life without death. You must come with me. There's quite a storm coming. We must get off the road before that one’s a proper blow."

He looked up once more to see the lightning flash and the rain falling. He nodded his head in satisfaction.

"Nice bit of rain," he said, gently closing the car door with the old woman into the back.

He looked across to his young assistant sitting on the opposite side.

"Keep an eye on her, son. Don't leave her out of your sight. If you look now, you will see her die."

The young man gave a little whistle. He was petrified.

"But how?" he asked nervously.

"She is an old woman. There is nothing about her that can keep her alive any longer - nor do we need it," said the old man.

"But she was still standing back there, and ... hey, wait a minute!" he said, as the old lady suddenly disappeared from his sight.

"How could you tell me she was still standing back there when she is here now? And how could you have gotten her back to the car?"

The old man turned from the window and said, "Find out for yourself."

The old man was a big, strong man, but the storm was much bigger and stronger. Each flash of lightning and roll of thunder was larger than the last. Rain slapped in to the car as the winds flew around it.

But the old lady, now seated next to the young man, showed no sign of fear. She had waited all her life for this moment. The young man, suddenly eager to understand, pressed his hand on the old lady's leg, and a small light appeared.

It grew faster and faster. It grew so bright that the young man had to close his eyes. When his eyes came open again, he was looking right into the face of the most life like woman he had ever seen in his life. Her eyes were alive with bright excitement. Her lips moved slightly as her breath came faster. Her icy fingers touched the young man's face and stroked it lightly; her smile was so bright that it burned like a second sun.

She looked up at the man and asked, "Do you see me?"

The young man shook his head and said, "I can't... I find it hard to believe."

The old lady leaned over and whispered, "Remember, I am you, and you are me, and I am you."

"I can't, I still find it hard to believe," said the young man in response.

The young man opened his eyes and said quietly, "I think I will have to check this again."

There was a flash of light for a few seconds and when the young man looked again, the old lady was gone.

His old master looked at him and said, "There is no one inside. She is gone."

The young man said, "I wanted something like this, but I never thought I would have it at this time. When will we arrive to bring her new body to?"

He had been thinking about that since they left the old woman by the side of the road.