The pact of the devil and an angel 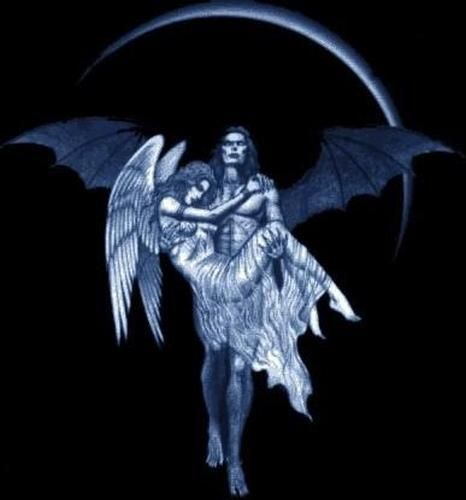 This is a story of a man named Khima, who lived during the time of the Haradrim. He is one of the Haradrim who live outside of Gondor, and lives in the land of Harrowdale. He is known to be a very kind and generous man. Khima had a wife named Mary. She had two sons by Khima, named 'Daniel' and 'James'. These friends were liked by everyone, for it is said that they had a stronger bond than Khima ever had with his own sons.

A while before the story, the Harrowdale farmers were worried for the very reason that Khima supposedly had a pact with the devil. It is said that the devil would always have his eye on that area. Not a day would pass without hearing that story. Neighbours would always taunt the men in the valley for having that pact with the devil. This would lead to the men in the valley speaking about this in the long nights.

The wives came to believe that their men were suspiciously sleeping around or something like that. Finally, this led to all the wives believing that their own husbands were having affairs outside.

On one particular night, it is said that the two sons of Khima, Dan and James, came to visit him in his home. The sons wanted to discuss with him about something they wanted to ask him. They were fearful that their parents might start to believe the rumours, causing them to break up the family. But if this was the case, they wondered what the men in the valley would tell the neighbours.

Khima told his sons that they should not worry, as he was calm about his situation. Furthermore, they could talk about this in the following day when there was light. He said that he did not want to say anything more about the matter that night. But his wife, Mary, was writing down all this. She was listening to her husband's conversation.

The sons left, and Mary went to attend to her husband. Khima was asleep. She told him that she had overheard what they were talking about, and told him that he should have not said anything about what he had. She said that she had heard that the devil was always staring at him and would come to collect the contract.

Khima was not aware that she had learned about it. He asked her if she was still writing all this down. Mary replied that she was. She said that, in the meantime, the devil had already collected on him.

Khima woke up, and told Mary to leave. He told her that he was afraid of the devil. Furthermore, he was afraid of his wives being to learn of this matter. Mary said that she had already checked on the matter, seeing that there was no proof of this. Mary was an extremely intelligent woman, and could read without knowing how to read. Mary also attended to her husband in studying. She was absolutely aware of her husband's situation, so she knew that there would be no proof of the devil's existence. However, nobody in the valley would know of the secret Mary possessed, and would not know that the devil did not exist.

The devil, on the other hand, was very much aware of Mary's existence, but did not know about her brain. He had heard about Mary before the two sons had a visit with Khima. It is said that the devil always attends to angels, but that had cost him to lose both his ears. The earless devils always scolded him, and they told him that, if he was to be involved in the satanic business again, he would lose his eyes. Since then, he could only learn out of context. However, he was aware of Mary, and had been looking for her.

The devil was furious at the sons for having let Mary learn. He sent a messenger down to Harrowdale, where he told the messenger to warn the men and the wives of the valley about the matter. The messenger told the men that there was a pact, and told the wives that there was none. He also told everyone that the devil had heard of Mary, who possessed either a pact or a pact that was deprived from her. The messenger told Mary that she should come and warn her of the matter, and that Mary was the one who could save them from the devil. But Mary did not believe him, and as a result, the devil had collected the first debt that Mary had with him.

The devil came by the house in which Khima and his wife lived, and Khima woke up. But Mary was not there, and Khima was about to fall asleep again. The two daughters of Khima were also frightened at the fact that Mary was not there. Khima told them that Mary is outside. When Mary found out about the messenger, she went out to the barrow. Khima was outside the door, and both brothers and sisters were outside as well. As Mary arrived, she saw a huge mound of flesh. It was the devil, and she was frightened of him.