In 2004 Scott and I visited Fort Worth, Texas, and saw a place full of beauty, history, and opportunities. Within 30 days of our visit, we moved to the area. From that move forward, we have allowed travel to have an effect on us as a couple and as individuals. These effects range from new experiences, making new friends, to finding surprises in history and activities.

Scott and I met through a medieval recreation society called The Society for Creative Anachronism (SCA). This is a non-profit organization that celebrates the culture, art, and history of pre-17th-century Europe. He was involved in what is called bardic which is storytelling, and I was becoming interested in period hand embroidery styles. This organization enabled us to make friends all over the Texas and Oklahoma area causing our move to the Fort Worth area rather simple. From 2004 through to 2008 we didn’t do much travel except to attend SCA events. 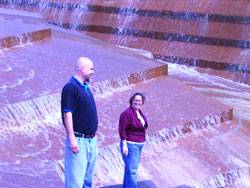 In late 2006 we moved from Texas back to Oklahoma for a while. We lived in Stillwater, Oklahoma, and it was there we discovered something very interesting, the back roads in Oklahoma were wrapped in history. It was at that time we put together our very first travel blog called Backroads Oklahoma. Unfortunately, we did not keep the site and all of the information is gone, but it was the very start of us deciding to do more with the travel than just “go”. On that website, we traveled throughout Oklahoma from Tulsa to Oklahoma City finding places like Ingalls where the famous shoot-out between the Doolin and Dalton gangs happened, the Washington Irving Trail Museum where the adventurer camped while surveying the area, and many other old forgotten relics of Oklahoma.

Eventually, in 2009, the moving bug bit us again sending us back to the Fort Worth, Texas, area. It was about this time Scott and I began to explore the Dallas-Fort Worth Metroplex in full. We started finding places like fields full of sunflowers for miles and miles all around Waxahachie, hippos in the middle of Irving, and many different festivals. We then started to get further away from the maddening crowd of Dallas to find Texas had so much more to offer than just pavement, the Dallas Cowboys, and water features.

It was about this time Scott had started to learn to play the guitar and was wanting to play more and more Irish music. He had already been obsessed with music and the Irish folk scene, but it was starting to influence what he wanted to do. At one point in 2012, we went to Austin, Texas, for this very reason. He wanted to go to Fiddler’s Green Music Shop because it was a very active Irish Folk Music place. We explored the capitol building, the old downtown and the famous Sixth & Congress intersection where many singers and songwriters have found themselves like Nancy Griffith and Willie Nelson. This was a huge thing for us because we had talked about going to the capital many times, but we actually found ourselves there in the middle of history for the state we had fallen in love with. We both decided to start stepping out of our comfort zone and travel farther away from home. 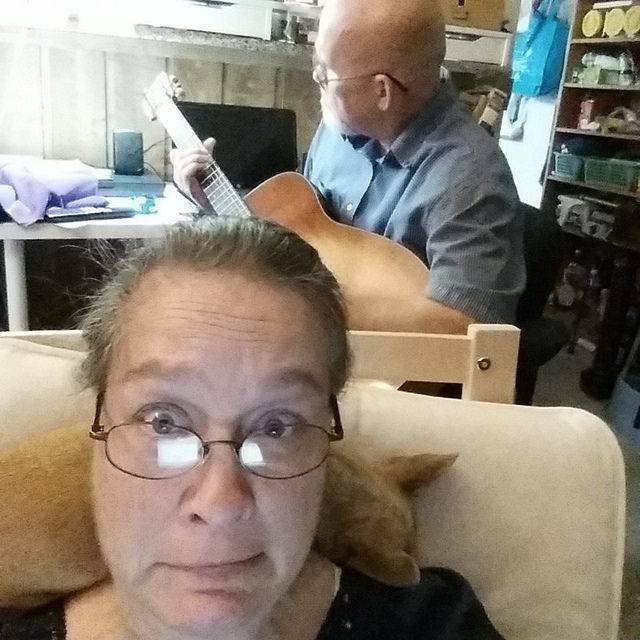 I, of course, have been crazy for hand embroidery for a long time and decided it was time to really focus on it. During the time Scott was learning to play the guitar, I started focusing on needlepoint canvas painting. I searched the internet for information to learn how to do the painting and there was nothing. Completely shocked, but I eventually found some experienced painters that were so extremely helpful. Between this, the commissions and me learning new embroidery techniques I was very busy and enjoying my time. I often was able to do embroidery as we drove down the road to onto our next adventure or even did some work as we sat by the campfire in the late afternoons. It was a perfect set up for me and the embroidery.

In the fall of 2013, Scott and I decided we were eventually going to move into an RV and live in it permanently, traveling across the United States. We just were not sure how or when we would go through with this, but we were going to start moving that way; eventually. Less than a year later we discovered a whole new world, the Texas State Park world. We had visited Dinosaur Valley State Park in 2004, but we had not thought about them until 2014. It was this recent visit that we made the decision to go to every single Texas State Park. We would purchase a patch from all of them that had them and get a photo of us with the park signs. Once we were on number four learned there were 98 parks. This was going to be a task! Fortunately, we are not the only people doing this, there have been three people/couples who have succeeded in doing this and so we know it is able to do. 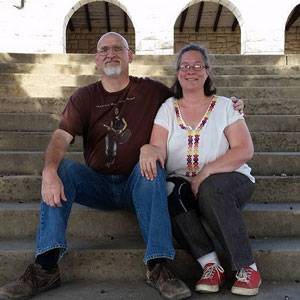 The photo was taken by Angie Bracken at Meridian State Park.

Spring 2014 we started sorting and purging everything in the 2,000 sq ft house. We had garage sale after garage sale and donated so much stuff, but we were finally able to get down to a small apartment amount of furnishings. In March 2014, we moved into a 547 sq ft apartment. What a bit of shock; it was so much smaller than the house! The apartment was small but we intended to spend as much of our time out adventuring so it isn’t a big deal. In 2016 we decided we really needed to focus and make the footprint of our living space much smaller so we sorted and purged, yet again, then moving our lives into the bedroom area. Granted this did not include the bathroom or the kitchen, but it did help us to see we were quite capable of living in a very small space.

Then it happened! February 24, 2017, we purchased our home on wheels. It was a 1982 El Dorado Firenza; she was an all fiberglass frame on an Econoline van chaise. We proceeded to do the minor renovations needed so we could live in it for two weeks while we assisted Eisenhower State Park with some Spring Break help to see if it was truly something we wanted to pursue. Packing up a few things, we headed to Lake Texoma area and found we never wanted to leave the park; we were finally home. 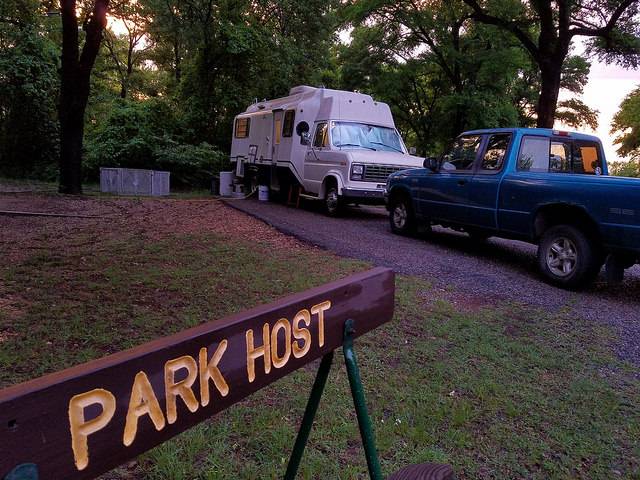 August 2017, we moved to our family home of Tulsa, OK, and thought we would be remodeling the RV. Because of some major water damage in the roof and more work than we were able to do ourselves, we decided to sell our home on wheels. It was bittersweet to see Beast move on to a new stage in its life, but we know this was the best decision. The couple who purchased him are young and have many dreams of traveling in him with their friends. But where does this leave us now? Will the traveling end? Will we settle back into a box sort of life?

Not at all! To be honest, travel has become even more crucial to us. Because we are now in a small apartment building that was built in 1910, we are finding it more important for us to get out of our “box” to remind us that there is still a huge world out there to explore. Since moving into the small one bedroom, we have traveled to 40 counties and finished the state of Arkansas. This is not counting the travel we have done in the counties we have visited prior to March 2018. Travel has shown us that people are people, no matter where you go. All of us want to be happy in our lives, love our family and friends, and want to be accepted. Since we started this County Collecting we have found new cultures, traditions, and acceptance. Travel opens the mind and shows you that you are not alone in how you think and feel causing you to become more accepting of others. Go ahead, get out of your comfort zone and see how far travel takes you; you will be surprised by how much you grow.

Thanks so much for taking the time to read this and hope to hear from you soon.
Scott & Ren